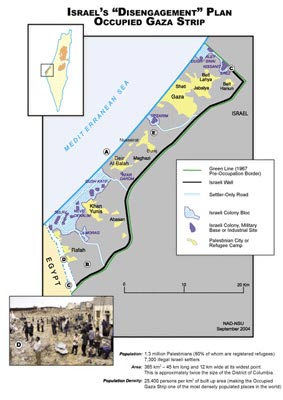 The Gaza disengagement was part of a unilateral plan adopted by the Israeli government without consultation with the Palestinians, although with the approval of the U.S. government. According to the plan, Israel would continue to assert sovereignty over all of Jerusalem and large Israeli settlement blocs in the West Bank, while withdrawing its settlers from Gaza and isolated settlements deep inside the West Bank.

The disengagement began in August 2005, when Israel evacuated approximately 8,500 civilians from 21 settlements in the Gaza Strip, and 500 more from four small settlements in the northern part of the West Bank - about 2% of the total number of Israeli settlers in the Palestinian territories. Israeli troops began to deploy outside of the Gaza Strip, while still controlling its coastline, borders, and airspace. Israel continues to provide Gaza water, electricity, and other vital services. Israel also claims the right to intervene militarily, including preemptively, in "self-defense." In a sense, this represents a change in the form of military occupation from direct to indirect control.

Dov Weisglass, a close advisor of Prime Minister Ariel Sharon, stated in an interview with the newspaper Haaretz in October 2004 that the plan was intended to put the peace process in "formaldehyde," to postpone the creation of a Palestinian state indefinitely, and to relieve pressure on Israel to make further withdrawals from the West Bank.

Palestinians in the Gaza Strip welcomed the opportunity to be free of direct confrontations with the Israeli military, and expected improvements in their daily lives. However, Israeli forces are just over the horizon, and continuing Israeli settlement activity in East Jerusalem and the West Bank will likely lead to further outbreaks of violence.

Many Palestinians see the Gaza disengagement and the intensification of colonization of the West Bank as two faces of a unified policy whereby Israel will rid itself of responsibility for Palestinians, while maximizing its control of their land.

Since its withdrawal, Israel has heavily restricted the crossing of people and goods, including humanitarian assistance such as food and medical supplies, into Gaza. This is despite an agreement brokered by U.S. Secretary of State Condoleezza Rice in November 2005 under which Israel agreed to permit the entry and exit of goods and persons into and out of Gaza. These restrictions have led to an alarming deterioration of the humanitarian situation in Gaza, deemed by the International Red Cross and the United Nations as on the verge of disaster.

Since the disengagement, Israel has fired thousands of artillery shells into Gaza with the stated purpose of countering the firing of homemade rockets by Palestinian groups into Israel. In June 2006, Israeli forces reinvaded Gaza, mounting two major military offensives resulting in the deaths of 387 Palestinians. Israel withdrew from Gaza on November 15, 2006, yet continually threatens to reinvade.