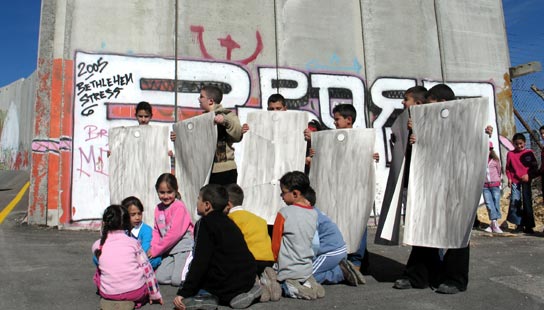 In October 2003, Israel began construction on a "separation barrier" in the occupied West Bank, justifying it on security grounds. The barrier consists, in places, of a wall twenty-five feet high, razor wire, trenches, sniper towers, electrified fences, military roads, electronic surveillance, and buffer zones that sometimes reach 100 meters in width. If the wall is completed as currently planned, it will stretch more than 400 miles in length. While its final route is the subject of dispute, much of the wall will be built on lands confiscated from Palestinian landowners within the West Bank - not within Israel's own territory. Many Palestinian homes, business, orchards, and other valuable assets in the route of the wall have been destroyed.

In several places, the wall intrudes deeply into the West Bank to encompass Israeli settlements on the western side of the wall. Some Palestinian towns and villages have been almost completely surrounded, and Palestinian farmers separated from their lands. Approximately 242,000 Palestinians will remain on the western side of the wall, isolating them from the rest of the West Bank. Separate fences and walls are being constructed around other Israeli settlements in the West Bank, and a highway network linking the settlements to Israel is underway. Israel has imposed administrative measures in the vicinity of the wall, requiring Palestinians to obtain permits to remain in their homes or access their lands. Jews are not subject to these restrictions.

The wall has been challenged repeatedly before the Israeli High Court, which has several times ordered the military to re-route specific sections of the wall, although the court has held that a wall built on Palestinian lands does not, in principle, violate international law. However, the wall must be militarily justified and conform to the principle of "proportionality" (that is, that the burdens imposed on civilians are proportional to the security benefits achieved through the military's action).

The wall was also the subject of a case before the International Court of Justice. The ICJ ruling, announced in July 2004, held that the wall is illegal, must be dismantled, and ordered Israel to compensate Palestinians damaged by the wall's construction. It also called upon third-party states to ensure Israel's compliance with the judgment. Although an advisory opinion, and therefore not binding on the parties, the ICJ judgment is an authoritative statement of the status of the wall in international law. In the course of the opinion, all fifteen judges of the court found Israeli settlements in the Occupied Territories, including East Jerusalem, to violate international law.

Photo: Palestinian children from the Open Window School in Bethlehem staging a theater play about opening the wall, under the watchful eyes of Israeli border police, near the main checkpoint in Bethlehem. (Rami Swidan, Maan Images)