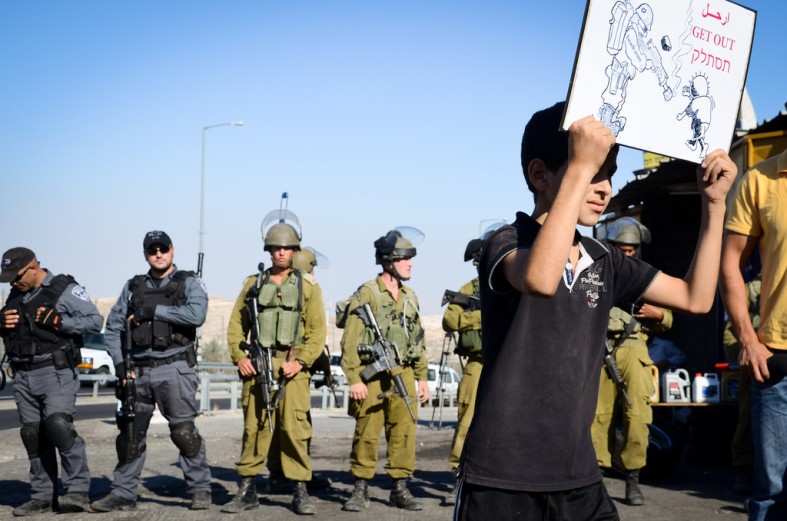 June 5, 2012, marked the 45th anniversary of the start of the 1967 War, when Israel launched a surprise attack against Egypt and began its military occupation of the Palestinian West Bank, Gaza Strip, East Jerusalem, and Syrian Golan Heights.

Since that time, Israel has ruled over millions of Palestinians in the occupied territories by military decree, granting them no political rights while relentlessly colonizing their land. Forty-five years on, Israel’s occupation and settlement enterprise become more entrenched by the day, leading many observers to conclude that the creation of a sovereign and territorially contiguous Palestinian state alongside Israel (i.e. the two-state solution) is no longer possible.

The following fact sheet provides an overview of 45 years of Israel's occupation and settlement enterprise.

Almost immediately after the 1967 War ended, Israel began to colonize the occupied territories in violation of international law, with Jewish-only “settlements.” The settlement enterprise was established with the purpose of creating irreversible “facts on the ground,” thereby solidifying Israeli control over the occupied territories and ensuring that under any future diplomatic agreement Israel would retain possession of vast and strategically important tracts of Palestinian territory.

The settlement enterprise was also intended to ensure that a genuinely sovereign Palestinian state would never emerge in the occupied territories. In the words of Henry Siegman, Executive Director of the American Jewish Congress from 1978 to 1994 and former Senior Fellow at the Council on Foreign Relations:

A vivid recollection from the time I headed the American Jewish Congress is a helicopter trip over the West Bank on which I was taken by Ariel Sharon [the former Israeli prime minister and defense minister and godfather of Israel’s settlement enterprise]. With large, worn maps in hand, he pointed out to me strategic locations of present and future settlements on east-west and north-south axes that, Sharon assured me, would rule out a future Palestinian state.

In 2011, respected Israeli human rights organization B’Tselem noted: “The extreme change that Israel has made in the map of the West Bank prevents any real possibility to establish an independent, viable Palestinian state in the framework of exercising the right to self-determination.”

The 'Judaization' of East Jerusalem

Denial of Freedom of Worship

In June 2002, under the pretext of security, the Israeli government began unilaterally constructing a wall, much of it on Palestinian land inside the occupied West Bank. (Since 1994, the Gaza Strip has been surrounded by an Israeli wall that cuts off the 1.6 million Palestinians living there from the rest of the world. See section on Gaza restrictions.)

According to international law, including Article 55 of the Hague Regulations, an occupying power is prohibited from using an occupied territory's natural resources for its own benefit. An occupying power may only use resources in an occupied territory for military necessity or for the benefit of the occupied population. Thus, Israel’s exploitation of Palestinian resources such as water for use in Jewish settlements and inside Israel proper is a clear breach of international law, a position supported by human rights organizations such as Amnesty International.

Despite this clear prohibition, in December 2011, in response to a petition filed by Israeli human rights organization Yesh Din, the Israeli Supreme Court ruled that Israeli companies could continue exploiting Palestinian resources in the occupied territories.

In the Gaza Strip, 90 to 95 per cent of the water from its only water resource, the Coastal Aquifer, is contaminated and unfit for human consumption. Yet, Israel does not allow the transfer of water from the Mountain Aquifer in the West Bank to Gaza.

Stringent restrictions imposed in recent years by Israel on the entry into Gaza of material and equipment necessary for the development and repair of infrastructure have caused further deterioration of the water and sanitation situation in Gaza, which has reached [a] crisis point.

According to Amnesty International, Palestinians received on average of 18.5 gallons of water per person per day, falling short of the World Health Organization’s standard of 26.5 gallons per person per day, the minimum daily amount required to maintain basic hygiene standards and food security.

Between January and July, according to the UN, the Israeli military destroyed 20 water cisterns, some of which were funded by donor countries for humanitarian purposes.

Palestinian residents reported that water supplies were intermittent, and settlers and their security guards denied Palestinians, including shepherds and farmers, access to the springs.

IS ISRAEL AN APARTHEID STATE?

If I'm Jerusalem and I put 500 Jewish settlers out here to the [occupied] east and there's 10,000 Arab settlers in here, if we draw the border to include them, either it ceases to be a Jewish state or you say the Arabs don't get to vote - apartheid. That didn't work too well the last time I saw that practiced in a country.

Although the ultimate origins of the 1967 War lie in Israel’s creation in 1948 and the attendant expulsion of the majority of the non-Jewish, Palestinian-Arab population of the approximately 78% of historic Palestine that became Israel, its immediate causes involved growing tensions between Israel and Egypt in the months prior to June 1967.

Seeking to put pressure on Israel, Egyptian President Gamal Abdel Nasser took a series of steps including asking the UN to withdraw its peacekeeping force from the Sinai Peninsula and moving Egyptian soldiers into their places along the border with Israel, and most importantly, closing the Straits of Tiran to Israeli shipping, which was considered a casus belli by Israel.

Despite his saber rattling, behind the scenes Nasser was sending diplomatic signals to the US and Israel indicating that he wanted to resolve the crisis through negotiations. Much of the Egyptian army was bogged down in Yemen, where Egypt had intervened in the civil war, and Nasser was in no position to launch a war against Israel. On June 2, US Secretary of State Dean Rusk relayed to Israeli Ambassador Avraham Harman that the US had “been told categorically that Egypt will not attack.”

Knowing that Nasser was likely bluffing, and sensing an opportunity to eliminate much of his Soviet-supplied armed forces and expand territorially, on the morning of June 5 Israel launched a devastating air assault on the Egyptian air force, most of which was destroyed on the ground in a few hours. Syria and Jordan came to Egypt's defense, and were swiftly defeated as well.

Over the course of the next six days, Israel conquered and militarily occupied the Palestinian West Bank, East Jerusalem (both controlled by Jordan post-1948), and Gaza Strip (controlled by Egypt post-1948), the Syrian Golan Heights, and the Egyptian Sinai Peninsula (the latter was returned as part of the 1979 peace agreement between Israel and Egypt). In doing so, Israel came to control the remaining 22% of historic Palestine.

Israel's rapid victory stunned the international public, despite the fact that Israeli and US intelligence had both predicted an easy Israeli victory, even in a battle waged on multiple fronts. Israel’s UN envoy, Abba Eban, initially claimed to the UN Security Council that Egyptian troops had attacked first and that Israel's air strikes were retaliatory. Within a month, however, Israel admitted that it had launched the first strike. It asserted that it had faced an impending attack by Egypt, evidenced by Egypt's bellicose rhetoric, removal of UN peacekeeping troops from the Sinai Peninsula, closure of the Straits of Tiran to Israeli shipping, and concentration of troops along Israel's borders.

Later, Israeli political and military leaders acknowledged that they knew Israel wasn’t in imminent danger of an Egyptian attack. Yitzhak Rabin, future prime minister and chief of the General Staff of the Israeli army during the war, said in a 1968 interview:

I do not believe that Nasser wanted war. The two divisions he sent into Sinai on May 14 would not have been enough to unleash an offensive against Israel. He knew it and we knew it.

General Matityahu Peled, a member of the General Staff during the war, later said:

The thesis according to which the danger of genocide weighed on us in June 1967, and that Israel struggled for its physical existence is only a bluff born and developed after the war.

Our General Staff...never told the government that the Egyptian military threat represented any danger to Israel.

Fifteen years after the war, in 1982, then-Prime Minister Menachem Begin said in a speech:

In June 1967 we again had a choice. The Egyptian army concentrations in the Sinai approaches do not prove that Nasser was really about to attack us. We must be honest with ourselves. We decided to attack him... [The government decided to] take the initiative and attack the enemy, drive him back, and thus assure the security of Israel and the future of the nation.

Israel’s victory was a watershed moment in the history of the modern Middle East and in the Arab-Israeli conflict, with widespread repercussions that continue to reverberate today.

As a result of the Arab defeat, Palestinians stopped looking to Arab states like Egypt to redress the wrongs done to them during Israel’s creation nearly two decades earlier. In 1969, Yasser Arafat and his Fatah party took control of the Palestine Liberation Organization (PLO), which had been created by the Arab League in 1964 to manage and contain the growing Palestinian national movement spreading across the Arab world. In the process, the PLO was transformed into an independent umbrella organization representing a cross section of Palestinian political parties, attracting the support of Palestinians around the world. In 1974, the PLO was formally recognized by the UN as the “sole legitimate representative” of the Palestinian people.

Amongst the Israeli public, raised on a steady stream of propaganda portraying Israel as constantly facing annihilation at the hands of hordes of Arabs and Muslims, the war was widely seen as a miraculous triumph. However, it proved a Pyrrhic victory. For with the conquest of the occupied territories came the beginnings of the settlement movement that, 45 years later, has made the creation of an independent Palestinian state alongside Israel all but impossible. As they realize that the facts Israel continues to create on the ground in the West Bank and East Jerusalem preclude a sovereign Palestinian state ever emerging there, more and more Palestinians are demanding civil rights within one, secular, democratic state comprising Israel and the occupied territories – the so-called “one state solution.”

Map of Settlements Around Jerusalem (March 2010)

Palestinian Academic Society for the Study of International Affairs:

The Near East after the June 1967 June War

Jerusalem and its Environs (interactive)