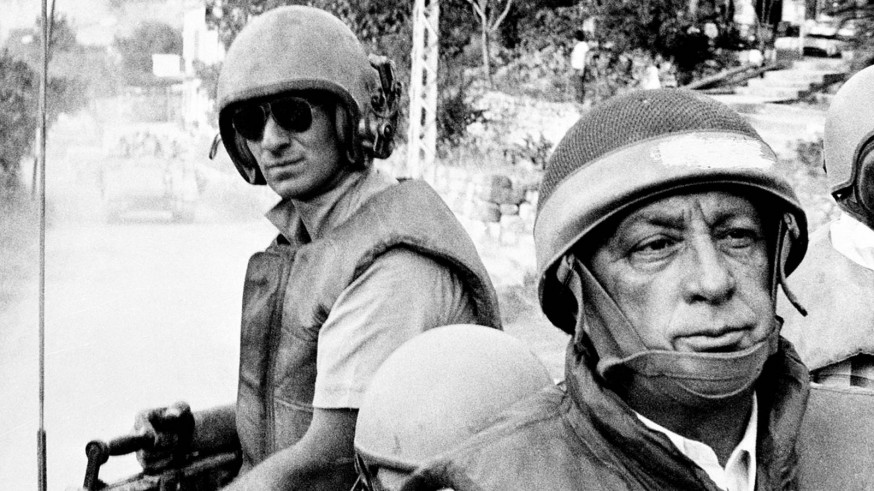 PHOTO: In this June 15, 1982 file picture, Israeli Defence Minister Ariel Sharon, foreground, rides an armored personnel carrier on a tour of Israeli units advancing to the outskirts of Beirut, Lebanon. (THE ASSOCIATED PRESS)

During more than a half century in the Israeli military and politics, Ariel Sharon became a figure reviled by Palestinians, the Arab world, much of the international community, and even by many Israelis. He was responsible for numerous atrocities and war crimes, including the killing of tens of thousands of Palestinian, Lebanese, and other civilians, destroying thousands of Palestinian homes, and the theft and colonization of massive amounts of occupied Palestinian land. Although some revisionists and Sharon supporters claim that he had turned over a new leaf and was prepared to make painful concessions towards peace with the Palestinians prior to suffering a massive stroke and falling into a coma in January 2006, the facts lead to a very different conclusion.

The following fact sheet provides an overview of Sharon’s war crimes and crimes against humanity, which continue to have a devastating impact on both the victims of his actions and the chances for peace between Israelis and Palestinians.

GODFATHER OF SETTLEMENT MOVEMENT & CREATOR OF BANSTUSTANS (1970s TO 2006)

“I have been in urban environments where house to house fighting has happened: Rwanda, Nicaragua, El Salvador, Colombia, and a city struck by a massive earthquake: Mexico City. The devastation seen in Jenin camp had the worst elements of both situations. Houses not just bulldozed or dynamited but reduced almost to dust by the repeated and deliberate coming and goings of bulldozers and tanks. Houses pierced from wall to wall by tank or helicopter gun ships. Houses cut down the middle as if by giant scissors. Inside, an eerie vision of dining or bedrooms almost intact. No signs whatsoever that that bedroom or dining room or indeed the house had been used by fighters. Gratuitous, wanton, unnecessary destruction.”

PUTTING THE PEACE PROCESS IN “FORMALDEHYDE”: THE GAZA DISENGAGEMENT (2005)