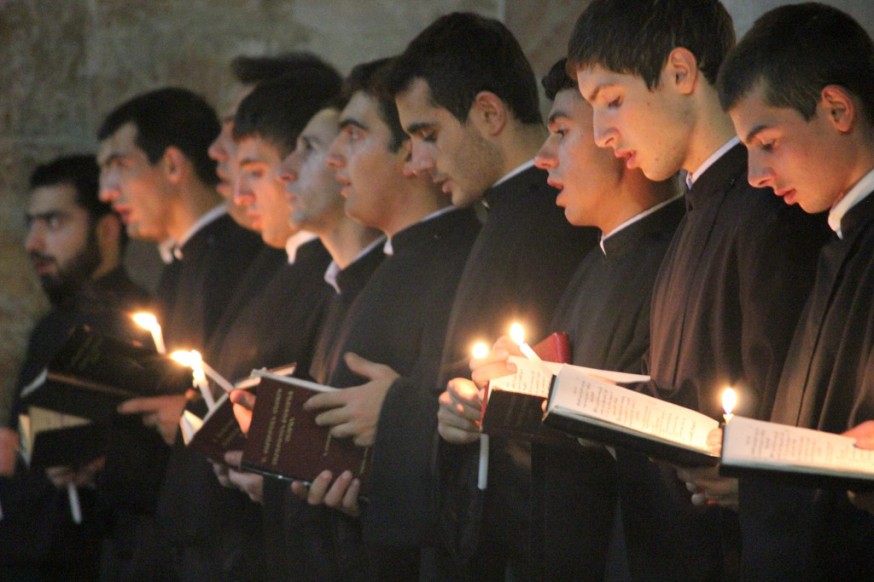 A recent "60 Minutes" report on the US television network CBS highlighted the plight of Palestinian Christians, whose roots in the Holy Land are as deep as those of Christianity itself. That sacred tradition is under threat, though, as the Christian population continues to dwindle in Palestinian territories occupied by Israel. Within Israel, too, historically Christian enclaves suffer from underdevelopment, poverty, and discrimination from an Israeli state that privileges Jews over non-Jews.

Who are Palestine's Christians? What sparked the Christian exodus from the Holy Land? And how are those who remain faring today? This IMEU fact sheet explores these and other questions through the eyes of Christians themselves.

Who are Palestine's Christians?

Historical Palestine -- including modern-day Israel, the West Bank, and Gaza -- has had a continuous Christian presence since the time of Jesus. Today, that territory is home to just over 200,000 Christians, with roughly 75 percent of these living in Israel, and the remaining 25 percent living in the West Bank and Gaza. About half of Palestinian Christians belong to the Greek Orthodox Church while Catholics, the second-largest denomination, account for the majority of remaining Christians.

Concentrated in Bethlehem and East Jerusalem, West Bank Christians comprise roughly two percent of the population there, while Gaza's estimated 3,000 Christians account for less than one percent. The latter number has held steady in recent years, while the number of Christians in the West Bank has continued to dwindle -- by some estimates, from roughly 15 percent of the total Palestinian population prior to the creation of the State of Israel in 1948. In Israel, some 150,000 Christians remain, but these numbers do not tell the whole story: Following Israel's creation in 1948, fully 35 percent of the Christian population were prevented from returning to their homes in historical Palestine (more on this below).

Hailing from all walks of life, Palestinian Christians include major religious leaders like Munib Younan, president of the Lutheran World Federation since 2010 and the Bishop of the Evangelical Lutheran Church of Jerusalem; Archbishop Theodosios (Hanna) of Sebastia, Bishop of the Orthodox Patriarchate of Jerusalem; as well as Michel Sabbah and Fouad Twal, the former and current Latin Patriarchs of Jerusalem, respectively. Major political figures, including Ramallah mayor Janet Mikhail and Bethlehem mayor Victor Batarseh, are also Christian.

What sparked the Christian exodus from the Holy Land?

The Christian "exodus" from the Holy Land can be traced to 1948, when more than 750,000 Palestinians were forced from their homes by the creation of the State of Israel. With hundreds of Palestinian villages destroyed and at least half of the indigenous population displaced to refugee camps internally or in neighboring countries, Christians and Muslims -- whose roots in the Holy Land stretched back for centuries -- suffered the same fate. That Israel bore responsibility for this Palestinian nakba, or "catastrophe," was affirmed by the Israeli historian Benny Morris in a 1986 paper for the journal Middle Eastern Studies. In fact, Morris traces the Palestinian exodus to before 1948, when Jewish terrorist groups systematically harassed and expelled tens of thousands of indigenous Arabs. Morris cites a June 30, 1948 "military intelligence" report from the Haganah, which boasted that "[a]t least 55% of the total of the exodus was caused by our (Haganah/IDF) operations." Morris continues:

"To this figure, the report's compilers add the operations of the Irgun and Lehi, which 'directly (caused) some 15%... of the emigration'. A further 2% was attributed to explicit expulsion orders issued by Israeli troops, and 1% to their psychological warfare. This leads to a figure of 73% for departures caused directly by the Israelis. In addition, the report attributes 22% of the departures to 'fears' and 'a crisis of confidence' affecting the Palestinian population. As for Arab calls for flight, these were reckoned to be significant in only 5% of cases..."

Conveniently, the Israeli Central Bureau of Statistics offers no breakdown of religious groups for 1948, the year Israel was created. Still, a recent report shows that some Palestinian population centers saw their Christian population virtually gutted; Haifa, for example, lost 85 percent of its Christian residents in 1948. And in any case, no historian, Israeli or otherwise, disputes that Zionist forces unleashed equal brutality on all of Palestine's Arabs. As such, the modern Christian exodus from the Holy Land began with the creation of the State of Israel.

How are those who remained faring today? Despite its record of displacing massive numbers of Christians in 1948, Israel, say its officials, has since become the "only democracy in the Middle East" and a safe-haven for Christians. Yet while some 20 percent of Israel's Christian population includes non-Arab immigrants, most of them spouses of Israeli Jews, the remaining 80 percent is Palestinian -- a fact that betrays ongoing Israeli discrimination against most Christians governed by the state. Like all indigenous Palestinian citizens of Israel, these Christians are subject to more than 35 laws explicitly privileging Jews over non-Jews. Among these is a recently proposed oath requiring all Israel's citizens, including more than 1.5 million Christian and Muslim Palestinians, to swear allegiance to a "Jewish and democratic" Israel. This overt discrimination rears its head in other ways, too: As Columbia University Professor Rashid Khalidi has pointed out, not one of the 137 locations covered under Israel's Protection of Holy Sites Law is either Christian or Muslim.

The situation of Christians in the West Bank and Gaza, territories held under a brutal Israeli military occupation since 1967, is even more stark. Due to Israel's Apartheid wall and its dizzying system of checkpoints and permits, no Palestinian resident of the West Bank or Gaza, Christian or otherwise, enjoys freedom of worship at Jerusalem's holy sites. That freedom can only be granted by Israel, which, in contravention of international law, has unilaterally claimed complete control of East Jerusalem, extending its municipal boundaries to expropriate thousands of Palestinian homes and systematically withdrawing their inhabitants' right of residency. And for those Palestinians who have managed to maintain residency within these forcibly drawn boundaries, Israel has launched a brazen campaign of evictions and home demolitions to make room for illegal Jewish-only settlements and other state projects.

In other areas of the West Bank, Christians suffer from the same movement restrictions applied to all Palestinians under Israeli occupation. Getting from Ramallah to Bethlehem, for example, used to take 20 minutes by car. Today, Israel has claimed that route as an Israeli-only road allowing Israeli settlers to "bypass" Palestinians on their way to illegal settlements. As a result, Palestinians are forced to use the treacherous Wadi Nar -- or "Valley of Fire" -- road, which itself is subject to closure at the Israeli military's whim. A familiar struggle for Palestinians throughout the West Bank, the restrictions into Bethlehem take on added significance for Christians, whose access to holy sites there, among them the Church of the Nativity, is frequently denied by Israel.

Gaza's Christians, though they are a tiny minority, have remained a constant presence, even after Hamas took control of internally governing the territory in 2007. Israel maintains a complete stranglehold on Gaza's air, sea, and land borders, which has effectively imprisoned all approximately 1.6 million Palestinians there. That most of these residents are themselves refugees or descendants of refugees from 1948 adds insult to the injury of Israel's ongoing occupation. What's more, the United Nations estimates that Israel's blockade has left roughly 80 percent of Gaza's population dependent on food aid to survive. Like their compatriots in the West Bank, none of Gaza's residents, Christian or Muslim, can travel to holy sites outside of their walled enclave without permission from the Israeli military. Worse, even medical treatment has been routinely denied, including in the wake of Israel's two-week bombing campaign in December 2008 and January 2009, which killed more than an estimated 1,300 Palestinians, approximately a quarter of them women and children.

All told, Christians -- like all Palestinians -- in the West Bank and Gaza continue to be harmed by the Israeli occupation, as it systematically aims to restrict their freedoms, making exodus for some inevitable. And though many of them remain, Palestinian Christian citizens of Israel continue to suffer from discriminatory laws that privilege Jews over non-Jews.