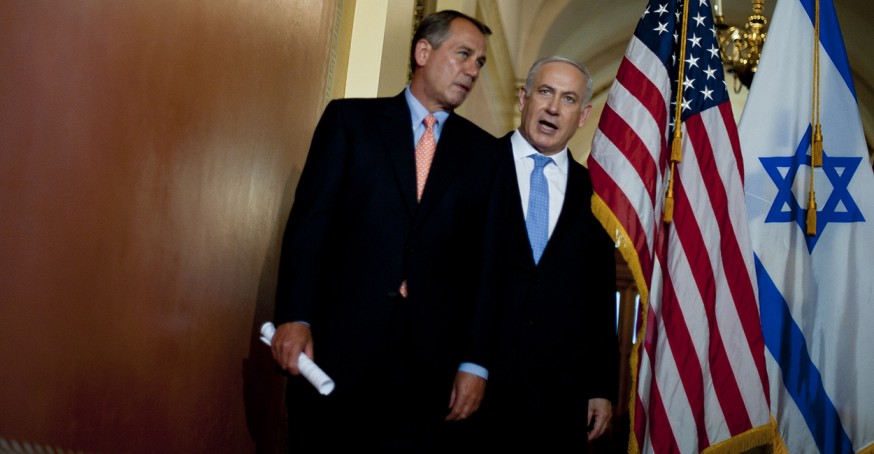 PHOTO: Benjamin Netanyahu and Speaker of the House John Boehner in 2011. (Newscom/Pete Marovich)

For further reference on Netanyahu's address to Congress, see also our Q&A with expert Shibley Telhami on diminishing support for Israel among key US demographics.

Trita Parsi, Founder and president of the National Iranian American Council (NIAC), and author of A Single Roll of the Dice: Obama's Diplomacy with Iran (2012) and Treacherous Alliance: The Secret Dealings of Israel, Iran, and the United States (2007).

Q - According to reports, Israeli Prime Minister Benjamin Netanyahu is unhappy with President Obama's approach to negotiations with Iran over its nuclear program and will use his speech to Congress on Tuesday (March 3) to pressure the US into taking a harder line. How would you assess President Obama's Iran policy so far?

TP - “President Obama made an initial attempt at diplomacy in 2009, which he quickly abandoned since it did not yield immediate results. Then he turned his focus to sanctions. Extremely strong sanctions were imposed on Iran, but the sanctions pressure did not stop Iran's nuclear activities. In fact, Iran responded to sanctions by aggressively expanding its nuclear program. This created an escalatory spiral that eventually would have led to war. The Obama administration realized this, and was looking for an exit. When Presidenti Rouhani was elected in 2013, that exit was provided. That's when diplomacy started in earnest. Once the two sides became convinced of the other side's sincerity, the political will and commitment they showed to diplomacy was unprecedented. That is why they are today on the brink of an historic agreement.”


Q - Netanyahu, who has been warning that Iran is on the verge of acquiring nuclear weapons for more than twenty years, claims that a nuclear-armed Iran would pose a grave threat to Israel's very survival. If it gets the bomb, would Iran pose an existential threat to Israel, which has a large, undeclared arsenal of nuclear weapons of its own?

TP - “Iran is not an existential threat to Israel. And many senior officials in the Israeli government are quite open and public about that fact. Iran is a challenge for Israel, and even a threat, but not an existential threat. In fact, If you scratch the surface, you will see that the behavior of Israel vis-à-vis Iran shows that it does not view Iran as an existential threat. For instance, a senior advisor to Ariel Sharon told me that Iran would not attack Israel because whatever Iran would do to destroy Israel, it could not destroy Israel's ability to destroy Iran in turn. The reason is because Israel has a second-strike capability as a result of its nuclear weapons-equipped, German-made dolphin submarines. Tehran of course knows this and their past behavior has shown that they are very calculating and cautious about escalating matters.

“What is really at stake for Israel is that it fears that any deal between the United States and Iran would lock in a shift in the regional balance of power that is to Israel's disfavor. And that it will lose the United States as a highly committed ally in containing and confronting Iran as part of Israel's geopolitical rivalry with Iran.”