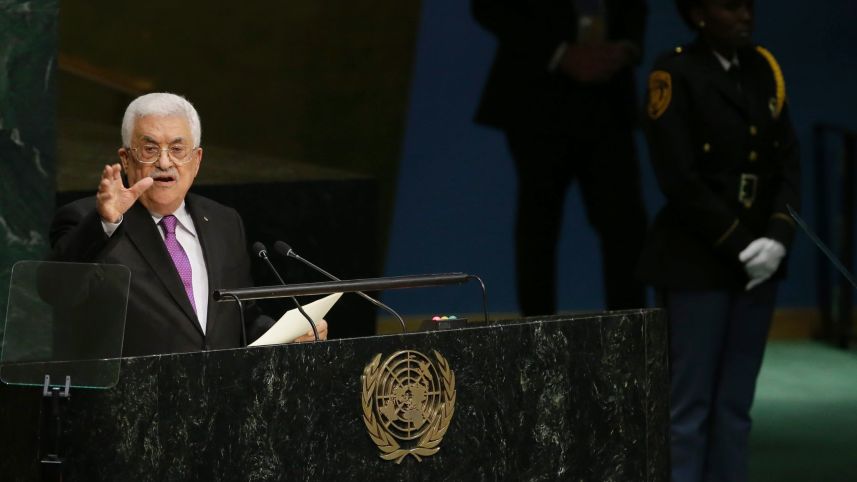 Q - During his speech to the UNGA today, Palestine Liberation Organization Chairman and Palestinian Authority President Mahmoud Abbas said that the Palestinians will no longer abide by the terms of Oslo Accords if Israel continues to systematically violate them. What, if any, significance do you think this will have in practical terms?

“In stating that he is no longer bound by the Oslo Accords, Abbas presents a false parity between the Palestinian Authority and Israel. The Oslo Accords did not create two equal parties but instead entrenched a system of apartheid, divided Palestinian territory and imposed mass restrictions on Palestinian movement, while simultaneously allowing for Israeli settlement activity to continue. Abbas’s statement, therefore, will mean little in practical terms, unless or until he disbands the PA, stops cooperating with the Israeli army, abandons the two-state framework, and/or pushes for Israel’s international isolation.

“As it currently stands, the only remaining vestiges of the Oslo Accords are the Palestinian Authority itself and its provisions that keep Palestinians trapped in heavily policed bantustans. The other elements of Oslo, namely direct negotiations with Israel, were undone by Israel years ago.  While Abbas says he’s no longer bound by Oslo, on the ground nothing will change. Palestinians will remain under Israel’s brutal 47-year-old military rule, which becomes more entrenched with each passing day.”

Q - Why do you think Abbas is doing this now?

DB - "Abbas is doing this now because there has been growing criticism of his rule and his failure to bring Palestinians any closer to their freedom after ten years in power. It also a result of the ongoing insecurity that Palestinians feel stemming from Israel’s nearly half-century-old occupation, including the systematic theft of their land and destruction of their homes.

"The latest wave of settler attacks, including the murder by arson of three members of the Dawabsheh family that has so far gone unpunished by Israel’s military, has increased pressure on Abbas to do something to change the deteriorating status quo. As the occupation deepens and Israeli attacks against them continue, Palestinians are also increasingly asking why PA police are working to protect Israel while Israeli settlers and trigger-happy soldiers run rampant throughout the occupied territories, attacking and terrorizing Palestinians with virtual impunity.

"Additionally, Abbas has failed to reconcile the crippling political divisions between Hamas and his Fatah party during his decade-long rule, or to press for the desperately needed reconstruction of Gaza following Israel’s numerous military assaults. While failing to take effective action to hold Israel accountable for its human rights abuses and violations of international law, Abbas has worked to quash dissent within the PLO and within Fatah. With such undemocratic rule and no prospects for a better future, Abbas feels he needs to do something to shore up rapidly diminishing support."

Q - Many Palestinians want the Oslo Accords to be canceled. Why is this the case?

DB - "The US-sponsored Oslo Accords have been an unmitigated disaster for Palestinians. Instead of leading to Palestinian freedom, the Oslo process entrenched Palestinian dependence on Israel economically, while giving Israel cover to deepen its occupation and settlement enterprise without suffering international censure for its violations of international law and human rights abuses.

"Since the signing of the first of the Oslo Accords in 1993, the number of Israeli settlers living illegally on occupied Palestinian land has nearly tripled, to 650,000, and the occupied territories have been systematically carved up into easily controlled bantustans. Oslo has entrenched a system of apartheid whereby Palestinians and Israelis are subjected to two different, and unequal, systems of laws living on the same territory. Due to the Oslo Accords, Palestinians and their economy have remained hostage to Israel. The Paris Protocol, the framework that governs economic relations between Israel and the PA and was supposed to be temporary like the rest of the Oslo Accords, had the effect of making permanent Israel’s domination of the Palestinian economy through provisions like the stipulation that Israel collects tax revenues on behalf of the PA. In this light, it is not surprising that support for Oslo has steadily declined over the years."

Q - What would/will happen if the PA is dissolved and Oslo is annulled?

DB - "The PA will not be dissolved anytime soon. It is in the interests of both Israel and the international community for the PA to remain intact, and many Palestinians rely on it financially. The PA provides the international community with the ability to channel funds directly to (select) Palestinians, while allowing Israel to subcontract enforcement of the occupation, as well as responsibility for the well being of the Palestinian population, which legally Israel remains responsible for as the occupying power. Israel also maintains leverage over Palestinians in the occupied territories by controlling the transfer of tax money that the PA relies on.

"In other words, the PA serves to keep Palestinians subservient to the demands of Israel and the donor community. As a result, Israel and the international community, including the U.S., will continue to keep the PA afloat, at least in the near term."

Q - What alternatives are there to the Oslo negotiations model?

DB - "For Palestinians, the alternative to the failed Oslo negotiations model is a broad-based nonviolent popular struggle for equal rights featuring three main components. The first is the boycott, divestment and sanctions (BDS) movement, which has broad support in Palestine and has made significant progress in countries around the world in the decade since it began, including the U.S. Inspired by the U.S. Civil Rights movement and the struggle against apartheid in South Africa, BDS aims to realize Palestinian freedom and rights using nonviolent means including economic pressure. The second component is to press for Israel to be held accountable for it violations of international law and human rights abuses in international forums like the International Criminal Court. The third component is popular, unarmed resistance, as practiced regularly in a number of West Bank towns in recent years.

"Combined, these three forms of action stand a far better chance of leading to Palestinian freedom than continuing to engage in bilateral, or even multilateral, negotiations towards a two-state solution that died years ago and that was never really desirable from the point of view of realizing Palestinian rights to begin with. Even if a Palestinian state were to be created in the occupied territories, Palestinian citizens of Israel, about 20% of the population, would remain second-class citizens in their own homeland, while a majority of Palestinian refugees would be denied their internationally recognized legal right to return to lands they were expelled from during Israel’s creation and subsequently. In short, the two-state solution was never really a solution at all for most Palestinians."

Q - What do you think the United States should do?

DB - "The U.S. should begin by conditioning the billions of dollars in military aid that is sent annually to Israel on respect for U.S. and international law, both of which Israel routinely flouts. If Israel refuses, the U.S. should cut off aid.

"By continuing to grant Israel special status and massive unconditional support, the U.S. encourages Israeli leaders in their destructive behavior - which no fewer than three Israeli prime ministers warned would turn Israel into an “apartheid” state - and sends the message to Palestinians and people around the world that the U.S. supports Israel’s brutal and discriminatory treatment of Palestinians.

"The U.S. should also abandon the delusional notion that a people living under the military rule of a much stronger foreign power can and should negotiate their freedom with their occupier. Instead, the U.S. should press for the international community to finally begin to hold Israel accountable for it actions, and it should support rather than obstruct Palestinian efforts to achieve their freedom peacefully using BDS, the ICC, and other means."