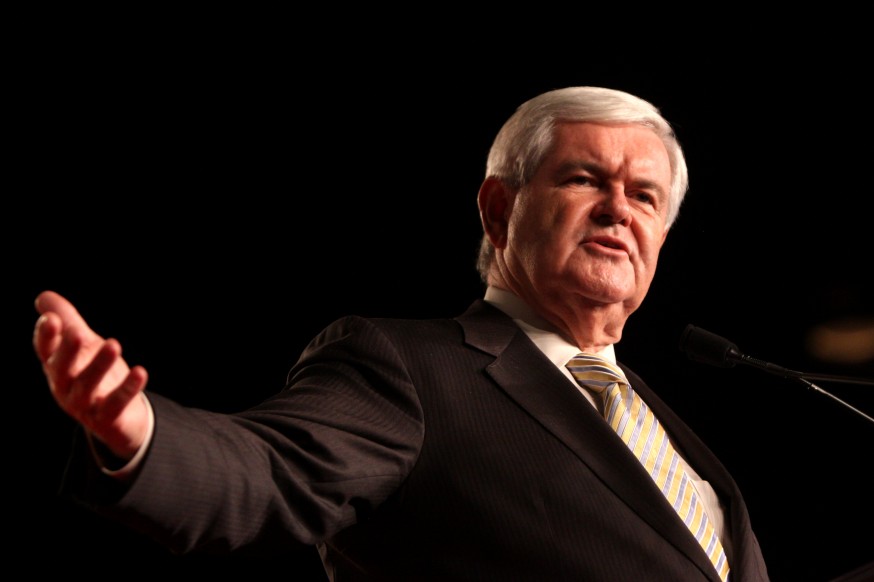 Once again, the subject of Palestine and the Palestinians took center stage at the Republican presidential debate in Florida last night. In response to a question from a Palestinian-American Republican in the audience, Mitt Romney and Newt Gingrich made a number of false and defamatory assertions about Palestinians and the Israeli-Palestinian conflict. The following is a fact check of their statements.

1. Palestinians bear complete blame for the lack of peace

The claim: "The reason that there is not peace between the Palestinians and Israel is because, in the leadership of the Palestinian people are Hamas and others who think like Hamas, who have as their intent the elimination of Israel."

The facts: For more than 63 years, Israel has been dispossessing Palestinians and expelling them from their land and homes in order to create and maintain a Jewish majority in a part of the world where they are a demographic minority. This is the root cause of the entire conflict.

This process has never stopped or paused, even during the seven-year period that Israelis and Palestinians were negotiating the Oslo Accords, during which time Israel more than doubled the number of Jewish settlers living illegally on occupied Palestinian land to more than half a million.

Israel's settlement enterprise, which began long before Hamas was created in the late 1980s, is the single biggest obstacle to the realization of the internationally approved two-state resolution to the conflict. Yet, with the exception of a partial 10-month slowdown, Israel has consistently refused to stop building Jewish-only colonies on occupied Palestinian land, even under enormous pressure from the United States and the international community, leading more and more observers to conclude that the two-state solution is dead.

The claim: "there is a belief that the Jewish people do not have a right to have a Jewish state."

The facts: Recognizing Israel as a Jewish state would mean acquiescing in the permanent second-class status of Palestinian citizens of Israel, who make up approximately 20 percent of the population. Recognizing Israel as a Jewish state would also mean renouncing at the outset of negotiations the internationally recognized right of Palestinian refugees to return to the land and homes that they were expelled from during Israel's creation. Asking Palestinians to recognize Israel as a "Jewish state" is akin to asking American Jews and other non-Christians to officially recognize the United States as a "Christian state."

The claim: "the Israelis would be happy to have a two-state solution. It's the Palestinians who don't want a two-state solution. They want to eliminate the state of Israel." The facts: In 1988, the PLO recognized the state of Israel. This was considered a major and historic compromise on the part of the Palestinians, who effectively renounced their claim to 78 percent of historic Palestine. (See map here.) In 1993, the PLO and the government of Israel exchanged official letters in which the Palestinians formally recognized "the right of the State of Israel to exist in peace and security," while in return Israel acknowledged the PLO as the legitimate representative of the Palestinian people. It's widely recognized that the most significant obstacle to the creation of a Palestinian state in the occupied territories (and hence to the two-state solution) is Israel's settlement enterprise, which has continued to expand day after day, month after month, year after year, regardless of whether negotiations are taking place or not. 4. Obama castigated Israel at the UN while ignoring Palestinian rocket fire

The claim: Obama "went before the UN and castigated Israel for building settlements," and "said nothing about thousands of rockets being rained in on Israel from the Gaza Strip..."

The facts: It's not clear what exactly Romney was referring to with this comment, but during President Obama's address to the United Nations General Assembly in September 2011, Obama spoke out forcefully in support of Israel and heavily criticized the Palestinian statehood bid put forward by PLO Chairman Mahmoud Abbas. He made no mention of Israeli settlements, but did go out of his way to condemn Palestinian violence, stating:

Israel is surrounded by neighbors that have waged repeated wars against it. Israel's citizens have been killed by rockets fired at their houses and suicide bombs on their buses. Israel's children come of age knowing that throughout the region, other children are taught to hate them. Israel, a small country of less than eight million people, look out at a world where leaders of much larger nations threaten to wipe it off of the map. The Jewish people carry the burden of centuries of exile and persecution, and fresh memories of knowing that six million people were killed simply because of who they are. Those are facts. They cannot be denied.

According to public opinion polls, Obama's popularity amongst Israeli Jews increased considerably following his speech. In reality, the Obama administration has gone to extraordinary lengths to demonstrate its support for Israel, including vetoing a UN Security Council resolution in February 2011 condemning settlement activity that enjoyed the support of the other 14 members of the Security Council. This despite the fact that official US policy since 1967 regards Israeli settlement activity as illegal and counterproductive to peace efforts.

The claim: Obama "threw Israel under the bus with regards to defining the '67 borders as the starting point of negotiations."

The facts: In a speech on May 19, 2011, Obama said, "We believe the borders of Israel and Palestine should be based on the 1967 lines with mutually agreed swaps, so that secure and recognized borders are established for both states." Three days later, in his address at the annual conference of Israel lobby group AIPAC, Obama clarified what he meant by "mutually agreed swaps," stating: "By definition, it means that the parties themselves - Israelis and Palestinians - will negotiate a border that is different than the one that existed on June 4, 1967. That's what mutually agreed-upon swaps means. It is a well-known formula to all who have worked on this issue for a generation." Obama's formal statement endorsing 1967 borders is not a policy shift. The Israelis themselves explicitly agreed to 1967 borders with modifications as the basis of negotiations in the 2001 Taba talks. And the 1967 borders have been the assumed basis of discussions ever since the Oslo process began in 1993. Moreover, in November 2010, Israeli Prime Minister Benjamin Netanyahu and Secretary of State Hillary Clinton released a joint statement that read:

The Prime Minister and the Secretary agreed on the importance of continuing direct negotiations to achieve our goals. The Secretary reiterated that "the United States believes that through good-faith negotiations, the parties can mutually agree on an outcome which ends the conflict and reconciles the Palestinian goal of an independent and viable state, based on the 1967 lines, with agreed swaps..."

Netanyahu would later complain bitterly in public about being forced to accept the "indefensible" pre-1967 borders, a move many considered little more than a political ploy to garner domestic support.

1. Gingrich repeats claim that Palestinians are an "invented" people, adding that they were invented in the "late 1970s."

The claim: Palestinians are "an invention of the late 1970s... prior to that they were Arabs. Many of them were either Syrian, Lebanese, or Egyptian, or Jordanian."

The facts: The idea that Palestinians (or Palestinian nationalism) were "invented" in the "late 1970s" is patently and demonstrably absurd. While the land historically known as Palestine was ruled for centuries by the Ottoman Empire, the Palestinians are no more an "invented" nation than Israel or the United States. Like other peoples recognized as a national group, Palestinians have a distinct history, culture, dialect, institutions, and traditions. It's not clear what Gingrich meant in referring to the "late 1970s," but by then the Palestinian national movement was well-developed and recognized the world over - and had been for many years. Interestingly, Gingrich used to have a very different view of Palestinians. In 2005, he wrote an article calling Palestinians "among the most international and most advanced people in the Arab world," and urging Palestinians in the "diaspora" to invest in "their ancestral lands." He continued:

The U.S. government should become the protector of the Palestinian people's right to have a decent amount of land... The desire of some Israelis to use security as an excuse to grab more Palestinian land should be blocked by Washington even if that requires employing financial or other leverage to compel the Israeli government to behave reasonably on the issue of settlements. It is vital to our credibility in the entire Middle East that we insist on an end to Israeli expansionism. It is vital to our humanitarian duty to the Palestinian people that we protect the weaker party from the stronger power. It is vital that the world sees that our total support for Israeli security is not matched by a one-sided support for more extreme Israeli territorial demands.

2. Gingrich claims Palestinians can achieve their freedom any time they want

The claim: Palestinians can achieve freedom and self-determination "any morning they are prepared to say, 'Israel has a right to exist, we give up the right to return, and we recognize that we're going to live side by side, now let's work together to create mutual prosperity... But the political leadership would never tolerate that.'"

The facts: As highlighted above, in 1988 the PLO recognized the state of Israel. This was considered a major and historic compromise on the part of the Palestinians, who effectively renounced claim to 78 percent of historic Palestine. (See map here.) Furthermore, in 1993 the PLO and the government of Israel exchanged official letters in which the Palestinians formally recognized "the right of the State of Israel to exist in peace and security." For almost 20 years, since the start of the Oslo process in 1993, Palestinian leaders have attempted to negotiate a comprehensive peace agreement with Israel leading to the creation of an independent Palestinian state in the occupied West Bank, East Jerusalem, and Gaza, living "side by side" in peace with Israel. Unfortunately, because of Israel's refusal to end its relentless expansion of Jewish-only settlements on Palestinian land in the West Bank and East Jerusalem, many experts now believe that the two-state solution is beyond realization (see map of West Bank here). Because the right of Palestinian refugees to return to the lands from which they were expelled by Israel is an individual right enshrined in international law, Palestinian leaders have no legal authority to renounce it. Even if they were to do so, this would not prevent Palestinian individuals and civil society organizations from seeking legal redress to protect their rights. UN Resolution 194, passed following the expulsion of over 700,000 Palestinians during Israel's creation in 1948, states:

[Palestinian] refugees wishing to return to their homes and live at peace with their neighbours should be permitted to do so at the earliest practicable date, and that compensation should be paid for the property of those choosing not to return and for loss of or damage to property which, under principles of international law or in equity, should be made good by the Governments or authorities responsible.