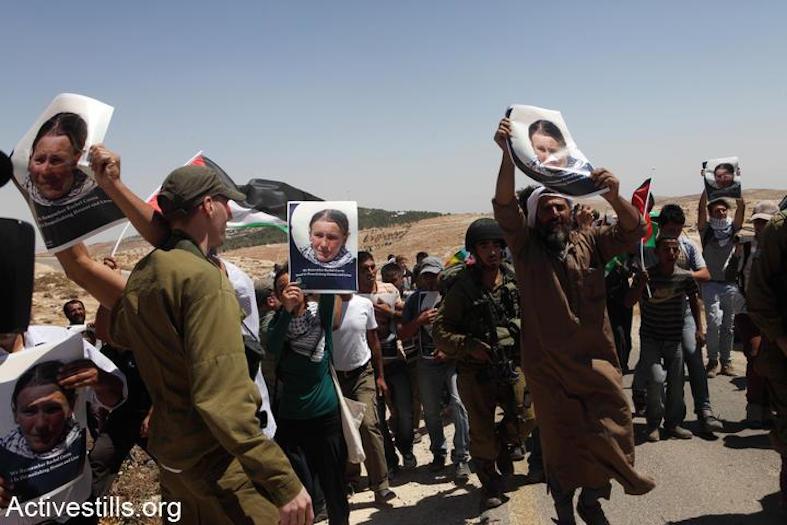 Response of the United States Government

THE CORRIE FAMILY'S SEARCH FOR ACCOUNTABILITY

A few weeks after Rachel is killed, American citizen and ISM volunteer Brian Avery is shot in the face by Israeli soldiers in the city of Jenin in the West Bank. Lucky to survive, Avery undergoes a series of facial reconstruction surgeries and suffers severe facial scarring. After initially refusing to investigate the incident, the Israeli government subsequently agrees to an out-of-court settlement paying Avery $175,000.

Less than a week after Avery is shot in the face and seriously wounded by Israeli soldiers in the West Bank, British ISM member and photographer Tom Hurndall is shot in the head by Israeli soldiers in Gaza while he attempts to help a group of Palestinian children to safety after Israeli soldiers begin shooting in the vicinity. After nearly a year in a coma, Hurndall dies in January 2004. Following pressure from the British government and Hurndall's family, the Israeli army lays charges of manslaughter against a soldier who confesses to the shooting. The soldier is convicted in 2005 and sentenced to eight years in prison, but is released early for good behavior in 2010.

Respected British cameraman James Miller, who had worked for major international news organizations such as CNN, is shot and killed by Israeli troops in Gaza he while carries a white flag.

Oakland native and nonviolent ISM activist Tristan Anderson is shot in the face with a high-velocity tear-gas canister by Israeli forces while participating in a demonstration against a section of the wall Israel is building on land belonging to the town of Ni'lin in the occupied West Bank. Anderson suffers multiple fractures to his skull, a severe injury to the frontal lobe of his brain, and a collapsed eye socket, causing him to lose sight in his right eye. He spends more than a year in an Israeli hospital recovering before returning to the US, where he continues to suffer the effects of his injury.

Turkish and American citizen Furkan Dogan is shot and killed along with eight other Turkish human rights activists by Israeli commandos who storm the boat they're traveling on in international waters as part of the Gaza Freedom Flotilla. Dogan is shot multiple times in his leg, foot, back, and twice to the head. A United Nations investigation concludes that he and five of the other victims have been shot "execution-style" at close range, finding that Furkan has been shot in the face after "lying on the deck in a conscious or semi-conscious, state for some time."

At a demonstration at the Qalandiya checkpoint in the occupied West Bank to protest the attack on the Gaza Freedom Flotilla, 21-year-old American artist and student Emily Henochowicz is hit in the face by a tear gas canister fired by Israeli border police. The force of the impact fractures her jaw and orbital bone and causes the loss of her left eye.

Sixty-year-old American citizen and member of Michigan Peace Team Sandra Quintano suffers two broken wrists and a laceration to her head after being assaulted by Israeli soldiers in the West Bank village of Izbet al-Tabib during a peaceful demonstration against the construction of Israel's wall, which will cut off villagers' access to their land.

Twenty-two-year-old Palestinian-American student Munib Masri is shot in the back with live ammunition by Israeli soldiers along the Lebanon border as he participates in a march to mark the 63rd anniversary of the Nakba, the expulsion of Palestinians from their homes during the establishment of Israel. The bullet destroys Masri's left kidney and spleen and breaks apart in his spine. He remains in a wheelchair.