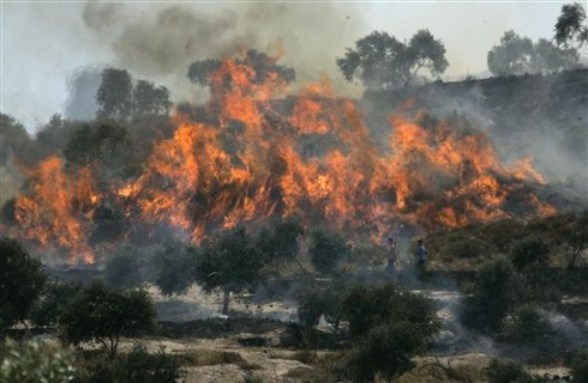 PHOTO: A Palestinian olive grove on fire after a suspected attack by Israeli settlers (AP/Nasser Ishtayeh)

On Wednesday, the body of a Palestinian teen was found in a wooded area of the city after he was forced into a car by unknown assailants near his home earlier in the day. He is widely believed to have been killed by Israelis in response to the killing of three Israeli teens, who disappeared in the occupied West Bank last month and were buried on Tuesday.

Following Mohamed Abu Khdeir's murder, Israeli Prime Minister Benjamin Netanyahu and other Israeli officials condemned the killing and called for calm. However, critics, including Mohamed's family, have blamed Netanyahu and other Israeli leaders for helping to foment an atmosphere of virulent anti-Arab racism, demands for violent revenge, and physical attacks against Palestinians that have swept much of the country in recent days.

The IMEU offers the following fact sheet providing a snapshot of the incitement typical of Israeli political and religious leaders that has helped fuel growing racism and intolerance in Israel. For reference, also see our recently released fact sheets, A Case Study in Complicity: The Israeli Government & Extremist Attacks Against Palestinians and Israel’s West Bank Crackdown.

FANNING THE FLAMES OF HATE: ISRAELI OFFICIALS IN THEIR OWN WORDS (10 EXAMPLES)

“[A] Jew always has a much higher soul than a gentile, even if he’s gay.”

- Rabbi Dov Lior, Chief rabbi of settlements in Hebron and Kiryat Arba, head of the Council of Rabbis of Judea and Samaria [the occupied West Bank], and leading figure in the religious Zionist movement. (January 2011)

“[Most of the] Muslims that arrive here do not even believe that this country belongs to us, to the white man."

"Goyim [non- Jews] were born only to serve us. Without that, they have no place in the world; only to serve the People of Israel... Why are gentiles needed? They will work, they will plow, they will reap. We will sit like an effendi and eat... With gentiles, it will be like any person: They need to die, but God will give them longevity. Why? Imagine that one's donkey would die, they'd lose their money. This is his servant. That's why he gets a long life, to work well for this Jew."

"You can't teach a monkey to speak and you can't teach an Arab to be democratic. You're dealing with a culture of thieves and robbers. Muhammad, their prophet, was a robber and a killer and a liar. The Arab destroys everything he touches."

“Arab culture is very cruel... Arabs use different codes and violent norms that amount to an ideology,"

“Racism originated in the Torah... The land of Israel is designated for the people of Israel."

"Hurting small [non-Jewish] children makes sense if it's clear that they'll grow up to harm us, and in such a situation - the injury will be directed at them of all people.”

- The King’s Torah, written by Rabbi Yitzhak Shapira and Rabbi Yosef Elitzur, from the Od Yosef Chai Yeshiva in the settlement of Yitzhar. (2010)

"If we go on like we have until now, we will lose the Galilee. Populations that should not mix are spreading there. I don’t think that it is appropriate for [Jews and Arabs] to live together.”