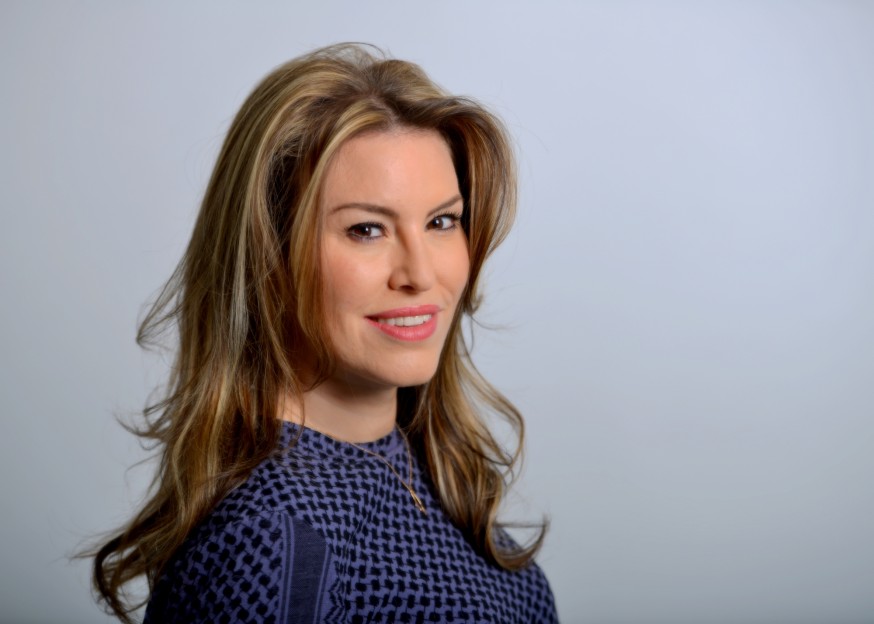 In July 2014, as Israel was hammering Gaza in a seven-week-long assault that ended in the deaths of over 2,300 Palestinians and some 10,000 more injured, groups of Israelis on the tops of nearby hills gathered to cheer. For a moment, it seemed the entire world had stopped to watch. Like many Palestinians and their supporters around the world, filmmaker Farah Nabulsi was unable to look at anything else. Three years later, she has amassed a body of deeply personal and wrenching artistic work describing what she saw, not only in Gaza but in the West Bank where her own family’s roots lay. Nabulsi’s short film Oceans of Injustice is scheduled for free online release on May 16, 2017, at oceansofinjustice.com.

Farah Nabulsi, the daughter of a Palestinian mother and Palestinian-Egyptian father, grew up on a quiet street in London. A banker for many years with JP Morgan and then the founder of a private business, Nabulsi decided to leave the business world after a trip to Palestine in 2013. The systematized oppression and humiliation of Israel’s military occupation was something Nabulsi didn’t understand on her trips to Palestine from London as a child. It was only after a trip for the first time as an adult that she learned about what it meant to be a Palestinian living in Palestine. While there, she learned about the daily humiliations of Palestinians trying to go to school and work, their abuse at Israeli checkpoints and terminals in the West Bank, the discrimination against Palestinian citizens of Israel, the overall torment of life under Israeli apartheid. After this life-changing trip, Nabulsi decided to devote her professional life to artistic productions documenting the human rights abuses that Palestinians experience at the hands of the Israeli government.

Months after her trip, Nabulsi, sifting through narrative pieces she had written on the way home from the West Bank in 2013, realized that her writing could come to life in films that would speak to Western audiences who don’t know enough about Israel’s brutal and oppressive military occupation or its settler-colonial enterprise. “The short film format is instantly impactful, easier and quicker to watch, and more likely to be shared online,” Nabulsi said.

Oceans of Injustice, Nabulsi’s first film, is an experimental take on the layers of cruelty and severe hardship that envelop Palestinian society. The website by the same name is a categorical rendering of Israel’s assaults against the Palestinians who remain on their land. It is the only website of its kind, a site where a virtual mosaic of injustices is presented, fact by fact, so that viewers can apprehend the full context of life for Palestinians living under occupation. The film and website provide an artistic and educational platform that together rehumanize Palestinians whose voices are silenced by Israel’s sympathizers and powerful lobbies.

Children play an essential role in Nabulsi’s artistic work. She is a mother of five (three sons and two stepdaughters). Interviewed the day after Palestinian Prisoners Day, Nabulsi described the impetus for her second short film, Today They Took My Son. As the title suggests, the film tells the story of a woman whose young son is taken by Israel’s army when he throws a stone at soldiers demolishing a Palestinian home. The woman, powerless to help her ten-year-old son Khalid, was told by a neighbor that he was calling her name when they took him away. Nabulsi says, “There is nothing more excruciating, in this life, than not being able to help your child. These are people whose land was taken, whose homes were taken, whose dignity was taken, whose freedom has been taken, but to also have your children taken?” Nabulsi takes a moment to weigh the question. “What we are seeing is a systematized process of breaking a society through their children.”

The Nightmare of Gaza, Nabulsi’s dramatic audio production recounting the horrors of the 2014 Israeli onslaught, tells the story of a woman in Gaza who loses her young child along with her parents and sister to Israeli bombs dropped on her home. In the audio production, the woman asks why the world has abandoned Palestinians in their search for safety and other basic human rights. There is no answer. Nabulsi’s creative life is tied to this question, and to artistic advocacy on behalf of the Palestinian people. “You look at so many dark moments in history when the light was very difficult to see. There is light, there is hope and there can be a just peace, but first you need acknowledgement. Israeli society and global communities need to acknowledge what has been done to Palestinians and from there comes atonement. As long as people deny the pain, suffering and injustice of another then it is very hard to find lasting solutions. The global community needs to openly acknowledge what Israel is doing in Palestine.”