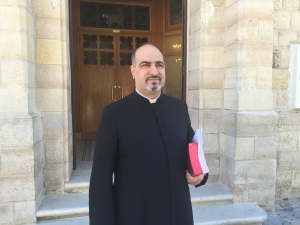 Catholic parish priest, Father Ibrahim Shomali does not attach himself to political slogans, instead he subscribes to the notion that "the church is not a church if it does not stand with the people." This is why when he received the news that more than half of his parish's lands in the Cremisan valley in Beit Jala were under confiscation orders from the Israeli army he wanted to do something about it. "After looking into all possibilities I decided that since governments around the world have failed us, and since no one is putting pressure on Israel to stop the building of the wall in the heart of our community, the only one who could help us is God."

With a small table, a chalice, and a tray of wafers for communion, 39-year-old, Father Shomali has been setting up an alter under the shades of the olive trees in the Cremisan valley and performing a weekly mass for the people to come and pray for a miracle. One of the oldest agricultural terrains in the world, and one of the few remaining green spaces in the Bethlehem area, the Cremisan valley also hosts the monastery of the Salesian monks who have been cultivating the land and making the notorious Cremisan wine since 1885.

According to Father Shomali, God is listening. "After a year of staying in faith and constantly praying we now have the attention of the world. There are legal proceedings in the High Court to try to save the land. People are joining us in our mass from all over the world. We had high ranking members of the church visit our weekly mass and even the Pope knows about our case."

But initiating efforts of peaceful resistance is not something new for Father Shomali. When his cousin, Anton Shomali, was killed during an Israeli invasion of his town in 1992, Father Shomali was still a young teenager studying in the seminary. "I was deeply affected by the death of my cousin and I felt that I was in a place of privilege because I was living in the safety of the seminary. So I started organizing ways to help people during curfews by sending families food or assisting when they needed medical attention. There are many ways to resist injustice and serving people is definitely one of them." Without a doubt, Father Shomali's life has been a life dedicated to giving. After spending four years in Rome studying for a PhD in Theology, Father Shomali returned to his home parish to teach. "I was missing home a lot during my time in Europe and I knew I had to come back to Palestine because when a person dedicates his life to a purpose, he cannot look for material gains."

This year Father Shomali is creating an unconventional nativity scene in front of his church, the church of the Annunciation. He is having someone make an installation art piece that will be a visual of the separation wall. He wants to place the wall as a backdrop behind the Christmas tree to send a message to the world that the birthplace of Jesus is in danger. "I believe that we will persevere but until then we must continue to pray that our lands and our homes will be protected. But even if that does not happen I know I have created a church that is of the people and if that is all I have done then I am grateful."