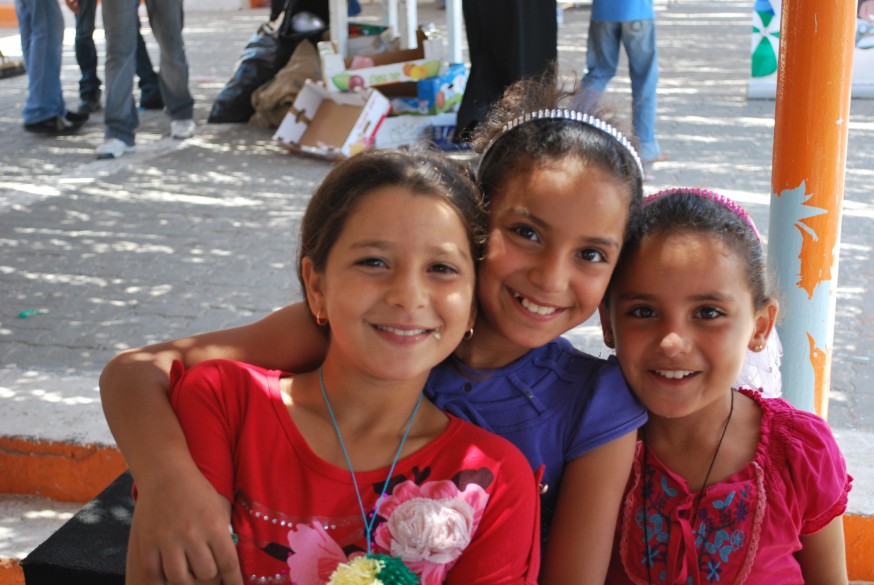 Children who lost parents in the 2009 war in Gaza are beneficiaries of the Mustaqbali program.

For 6-year-old Khalid Malaka, the 2014 Israeli siege on Gaza was the end of life as he knew it. The young Gaza City resident lost both his parents and both of his siblings when his house was bombed — he was the sole survivor, and miraculously escaped with minor burns. Now, Khalid lives with his grandfather and deals with the daily onslaught of post-traumatic stress disorder; he struggles to cope with the memory of losing both his family and his home.

About 20 miles south of Khalid in the Al-Shoka area of Rafah lives the Zamily family. This summer, Salama and Amina Zamily, parents to 12 children, were both killed in the bombing. Now, their brood is left to fend for itself, and some of the older Zamilys are torn as to whether they should continue with their education, or work in order to support themselves and their siblings.

These are just two examples of the more than 2,500 children that lost one or both parents in the latest assault on Gaza, which marks the third time in a decade that the IDF has pummeled the Strip with bombs that kill and disfigure civilians, and leave piles of rubble where buildings once stood. These children join an already devastatingly large community of youth whose support network has been decimated by the regular violence visited upon Gaza by Israel. In the majority of cases, the children’s father is the one killed — they’re often out looking for shelter and food during the violence — and that often means the household no longer has regular income and the family is thrust into poverty. The needs of these children left behind are many: They crave the basics like housing, food, clothing, and school books, which can be hard to acquire when Israel’s iron-fisted blockade of Gaza’s borders continues, and reconstruction funds have run dry. These children are also in dire need a comprehensive program to alleviate their considerable psychological trauma.

Stepping Into a Dire Situation

This is often when the Welfare Association (WA), the largest nongovernmental Palestinian humanitarian organization in existence, steps in. WA, which operates in the West Bank, Gaza, Palestinian communities in Israel, and Lebanon, has made the issue of children who lost parents a high priority. Their program for the 1,800 children who lost a parent in the 2009 war is called Mustaqbali (“my future” in Arabic) and works with local institutions (schools, clinics, recreation centers, etc.) to see that these children get health care, education, shelter, nourishment, clothing, and counseling.

Now, WA plans to launch a similar aid program for children who lost parents in 2014. Like Mustaqbali, the new program will be comprehensive in scope, and offer support to children until they are 22-years-old.

Maha Muhaisen implements the Mustaqbali aid program on the ground in Gaza, and describes a dire situation for the kids she works with, all 1,800 of whom she knows by name. “These are not ordinary children,” Muhaisen says. “They have witnessed extreme violence; some of them have been witness to three wars, and it deeply impacts their psycho-social state and has negative effects on their personality. We address this in many ways, from recreational activities to therapy to empowerment programs to help their mothers (if they’re alive) become financially secure.”

The cost of offering this kind of comprehensive support throughout the young lives of these children is considerable. While WA has its own fundraising mechanism, business leaders and philanthropists Abbas (“Eddy”) and Samar Zuaiter wanted to contribute to WA’s work with children and entice other American donors to do the same. So they created the Fostering Leadership for Young Palestinians (FLYP) fund, which was designed and housed at the Center for Arab American Philanthropy (CAAP).

“As the only Arab American community foundation in the country, CAAP prides itself on empowering its community by demonstrating the impact of giving together,” said Maha Freij, deputy executive director and CFO of the Arab Community Center for Economic and Social Services (ACCESS), the organization that launched CAAP in 2006. “FLYP is our only fund focused on leveraging our relationships and expertise for the orphans of Gaza.”

FLYP embodies this spirit of collective giving. The Zuaiters donated $100,000 of their money to generate $200,000 more from community members through a 50 cents to the dollar match the FLYP fund offers. They hope to raise a total of $300,000, and the money will go directly to WA’s Gaza orphans fund. Of course, this sum will only cover part of what is needed in the long term, considering the program’s scope. While the needs of the 2014 children are still being assessed, so far the cost to care for all the children through their 22nd birthdays is an estimated $30 million.

“As the tragic 2014 Gaza attacks unfolded, I was in a painful state of shock and horror. Like most people, I found it difficult to ignore the indiscriminate attacks against innocent and helpless people,” says Abbas (“Eddy”) Zuaiter. “How could modern society permit such atrocities? My shock quickly transformed into frustration and anger, and I knew we needed to do something to help the children of Gaza. That is why Samar and I started working with Welfare Association and CAAP to help fund an existing program that we knew was reliable and effective.”

In Gaza, Maha Muhaisen says the program can indeed be effective, and when there is funding to keep up the momentum, she finds moments of positive reinforcement that prove progress is possible, even under unrelenting Israeli occupation.

“We are trying to support them, and sometimes we see important examples of how that is working,” says Muhaisen. “There is a 16-year-old girl named Yasmin in our program, and her mother is illiterate. When she started with our program, she was having real difficulties in school, especially in math. Today, she sent me her latest certificate — she got a 99.4% in math. She was so happy, and she said to me, ‘It’s because of your support that I did this.’”

To learn more about the Fostering Leadership For Young Palestinians Fund (FLYP), visit the CAAP website.