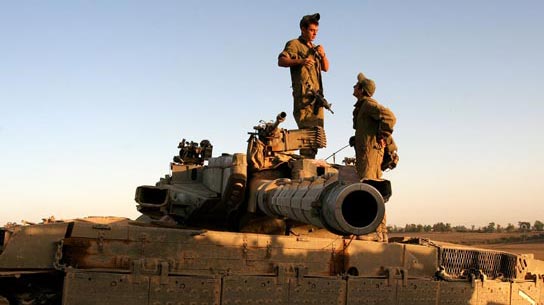 Israel is the largest cumulative recipient of U.S. aid since World War II. Since 1985, it has received an average of $3 billion in grants annually, about two-thirds of it for military aid. (source) In recent years, a plan to reduce Israel's economic dependence on foreign aid has led to gradual reductions in the proportion of economic to military aid. In 2005, for example, military grants amounted to $2.63 billion, and economic aid to $360 million.

Unlike any other U.S. aid recipient, Israel receives all of its aid in the first thirty days of the fiscal year, instead of quarterly installments. And unlike any other recipient of U.S. aid, Israel is not required to account for its expenditures. Israel, thus, is free to spend U.S. aid as it sees fit, including in ways that contradict U.S. policies - as in the building of settlements in the Occupied Territories.

The U.S. Department of State regularly reports serious human rights abuses committed by Israeli troops in the Occupied Territories, implicating such U.S. domestic legislation as the Arms Export Control Act, which bars arms transfers to human rights abusers. Yet neither Congress nor the President have ever taken serious steps to ensure that U.S. arms are employed by Israel in a manner consistent with U.S. law.

Beyond this military and economic aid, Israel has also received support for special military research and development projects (such as $625 million to develop the Arrow missile), and for other special needs. Israeli officials have announced that they will seek $2.2 billion from the U.S. to support the redeployment of its army outside of the Gaza Strip, part of its "Gaza Disengagement Plan".

In addition to the above aid, the U.S. government has provided Israel with over $9 billion in loan guarantees since 1992. These guarantees are worth hundreds of millions of dollars to Israel as they allow the Israeli government to borrow money from commercial lenders at more favorable rates and terms.

Since then, the U.S. has subtracted about $773 million - the amount believed spent by Israel on illegal settlements in the Occupied Territories - from the $10 billion loan guarantees. This has left $9.26 billion still available in guarantees, against which Israel has borrowed about $6.6 billion - meaning, to date, that the sanction has had no direct impact on Israel whatsoever.