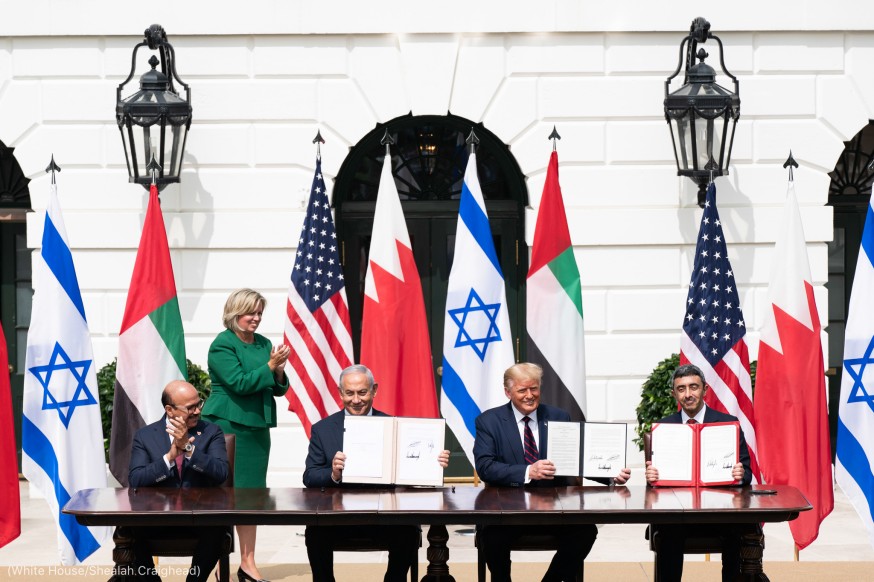 
The so-called Abraham Accords are Trump administration weapons and business deals with authoritarian Arab regimes that undermine a purported US commitment to human rights while simultaneously further marginalizing the Palestinian people in their struggle for freedom, justice, and equality. The deals are in actuality quid pro quos for these countries receiving sought-after US diplomatic and military support. Deals that undermine human rights cannot bring about peace.

ISSUE: Congress is supporting a Trump administration policy of promoting bilateral and multilateral ties between Israel and Arab states by funding $250 million in people-to-people exchanges, forming a congressional caucus to advance these relations, and considering legislation to leverage US pressure in international forums to promote these ties.

While proponents of these deals celebrate deepening bilateral and multilateral Israeli-Arab relations, they neglect to mention the extremely problematic designs and outcomes of the Abraham Accords. These include a failed Trump administration policy of attempting to coerce Palestinians to give up their political rights in exchange for economic inducements; a successful policy of diplomatically isolating the Palestinian people to better enable Israel to consolidate and deepen its apartheid rule; and the conclusion of unseemly business deals with authoritarian Arab regimes which have undercut human rights activists in the region, potentially deepened US complicity in the commission of war crimes, undermined aspirations for freedom and self-determination, and complicated tenuous transitions to democracy.

Of course, everyone wants peace in the Middle East. However, peace must be based on justice and on the fulfillment of the Palestinian people’s long-denied rights to freedom and self-determination. Trump administration policies designed to sidestep Palestinian rights, consolidate Israel’s apartheid rule, and strengthen authoritarian governments in the region will not bring about peace, but its opposite.

Before Members of Congress take further steps to reify these anti-democratic, anti-human rights Trump administration deals, they should cease viewing the Abraham Accords as an unalloyed good and take greater cognizance of the more ominous aspects of these deals.

The Abraham Accords are rooted in a failed Trump administration policy of attempting to coerce Palestinians to give up their political rights in exchange for lavish economic inducements. This strategy was devised by former Trump adviser and son-in-law Jared Kushner and builds upon a more than century-old flawed Zionist belief that the Palestinian people would acquiesce in their subordination if provided with sufficient economic development.

This colonialist mindset undergirded Kushner’s so-called Peace to Prosperity conference held in Bahrain in June 2019. Kushner stated that “For too long the Palestinian people have been trapped in inefficient frameworks of the past,” an apparent reference to their quest for freedom and self-determination. Instead of supporting the inalienable political rights of the Palestinian people, the Trump administration’s Peace to Prosperity promotional materials were replete with business school buzzwords, promising to “Unleash Palestinian economic potential” and “create a new model of economic growth and investment,” while remaining mum on their political rights. For a pledged $50 billion in investment, Palestinians were expected to forgo their rights and content themselves with economic betterment under Israel’s perpetual domination. It is no wonder that Palestinians boycotted the Bahrain conference.

This plan formed the basis of the Trump administration’s widely panned January 2020 release of its so-called Peace to Prosperity political and economic “vision” for Palestinian-Israeli relations. As summarized by CRS, the plan would have backed Israel’s annexation of 30 percent of the West Bank, including almost all Israeli settlements and the Jordan Valley; Palestinians would not be enabled to exercise sovereignty over any portion of their capital city of Jerusalem except for areas within its expanded municipal boundaries which are cut off from the rest of the city by Israel’s illegal wall; Israel would retain an all-encompassing degree of “security control” over the entirety of the West Bank; Palestinian refugees would be denied their international rights to repatriation, and a truncated Palestinian statehood would be made conditional and implemented only after a laundry list of Israeli demands were fulfilled. Trump’s plan was a non-starter.

The Abraham Accords are business and weapons deals with authoritarian regimes

Former Israeli Prime Minister Benjamin Netanyahu believed that the Trump administration plan allowed him to annex Palestinian land prior to even entering negotiations. While the Trump administration was internally divided over Netanyahu’s plan to annex part of the West Bank, it was the United Arab Emirates (UAE) that proposed to establish diplomatic relations with Israel in exchange for Israel temporarily freezing its de jure annexation plans; however, de facto annexation, through ongoing Israeli colonization and Palestinian dispossession, has continued unabated, and has even intensified.

According to the UN and Human Rights Watch, the UAE and forces under its control have been complicit in the commission of potential war crimes in Yemen, including unlawful airstrikes against civilian targets, arbitrary detention, disappearances, and torture. The UAE was rewarded by the Trump administration for initiating the so-called Abraham Accords through the signing of a $23 billion arms deal on its last full day in office, which includes “50 F-35A fighters valued at $10.4 billion, 18 MQ-9B drones valued at $2.97 billion, and various munitions valued at $10 billion.” If delivered, these weapons will further implicate the United States in the commission of potential war crimes in Yemen.

Bahrain was the second country to agree to diplomatic relations with Israel. Although it did not appear to receive anything tangible from the United States in return, the establishment of Bahraini-Israeli ties has certainly played an indirect role in muffling US concern about its atrocious domestic human rights record. The UAE, Bahrain, and Israel signed their agreements at the White House in September 2020.

Sudan and Israel tentatively agreed to some form of diplomatic ties in October 2020, although the scope of the agreement is not clear and has not yet been formalized. As a result of these initial steps, the Trump administration delisted Sudan from the list of countries supporting terrorism, removing sanctions and opening up trade and investment opportunities for the country. Although Sudan’s inclusion on the list was an anachronism dating back to Osama bin Laden’s residency in the country in the 1990s, its removal only after agreeing to a deal with Israel sheds light on the politicized nature of this list. In addition, the Trump administration advocated for the deal with the military wing of the transitional council, bypassing what should have been a civilian decision, and thereby introducing an added element of tension to what has been a tenuous and fitful transition to democracy.

Morocco and Israel agreed to establish formal diplomatic relations in December 2020. As a reward, the Trump administration recognized Morocco’s annexation of and sovereignty over the Western Sahara. This crude quid pro quo undercut Sahrawi (as the people of Western Sahara are known) self-determination and set back, perhaps irreversibly, their hopes for an independent state.

Not only did the Trump administration’s deals deepen US complicity in the commission of war crimes, ignore human rights abuses, complicate democratic transitions, and undermine self-determination; by design, these agreements also are meant to politically isolate the Palestinian people from the natural ties of solidarity expressed by Arab people by concluding deals over their heads between their undemocratic governments and Israel.

This isolation of the Palestinian people facilitates the deepening of Israel’s separate-and-unequal regime of apartheid rule. In addition, it overturns the traditional premises of Arab-Israeli peacemaking–what Kushner referred to as “inefficient frameworks of the past”–and UN Security Council Resolution 242; namely, that Israel is required to withdraw from Occupied Palestinian Territory in exchange for peaceful relations. In the Trump administration’s view, the Abraham Accords are meant to allow Israel to have its cake and eat it, too; in other words, to enjoy the benefits of diplomatic relations with Arab governments while maintaining its military rule over Palestinians in the West Bank and Gaza Strip.

General Miguel Correa, who played a central role in the negotiations leading to the Abraham Accords, admitted that the intent of the deals is to isolate and marginalize the Palestinians. “The plan was that if we get everybody around [the Palestinians] to recognize the nation of Israel, then where does that leave the Palestinians? They’ll have to come, because they’re on an island.” Presumably the only way for the Palestinians to then get off their “island” would be to acquiesce to Israeli diktats.

Despite these glaringly baleful intentions and results of the so-called Abraham Accords, many Members of Congress have enthusiastically supported them without adequately considering their ulterior motives. Indeed, many Members of Congress who would be hard-pressed to recognize any other accomplishment by the Trump administration as being positive, nevertheless cite the Abraham Accords as the one thing that it supposedly got right. As demonstrated by this memo, Members of Congress should take a more critical view before pressing ahead heedlessly with legislative measures designed to reinforce and expand these Trump administration deals.

In December 2020, Congress passed the FY2021 Omnibus and COVID Relief and Response Act, which was signed into law by President Trump (P.L.116-260). Included in this bill is the Nita M. Lowey Middle East Partnership for Peace Act (MEPPA) of 2020, which appropriated $250 million over five years to “promote economic cooperation, people-to-people peacebuilding programs, and advance shared community building, peaceful coexistence, dialogue and reconciliation between Israelis and Palestinians” according to USAID. Although versions of this bill had been lobbied for more than a decade, the timing of its final passage inexorably ties it to the so-called Abraham Accords.

Like those deals, MEPPA presents itself as an alternative to, not as a complement of, the fulfillment of long-denied Palestinian rights. In other words, Palestinians are being asked to participate in economic cooperation, peace-building, coexistence, dialogue, and reconciliation with Israelis while Israel’s oppressive apartheid rule remains intact. This is likely the first peacebuilding program funded by Congress that asks the oppressed to reconcile with their oppressor before the oppression is undone. In this light, such funding can only be seen as another US attempt to reconcile Palestinians to their oppression.

In January 2022, a small bipartisan group of Senators and Representatives founded Abraham Accords Caucuses. The goal of the caucuses is to “incentivize the expansion of the Abraham Accords”, undoubtedly through additional deals with authoritarian regimes that undermine a professed US commitment to human rights. The caucus is conspicuously silent on Palestinian self-determination, merely pledging that “Israelis and Palestinians live side by side with freedom, security, and prosperity,” vacuous terminology which is not grounded in international law.

Likely high on the agenda of the caucuses will also be the passage of the Israel Relations Normalization Act (S.1061/H.R.2748). In addition to the problematic nature of reifying Trump administration deals with authoritarian regimes, this legislation is controversial for additional reasons, among which are:

Before taking additional steps to reinforce Trump administration deals with authoritarian regimes, Members of Congress should take a more nuanced and critical view of the so-called Abraham Accords. Members of Congress who support human rights must ensure that they have a clear understanding of how these deals implicate the United States in the commission of potential war crimes, undermine human rights commitments, deny peoples self-determination, and complicate democratic transitions, all while further marginalizing the Palestinian people and thwarting their long-denied rights to freedom, justice, and equality.