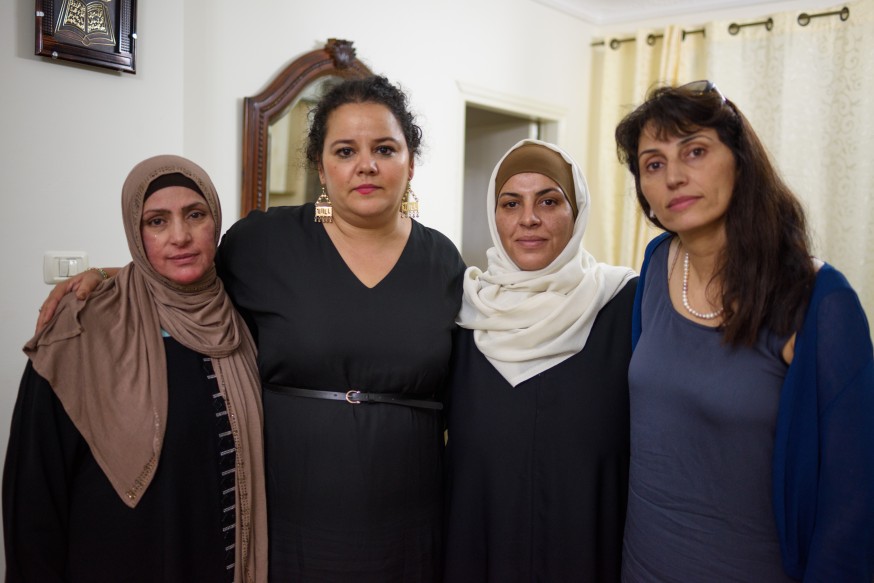 Fadi Alloun was killed on October 3 in East Jerusalem when a group of settlers chased him and an Israeli officer shot him at close range at least seven times. Watch the video.

DB: What would you like people to know about Fadi?

HA: Fadi and his father are – I cannot believe I have to use the past tense now – were – one soul in two bodies. Fadi adored Samir, and Samir adored Fadi. I worry about my brother now: what will he do when part of his soul has now died?

Fadi turned 19 on the 29th of September and just a few days before that, he finally got his driver’s license. He did not get to live a young man’s joy of buying his first car. He was like a lot of young men with dreams of building a house and getting a good job. Fadi loved to sing. Oh how he loved to sing. His voice was like that of a bird: light and full of melody. Now when I think back on his songs, I remember that he only sang sad songs. Why did he only sing sad songs? Fadi was a simple young man – he loved to make sure that he was always presentable and well-dressed and he was an athlete. Fadi used to run throughout Jerusalem and, in fact, the day that Fadi was murdered he was wearing new running shoes. That’s how we knew it was him.

I can’t believe I won’t hear his voice any longer.

WA: He loved to tell jokes too. Fadi was like my brother – we were raised together. He was jealous of all of the attention I received when I was born and we used to tease one another when we got older. He moved to Isawiyya only seven years ago but we used to gather as a family on Fridays. I miss hearing his voice. I can’t believe I won’t hear his voice any longer. No one disliked Fadi. No one. He was adored because he adored everyone.

DB: What do you know about what happened that day?

HA: I could not sleep that night. I don’t know why. I live in Beit Hanina and Fadi and my brother live in Isawiyya so I did not see Fadi leave that morning. I decided that since I had insomnia that I would stay awake until after fajr prayers and then head to sleep. I stayed awake, watching television when suddenly I saw Fadi’s name appear on the television informing viewers that he was killed. I was in shock and disbelief. How is it that Fadi was shot and killed? Maybe there was a different Fadi Alloun? I called my brother Samir to ask about Fadi and he said, “Fadi just went to pray at Al Aqsa and will be back shortly. Why do you want to speak to Fadi at this hour?” I didn’t know what to do. I broke down.

Fadi’s friends started calling shortly thereafter. Because my brother did not know yet, my sisters, brother, and I decided to go over to Samir’s house to be with him when he heard the news. We rushed over to Issawiya to be by my brother’s side. Fadi’s friends tried to break the news gently: they first told Samir that Fadi was injured but that he would be alright but when Samir saw us he knew that Fadi was gone.

Fadi had a habit of waking up early and going to pray the dawn (fajr) prayers in Al Aqsa mosque. He was wearing his jogging pants and his new shoes. He said he wanted to go for a run after praying. That morning, he was very hungry so he stopped by a bakery in Musrara where he bought a Jerusalem bread roll with sesame and some falafel. People saw him eat the bread and falafel. We were told that a group started to form around Fadi and the rest you can see on the video.

I have watched and rewatched the video over and over again. Fadi was like a deer being hunted down.

I have watched and rewatched the video over and over again. Fadi was like a deer being hunted down. You see him running from one person to the next before running towards the police for protection and they gunned him down. They gunned him down. All it took was for the Israelis to say that he was an Arab and they shot him dead. Fadi did not pose a risk to anyone. He was not out to harm anyone. He was going to pray; to worship God. But you can hear their [Israeli] racism and hatred: when Fadi was gunned down like an animal the Israelis started shouting “YES!!” and “Death to Arabs.”

The fact that Fadi did not pose a threat to anyone is apparent on the video. The police officer asks [in Hebrew] where are those injured and you hear someone from the crowd say “none here.” If Fadi was really posing a risk, why were there no injured individuals? We still have a lot of questions surrounding Fadi’s murder: why did they need to shoot first when he posed no threat? Where are the injured? Where is the weapon? How do we know he wasn’t acting in self-defence if he did anything at all? We know that the streets of Jerusalem are filled with cameras. Why haven’t the police provided us with any of the street camera footage? What is going to happen to the people who accused Fadi of posing a threat? Will they ever be held accountable?

DB: What happened after you learned of Fadi’s death? 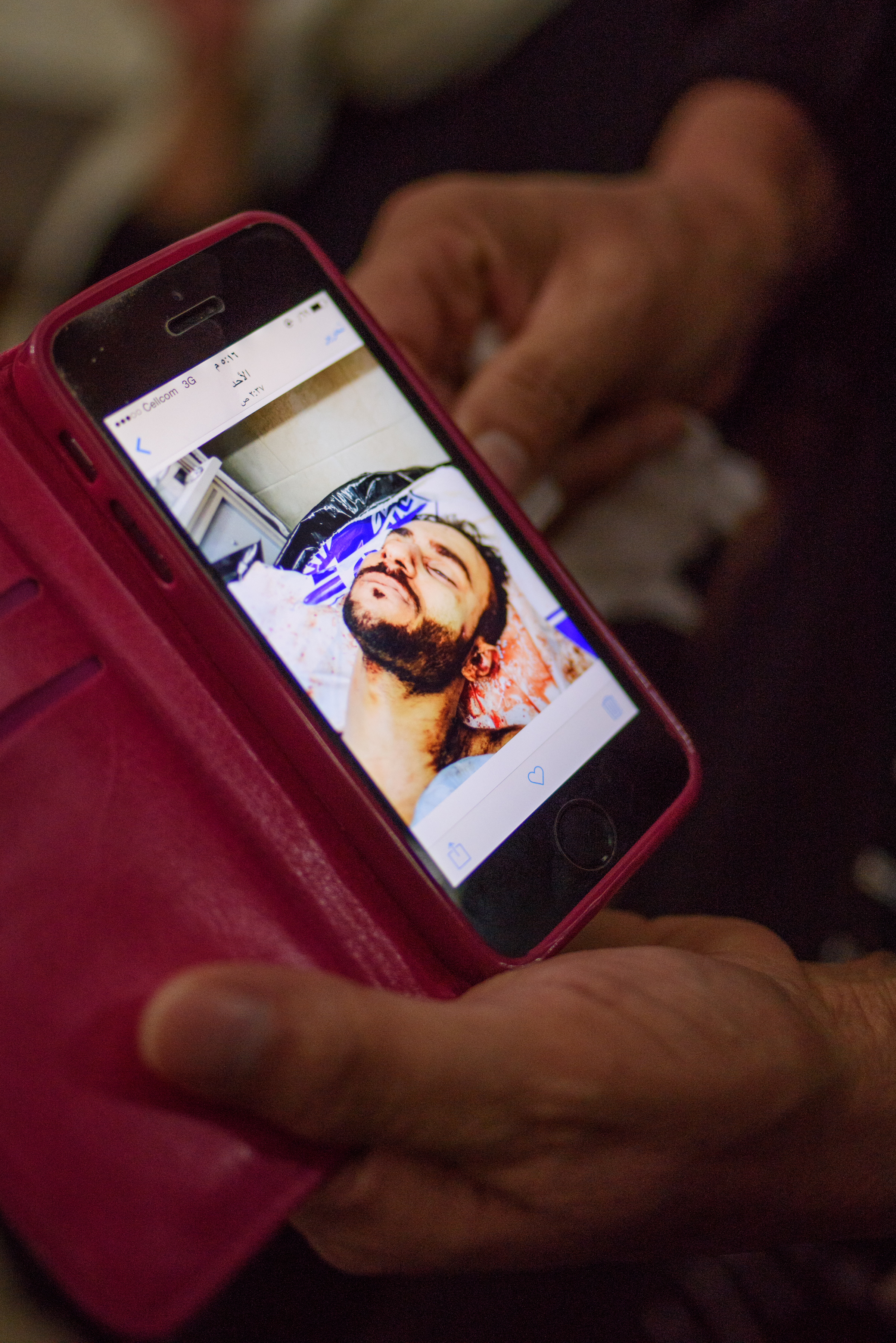 HA: I was at Samir’s house in Isawiyya and the Israeli forces raided Samir’s home. These were huge men carrying big weapons. One of them picked me up by my dress and threw me out of Samir’s home. They ransacked the place and brought in dogs to search the whole house. They broke Samir’s furniture into pieces in a cruel and unnecessary manner. They killed his son and ruined his life. Do they have to break his house too? Samir and Ali, my other brother, we immediately arrested and taken in for questioning. So here we were, Samir’s sisters mourning the loss of our nephew, watching our brothers get arrested and witnessing Samir’s house being ransacked all because some accused Fadi of doing something?

The worst part came later. As Muslims, we believe that the dead should be buried right away and yet when it came to Fadi, the Israelis held his body for a whole week. Why? What good came from withholding his body? Did they want to punish us? Did they think that we are going to love them for doing this to us? We had to get lots of people to intervene in releasing Fadi’s body so we could bury him. Why? I have never heard of them withholding the body of an Israeli when he kills a Palestinian. When you can’t bury the body of a loved one, you get no closure. We don’t have closure now, obviously, but at least we were able to say goodbye to him. At least we were able to say goodbye.

I’ve never seen so many people come out for a funeral and I know they came out to say goodbye to Fadi because he was a good person, who harmed no one and whose only crime was being a Palestinian. Isn’t it enough that they have taken our homeland and turned us into strangers in our own homeland? Do they have to take our young children, our future, too?

When Fadi finally arrived, we could see signs of torture on his body. His forehead was bruised and his nose looked broken. I could see the where the bullet holes riddled his body and face.

I don’t know how Samir is going to continue now that Fadi is gone. I want to remember Fadi for the person he was: loving and kind. Now that Fadi is buried we want answers and no one is out there looking for them. 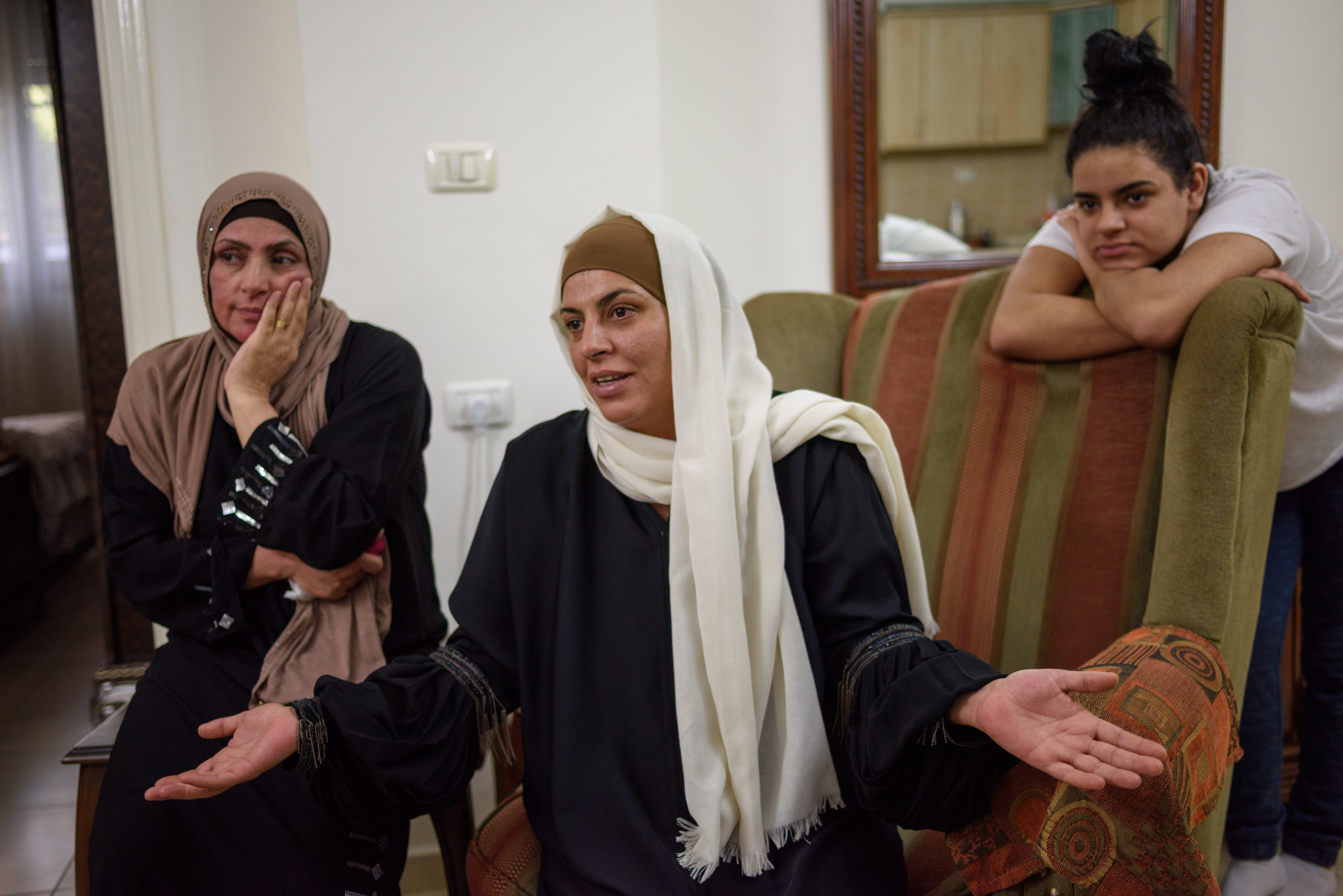