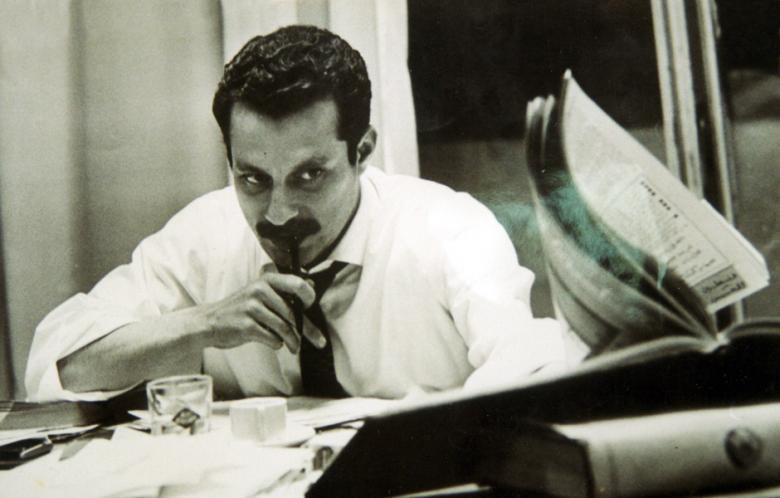 Palestinian author and intellectual Ghassan Kanafani was killed in Beirut in 1972 by a car bomb that was believed to have been planted by Israeli agents. (PHOTO: Al Akhbar English)

On November 6, several news outlets reported that the widow of former Palestine Liberation Organization (PLO) Chairman Yasser Arafat announced that the results of a Swiss investigation into her late husband's death concluded he was poisoned with polonium, a radioactive substance. In November 2012, Arafat's body was exhumed in order for medical examiners to take samples of his remains to test for polonium, part of a murder investigation launched by French authorities at the request of Suha Arafat following the discovery last summer of traces of the highly toxic substance on some of his personal effects. In October 2004, after enduring a two-year siege by the Israeli military in his West Bank headquarters, Arafat fell seriously ill. Two weeks later he was transported to a French military hospital where he died. Doctors concluded he died from a stroke caused by a mysterious blood disorder. At the time, many Palestinians suspected that Arafat was murdered. Over the years, he had survived numerous assassination attempts by Israel, and just six months before his death then-Israeli Prime Minister Ariel Sharon said that an agreement he had made with US President George W. Bush promising that Israel wouldn't kill Arafat was no longer valid, stating: "I released myself from the commitment in regard to Arafat." Two years prior to that statement, in an interview published in February 2002, Sharon told an Israeli journalist that he regretted not killing Arafat when he had the chance during Israel’s invasion of Lebanon in 1982, stating: “I am sorry that we did not liquidate him.'' In 2002, current Israeli Prime Minister Benjamin Netanyahu, then in the opposition following his first term as prime minister (1996-1999), told the Likud party Central Committee: “We must completely and totally eradicate Arafat’s regime and remove him from the vicinity... This one thing must be understood: If we do not remove Arafat and his regime, the terror will return and increase. And only if we do remove them is there any chance of turning a new leaf in our relationship with the Palestinians.” When Arafat died, Netanyahu was serving as Minister of Finance in Sharon's government.

2012 – On November 14, two days after Palestinian factions in Gaza agree to a truce following several days of violence, Israel assassinates the leader of Hamas' military wing, Ahmed Jabari, threatening to escalate the violence once again after a week in which at least six Palestinian civilians are killed and dozens more wounded in Israeli attacks. Although Israeli officials know that Jabari is in the process of finalizing a long-term truce, and that he is one of the few people in Gaza who can enforce it, they kill him anyway, marking the start of a week-long assault on Gaza that kills more than 100 Palestinian civilians, including at least 33 children, and wounds more than 1000 others.

2012 – On March 9, Israel violates an Egyptian-brokered ceasefire and assassinates the head of the Gaza-based Popular Resistance Committees, Zuhair al-Qaisi, sparking another round of violence in which at least two dozen Palestinians are killed, including at least four civilians, and scores more wounded. As it usually does, Israel claims it is acting in self-defense, against an imminent attack being planned by the PRC, while providing no evidence to substantiate the allegation.

Following the assassination, Israeli journalist Zvi Bar'el writes in the Haaretz newspaper: "It is hard to understand what basis there is for the assertion that Israel is not striving to escalate the situation. One could assume that an armed response by the Popular Resistance Committees or Islamic Jihad to Israel's targeted assassination was taken into account. But did anyone weigh the possibility that the violent reaction could lead to a greater number of Israeli casualties than any terrorist attack that Zuhair al-Qaisi, the secretary-general of the Popular Resistance Committees, could have carried out? "In the absence of a clear answer to that question, one may assume that those who decided to assassinate al-Qaisi once again relied on the 'measured response' strategy, in which an Israeli strike draws a reaction, which draws an Israeli counter-reaction."

2010 – In January, suspected Israeli assassins kill senior Hamas leader Mahmoud al-Mabhouh in a Dubai hotel room. As in the past, the Israeli agents believed to have carried out the killing use forged and stolen foreign passports from western countries, including Britain, France, Ireland and Germany, causing an international uproar.

2009 – On January 1, an Israeli airstrike on the home of senior Hamas military commander Nizar Rayan kills him and 15 family members, including 11 of his children.

2006 – On June 8, Israel assassinates Jamal Abu Samhadana, founder of the Popular Resistance Committees and Interior Minister of the Hamas-led Palestinian Authority government, killing three other members of the PRC in the process.

2004 – On April 17, Israel assassinates Abdel Aziz Rantisi, a co-founder of Hamas and its leader since the assassination of Hamas spiritual leader Sheik Ahmed Yassin a month earlier. Rantisi is considered a moderate within Hamas.

2004 – On March 22, Israel assassinates the 67-year-old wheelchair-bound spiritual leader and co-founder of Hamas, Sheik Ahmed Yassin, as he leaves prayers at a mosque in Gaza, killing nine innocent bystanders in the process.

2003 – On March 8, Israel assassinates Ibrahim Maqadma, one of the founders of Hamas and one of its top military commanders.

2002 – On July 23, hours before a widely reported ceasefire declared by Hamas and other Palestinian groups is scheduled to come into effect, Israel bombs an apartment building in the middle of the night in the densely populated Gaza Strip in order to assassinate Hamas leader Salah Shehada. Fourteen civilians, including nine children, are also killed in the attack, and 50 others wounded, leading to a scuttling of the ceasefire and a continuation of violence.

2002 – On January 14, Israel assassinates Raed Karmi, a militant leader in the Fatah party, following a ceasefire agreed to by all Palestinian militant groups the previous month, leading to its cancellation. Later in January, the first suicide bombing by the Fatah linked Al-Aqsa Martyr's Brigade takes place.

2001 – On November 23, Israel assassinates senior Hamas militant, Mahmoud Abu Hanoud. At the time, Hamas was adhering to an agreement made with PLO head Yasser Arafat not to attack targets inside of Israel. Following the killing, Israeli military correspondent of the right-leaning Yediot Ahronot newspaper, Alex Fishman, writes in a front-page story:

"We again find ourselves preparing with dread for a new mass terrorist attack within the Green Line [Israel's pre-1967 border]... Whoever gave a green light to this act of liquidation knew full well that he is thereby shattering in one blow the gentleman's agreement between Hamas and the Palestinian Authority; under that agreement, Hamas was to avoid in the near future suicide bombings inside the Green Line..."

2001 – On July 25, as Israeli and Palestinian Authority security officials are scheduled to meet to shore up a six-week-old ceasefire amidst the violence of the Second Intifada, Israel assassinates a senior Islamic Jihad member, Salah Darwazeh in Nablus.

1997 – In September, the Israeli government of Prime Minister Benjamin Netanyahu attempts to assassinate Khaled Meshaal, the chairman of Hamas’ political bureau, in Amman, Jordan. Israeli agents using fake Canadian passports attempt to kill Meshaal by injecting poison into his ear. The would-be assassins are quickly captured and in the ensuing diplomatic uproar Jordan’s King Hussein threatens to cut off relations with Israel and publicly try and hang the Israeli agents unless Israel provides the antidote to the poison. The Netanyahu government turns over the antidote, saving Meshaal’s life. As part of the deal, Israel also releases Hamas spiritual leader Ahmed Yassin from prison.

1996 – On January 5, Israel assassinates Hamas military commander Yahya Ayash, known as “The Engineer,” detonating explosives in a cell phone he is using. Over the next two months, Hamas responds by launching four suicide bombings that kill more than 50 Israelis. Israeli intelligence later concludes: “the attacks were most probably a direct reaction to the assassination of Ayash.”

1995 – In October, Israeli gunmen assassinate Fathi Shiqaqi, a founder of Islamic Jihad, in Malta, as he leaves his hotel in Valletta.

1994 – On November 2, Israel assassinates journalist Hani Abed, who has ties to Islamic Jihad, using a bomb rigged to his car.

1988 – On April 16, Israel assassinates senior PLO leader Khalil al-Wazir in Tunisia, even as the Reagan administration is trying to organize an international conference to broker peace between Israelis and Palestinians. The US State Department condemns the murder as an "act of political assassination." In ensuing protests in the occupied territories, a further seven Palestinians are gunned down by Israeli forces.

1986 – On June 9, Khalid Nazzal, Secretary of the Democratic Front for the Liberation of Palestine, is shot dead by Israeli agents in Athens, Greece.

1978 – On March 28, Wadie Haddad, a senior member of the Popular Front for the Liberation of Palestine, dies in East Germany from slow-acting poison ingested several months earlier. It is later revealed that Israeli agents were behind his murder.

1972 – On July 8, Palestinian author and intellectual Ghassan Kanafani and his 17-year-old niece are killed in Beirut by a car bomb, believed to have been planted by Israeli agents. A member of the left-wing Popular Front for the Liberation of Palestine, Kanafani was considered a major literary figure in the Arab world and beyond.

1972 – During the 1970s, Israel carries out a series of assassinations against Palestinians they accuse of being involved with the Black September militant organization, which is responsible for the hostage taking of Israeli athletes at the 1972 Olympics in Munich, Germany, resulting in the deaths of 11 Israeli athletes and officials. On October 16, 1972, Wael Zwaiter, a renowned Palestinian intellectual and the PLO representative to Italy, is shot and killed by Israeli agents in Rome. Israel accuses him of being involved with Black September, a charge strenuously denied by PLO officials and those who knew him, who pointed out that Zwaiter was a pacifist.