For Palestinian-American visual artist Manal Deeb, memories of her childhood home in Ramallah are never far from her canvas. The Fairfax, Va., resident has lived stateside for decades, but her early life in Palestine saturates her work from every angle, and gives it a beautifully distinct, melancholy quality.

Deeb, whose pieces include a mix of paint, collage, photography, calligraphy, and digital manipulation, says she constantly draws on mental images of childhood when she’s working. “You think it’s the same as when you left it, but it’s not,” she says. “My grandmother’s house is all gone, but in my mind, it’s still there. I remember playing by the fig trees as a kid, and I even have a series called ‘Memories of Trees.’ I often incorporate tree bark into my artwork to symbolize the Palestinian struggle.” 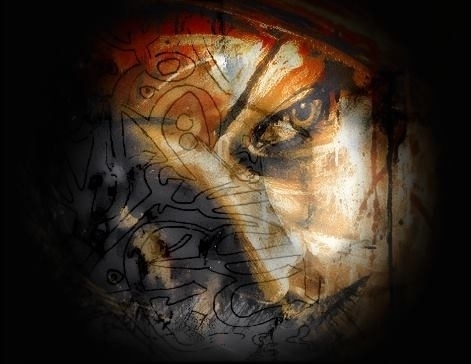 Other symbolic elements in Deeb’s pieces include Arabic calligraphy, muted earth tones to represent the land, and images of the female face (often her own) — the face is frequently the focal point of the work, with color and calligraphy highlighting it. Women are in fact the centerpiece of Deeb’s upcoming exhibit at The Jerusalem Fund Gallery in Washington, D.C., titled “Defaced Yet Alluring,” which opens on February 20, 2015. For this exhibition, Deeb uses digital artwork to explore the strength Palestinian women display as they combat obstacles like occupation and sexism.

“My self-portraits represent a strong, beautiful, Palestinian, Arab woman, and with all the pain in the world, the whole struggle, here she is,” says Deeb. “I think of my mom. I think of all the women and friends back home, and I think of women all over the world. Like my use of calligraphy and language, I find the female face very communicative.”

Deeb’s art does indeed seem to communicate effectively to those who view it — her work has made its way into galleries and shows all over the country, and she hopes to show it more abroad, particularly in the Middle East, in the coming months. One of her pieces is currently being featured in “The Bridge,” a traveling art exhibition put on by the humanitarian arts NGO CARAVAN. “The Bridge” features Muslim, Christian, and Jewish artists from 13 countries who explore the connected nature of their cultures and creeds through artwork. The exhibit is now in Europe, but will make its way to Egypt and the United States by the end of 2016.

Today her star is rising in the art world, but Deeb’s pieces were not always for public consumption — she only began sharing them about seven years ago with the encouragement and support of her husband, Nedal. For most of her adult life, art was more of a closely guarded personal hobby, and served as an emotional outlet. During the first intifada, Deeb used the creative process to work through both the trauma of watching the news and seeing her home in turmoil, and the sadness she felt from being so physically far away. 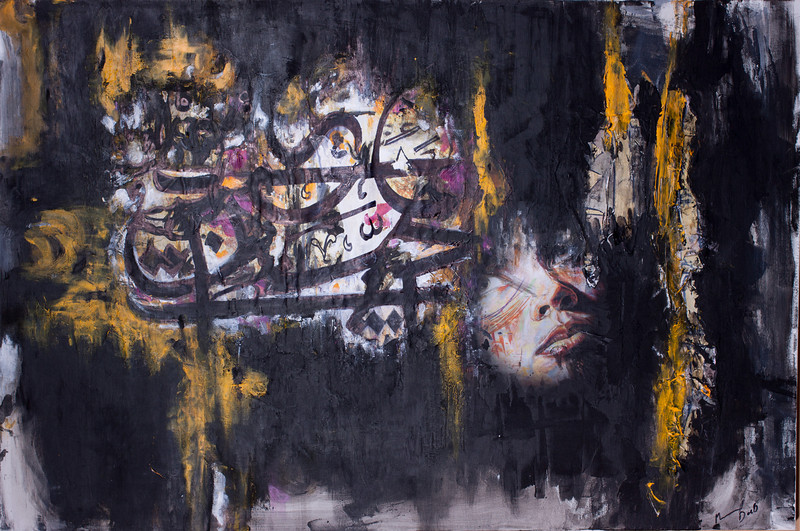 Deeb left Ramallah at age 18, and moved to the United States to study studio arts at the University of Illinois in Chicago, and then went to Minnesota to continue her studies. She then moved back to Chicago where she had two of her three daughters. After she became a mother Deeb took a long hiatus from art to focus on family, but has returned to it with a fervor over the last five years. She also moved to Virginia, just outside of D.C., and decided to go back to school, recently earning a bachelor’s degree at George Mason University in interdisciplinary studies with a concentration in the psychology of art.

“It amuses me how the mind works, and in making art, you can actually look inside your brain and see what’s going on,” says Deeb. “If you look into the research on art and psychology, you’ll see that most artists are prone to madness or at least being overly creative. I think just knowing that makes me feel more creative. It also helps me understand my pain better, and my longing for home.”

Deeb’s creative process is reflective of her artistic temperament, and demonstrates her commitment to making truly inspired work. She works on two to three pieces at a time, and keeps them in her living space. She walks by them, adding a detail here or there, allows the pieces to speak to her, and allows them to speak to each other in what she describes as a dialogue. The results are unknown to her until the very end, she explains, and she credits the unique beauty of her art to the spontaneous nature of this process.

“If you sit and listen to music and it’s touching you to the point where you say, ‘Oh, that feels so good,’ — that’s what making art is like for me. I’ve now discovered that the more I do it, the better I feel,” says Deeb. “Putting my thoughts in front of me and exploring them makes so much sense to me than keeping it all inside.”