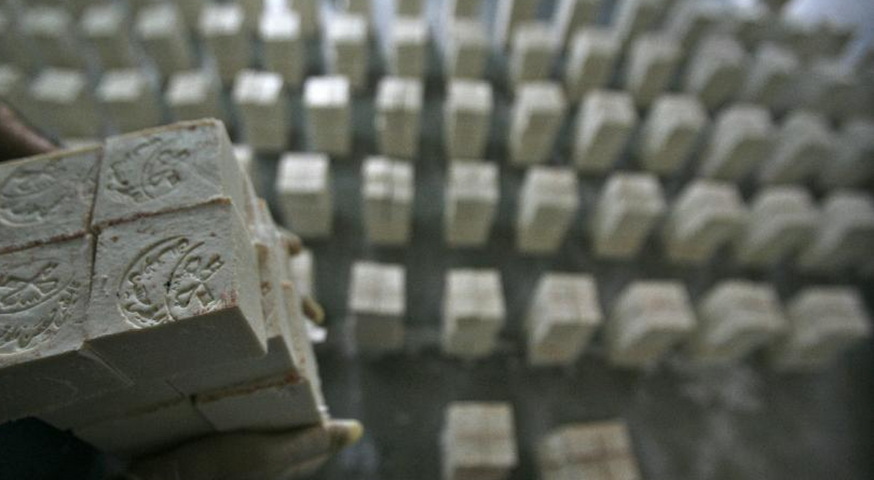 Its formula is strikingly simple - a combination of virgin olive oil, water, and a basic sodium compound - but the history of the olive soap industry in the West Bank city of Nablus has been a complex one of development in the face of constant adversity, ranging from natural disasters to an ongoing military occupation.

The small, white, nearly-scentless blocks, still made today using a centuries-old production method, have been a staple in Middle Eastern households for centuries. The industry continues to produce and export this traditional product despite a rash of recent setbacks and continuing challenges.

It is said that Palestinian women have set aside portions of each year's olive harvest for the production of soap for well over one thousand years. However, in the city of Nablus, the tradition of olive oil soap-making evolved into a major industry and an art. As early as the 10th century, the traditional olive oil soap from the city's factories was exported across the Arab world, and as far afield as Europe, where it is said that sabon nabulsi was the soap of choice for Queen Elizabeth of England.

The ingredients are basic, yet a batch of olive oil soap can take up to a month to produce. Modern producers in Nablus insist the formula has not varied over the centuries, despite the availability of modern chemical compounds found in most manufactured soaps.

Virgin olive oil, water, and a sodium compound are mixed in a large vat over low heat for approximately five days, before the mixture is poured over a large floor space. Shortly afterward, casts are laid down to cut the soap into individual blocks, which are then stamped with the traditional seal of the factory of production.

Once the soap is cut into blocks, it is stacked in geometric towers which allow for air circulation that assists in the drying process. The towering pyramids of soap climb to heights of over eight feet, and line the halls of the factory's drying room for a period of between ten and thirty days, before they can be packaged and shipped.

An industry up against the odds

At the industry's height in the late 19th century, there were nearly 40 soap factories functioning in the Old City of Nablus. Yet today, after a series of natural disasters in the early 20th century - including a 1927 earthquake that devastated large parts of the Old City, and major Israeli military incursions into the city's historic quarter that destroyed several soap factories - only two remain active.

The system of closure imposed by the Israeli military on Nablus beginning in 2000 - primarily a network of checkpoints that encircles the city, choking off the transport routes of this former commercial hub – has had enormous consequences for the soap-making industry.

According to the United Nations Office for the Coordination of Humanitarian Affairs, the cost of transporting goods has increased ten-fold in the years since the closure regime was put into place. The complex system of checkpoints and road blocks has separated suppliers from producers and workers from their workplaces.

"Before 2000, our factory used to produce 600 tons of soap annually," says the general manager of the Touqan factory, one of Nablus' two surviving suppliers of traditional olive oil soap. "Due to the physical and economic obstacles we face now because of the Israeli occupation - and especially the checkpoints - we produce barely half that amount today."

In addition, Israeli military incursions in 2002 caused an estimated $114 million in damages to Nablus and its environs, including the physical destruction of the largest functioning soap factory in the city, and severe damage to several others, many considered to be architectural gems of the Ottoman period.

Yet the industry continues to produce its famed product despite the hardships. The Touqan soap factory's products fill not only the shelves of shops in Nablus and the West Bank, but can also be found in Jordan, Kuwait, and Palestinian cities in Israel, such as Nazareth.

Several initiatives have also been launched with the aim of preserving this unique part of Nablus' cultural heritage. The once-defunct Arafat soap factory, in the center of the Old City, has been restored and converted into a Cultural Heritage Enrichment Center, including exhibition spaces, a research center, and a model of a traditional soap factory that produces small batches of soap according to age-old methods.

Other local non-governmental organizations – such as Project Hope, a humanitarian organization offering English and French language classes to children in neighboring refugee camps – have introduced Nabulsi olive oil soap into Western markets, marketing the traditional product as a way to support local initiatives.