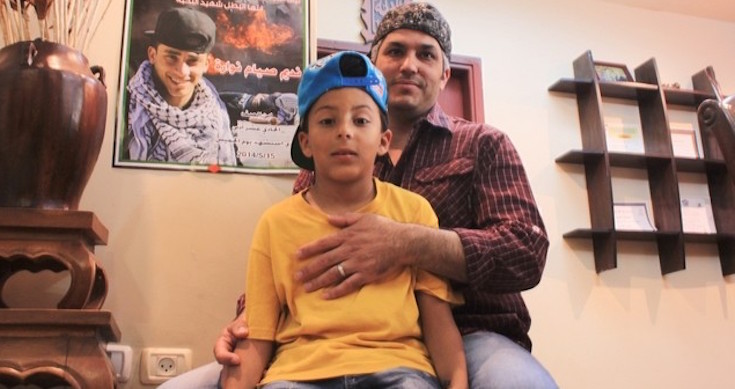 On May 15, 2014, 17-year-old Nadeem Nowarah and 16-year-old Mohammad Mahmoud Odeh Abu Daher were shot and killed by Israeli Border Police about an hour apart in the same location in the occupied West Bank during protests.

In both cases, surveillance video showed that the area was calm at the time and that neither teen posed any kind of threat to the police, who shot them with live ammunition.

Following international publicity and thanks to the camera footage and forensic evidence, the officer who killed Nadeem was finally charged with manslaughter. His trial begins in September.

Nadeem’s death is just one example of a series of incidents over the past year and a half, including four this month alone, in which Israeli soldiers or police have shot and killed Palestinians who didn’t pose an imminent threat to them or anyone else.

Q - What happened on the day that Nadeem was killed?

Siam Nowarah - “The previous night, l became aware that my son intended to participate in the march for freedom on the 66th anniversary of the Palestinian Nakba (“catastrophe”). The next morning, May 15, Nadeem was the first to wake up to get ready to go to school, I am usually the first to wake up, but on that particular day he got up and then woke me up. I went to his room to give him his daily allowance and asked him not to participate in the Nakba Day march. He didn't seem convinced, so I gave up trying to convince him not to go. I then asked God to guard and protect him from any harm.

“Around 1 PM, my wife asked me to call to check on him, so I spoke to him via phone. He said he was currently in Ramallah, and I asked him not to come home late. Around 2 PM, my brother, who was present with me at the time, received a telephone call informing him that Nadeem was in the hospital, so we quickly went there.

“While approaching the hospital I felt that my legs couldn't hold me anymore. I also felt numbness in my hands. I didn't inform my wife and children about what had happened yet. When we arrived at the hospital I was told that my son was shot in the chest and his condition was very critical. The doctor then came asking for people to donate blood, as Nadeem was bleeding badly and needed a transfusion. For a moment I felt hope as many young men raced to donate blood, but to my surprise, 15 minutes later my son was pronounced dead.”

Q - What has the response of the Israeli government and military been to Nadeem’s killing?

SN - “When Nadeem was murdered there were security cameras that recorded what happened to my son. Israel declared on its official military website that its soldiers and police didn't use live ammunition that day, but the next day Defense for Children International released the security camera footage. Israeli officials originally claimed that the DCI video was fabricated to make Israel look bad. Following the release of another video of the incident, filmed by CNN, the border policeman accused of my son's murder was placed under house arrest, which shows how lightly Israeli officials are taking this case.”

Q – What is the status of the case now and what are you focused on?

SN - “In November 2014, we presented strong evidence to Israeli authorities, such as photos, videos, DNA tests, and forensic opinions. This evidence also included the medical report that was done on Nadeem's body when examined by a committee of doctors from the United States, Denmark, Israel and Palestine.

“My focus now is to let the world know what happened to Nadeem. Israel says that it is a state of laws. My son’s case will show to the world whether it is or not.”

Q - Do you believe that you will get justice for your son through the Israeli court system?

SN - “I do not know if I will get justice or not. Only God knows. But I will do all that I can to ensure that my son's blood was not spilt in vain, and that his killer is held accountable for his actions.”

Q - What was Nadeem like as a person, and how has his loss impacted your family?

SN - “Nadeem was wonderful. He was well-behaved, shy, caring, affectionate, and a tenderhearted person and innocent child. It was his dream to finish his education in America. He loved playing sports such as basketball, swimming, running, and kickboxing. He also was an animal lover and loved to ride horses. Nadeem loved everyone and rejected hatred.

“Losing Nadeem was a tragedy for all of us. The bullet that killed Nadeem did not just kill him, it killed me. It killed my wife. It killed my son and it killed my daughter. It took away happiness and laughter. After he died, I sold my business so that I could seek justice for Nadeem, and now I am spending my time away from my family, traveling and trying to educate people about his case. His life was ended, and his death began my search for justice.”