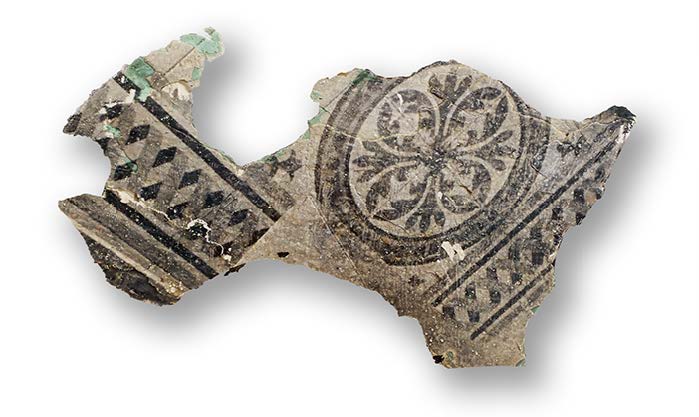 The Palestinian poet Mahmoud Darwish once said about the condition of exile, “Exile is more than a geographical concept. You can be an exile in your homeland, in your own house, in a room.” Darwish, who for many people stands out mainly as the spokesman of Palestinian exile and of the Palestinian cause, has put into words more eloquently than most the insecurity of our late-postmodern condition, where notions of belonging and connectedness are changing fast and might appear futile, and the search for an individual “being-in-the-world” is taking on an entirely new dimension.

The works of Steve Sabella reflect similar concerns. A native of Old Jerusalem, that evercontested piece of land whose privilege (or curse) it is to be holy to the three main monotheistic faiths, Sabella has been on a relentless journey since he left his home town through the fragments of his own psyche, to paraphrase a sentence by Mourid Barghouti. A journey that has led him to finally come to terms with his state of perpetual alienation and even find the liberation that rootlessness can also offer. Steve Sabella has now reached the point to which Vilém Flusser refers in the following words, “Emigrés become free, not when they deny their lost homeland, but when they come to terms with it.” 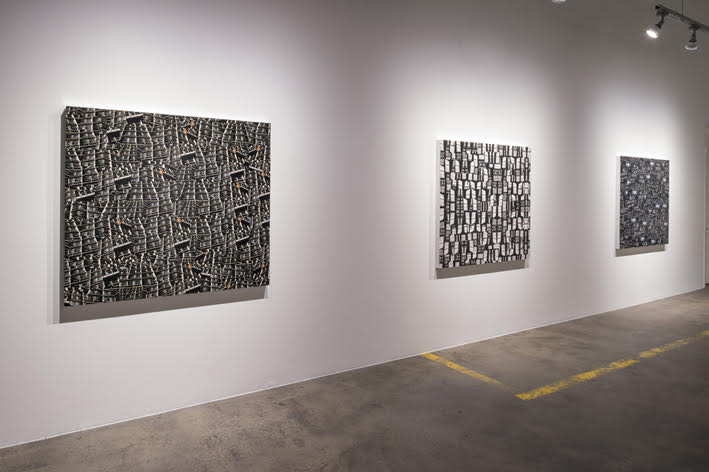 Steve Sabella, In Exile, installation shot from the View from the Inside group exhibition at the FotoFest Biennial, Houston, 2014, Lambda print on aluminium with 5-cm aluminium box edge, 136 x 125 cm. Image courtesy the artist.

Since the collages of In Exile (2008), a series created in London one year after having left his home town, Sabella has been using large scale photographic collages to reflect on this exilic state of mind. But even before physically leaving Jerusalem, his fellow Jerusalemite and artist, Kamal Boullata, saw traces of the anxiety of exile in Sabella’s work. The images in the series Identity (2002) which inspired Boullata’s remarks are taken in and around Jerusalem; however, they never show us the city as such, but rather fragments of the sky, rocks, fields and other open spaces. In this city, where space is so contested and every inch laden with symbolism, Sabella has sought out his own vision of his city, at once seeking an escape and a coming back, piecing together those fragments that offer a space to breathe, far from the confinements of man-made walls. 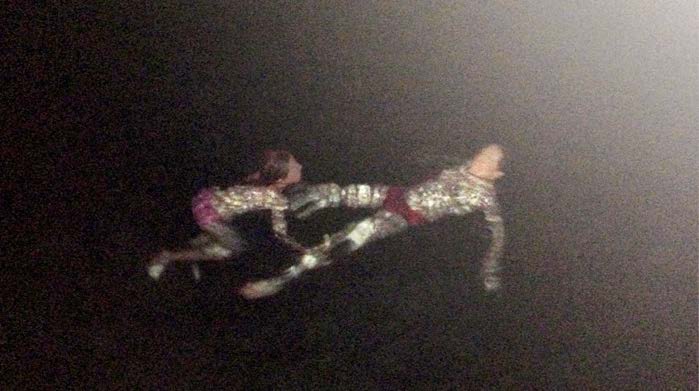 Following Steve Sabella’s path through his projects In Exile (2008), In Transition (2010), Euphoria (2010), Beyond Euphoria (2011), Metamorphosis (2012) and finally Independence (2013), the onlooker has access to a unique view of the psychological struggles the artist faced in his condition of up-rootedness. In each series except Independence, Sabella used a particular collage technique, piecing together fragmented photographic images taken from multiple perspectives. Sabella has likened this meticulous process, the careful re-arranging and twisting of forms, to painting rather than any classical use of photography. In many of these collages it is difficult to discern any clear directions; there seems to be no clear up or down. When drawn into these images, one finds oneself caught in a dizzying, free-floating condition, disturbing at first, but maybe also offering the promise of endless freedom, to be found somewhere, sometime. In this cycle of works Euphoria might be understood as representing a climax. After foregrounding the destructive aspect of uprootedness in In Exile, Euphoria presents a reflection on the liberating feeling that comes with shedding one’s mental chains. Through the metaphor of uprooted trees, arranged in whirls, Sabella offers a powerful visualization of this short-lived emotional condition. The individual parts of the collage seem to fit effortlessly together, bearing certain resemblances to the work of M.C. Escher, as well as the ornamental principles of classical Islamic art. However, on second glance, one discerns fissures in the smoothness. Like cracks in a broken mirror, the montage of the image becomes clear, pointing towards a mental process that has not yet been accomplished and that leads to the subsequent series, ending with the project Independence, realized in 2013, in which we see complete, floating human bodies, possibly a sign that the artist has healed his mental wounds and sees himself as complete. It is a breaking free of all bonds that now allows the artist to embark on new quests. 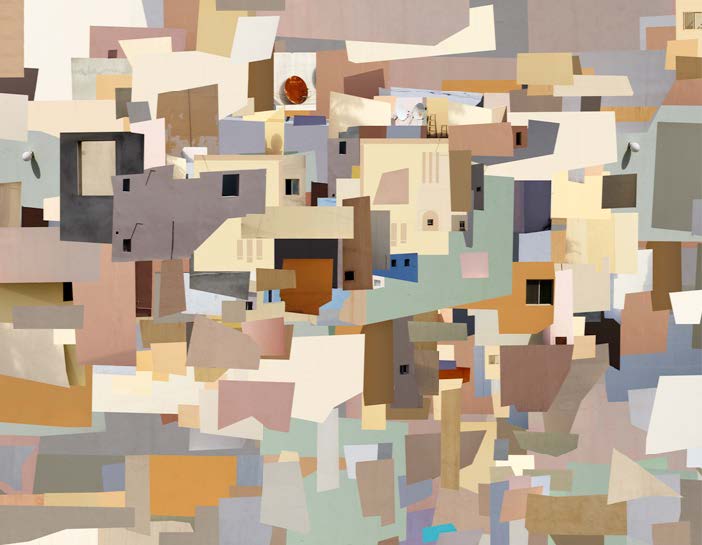 2013 brought another change to Steve Sabella’s work. A visit to Bahrain to realize a work commissioned by the National Museum of Bahrain served as the spark for him to engage with his visual environment in a novel way. The new territory, hitherto only known by him through information that had gone through several layers of filters and not through personal engagement, asked for a different approach than those of Sabella’s former projects - an approach that led to the investigation of the visual components of the world that is at the basis of the artist’s current concerns. The resulting project Sinopia (2014) is markedly different from the earlier works; it abounds with a multitude of colors and forms, isolated individual components of images, abstract forms taken from the walls of houses as well as familiar sights such as satellite dishes, a kaleidoscope of the stunning landscapes and city views of Bahrain.

This new way of carefully dissecting the image appears almost surgical, and is in Sabella’s own words a reaction to what he calls people’s, “obsession with trying to rationalize photography’s indexical relationship to reality.” Steve Sabella seems to ask us to go further than this and investigate the photographic medium as the relationship between the image and the reality it creates, rather than reality as it purportedly depicts. This conceptual approach stands out even more in his latest work, the series 38 days of re-collection. Here, Sabella takes this notion back to his original point of departure, his home town of Jerusalem. For 38 days he subleased and lived in a house that has been occupied by Israelis since 1948, carefully examining every object in the house and taking numerous photographs in an effort to try to understand the space and its history. The disturbing feelings he felt during this experiment led the artist to return to the houses of the Old City, among them the house he was born in. Here he collected fragile fragments of painted wall plaster onto which he applied light sensitive black and white photo emulsion and printed images taken in the occupied house. The ensuing series of works, resulting as the title states from “38 days of re-collection,” is a highly complex project that digs deep into questions of place and history, as well as our understanding and visualization of it. The images of contemporary reality, the reality of an occupied house and the Palestinian artist’s photos of it that bore witness to his temporary re-occupation, overlap the fragile fragments of plaster, those silent testimonies of a history dating back many centuries that are so often left to oblivion. 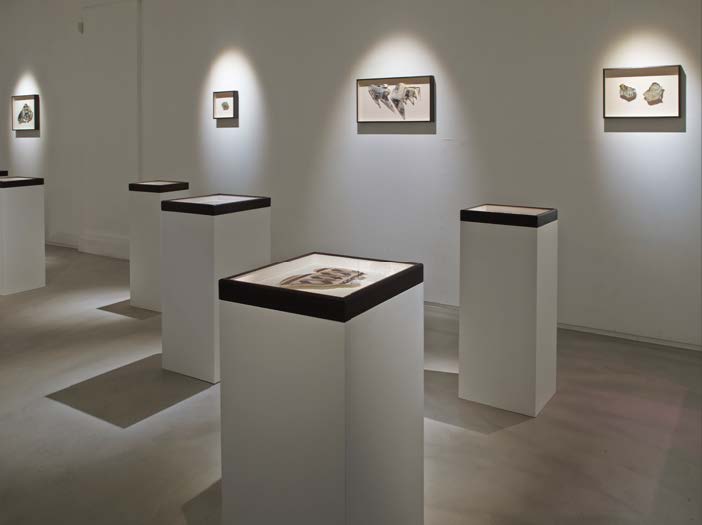 Where he was engaged in his earlier works in what one might term “archaeology of the psyche,” a search for a way to visualize mental states of mind through photography, Sabella’s new work goes further in its relation to archaeology as a practice that aims at re-creating an image of the past. The re-worked fragments, each of them exhibited in a frame under glass like a precious ancient object, have a peculiarly unsettling effect on the viewer because they appear as something else than what they are. At first glance they look like archaeological artifacts, but instead of presenting the image of a distant past, they offer glimpses of a contemporary materiality, of seemingly banal everyday objects, each of which representing the questionable effort to re-write the history of a space, of eliminating a history through a forceful re-inscription. Instead of offering information, these objects asks questions.

One might see 38 days of re-collection as the completion of a circle. Jerusalem, the city of Steve Sabella’s birth and upbringing, the city he sought to re-think in the early project Identity, this over-inscribed piece of land that seems to have haunted the artist for so long, now appears in the light of Sabella’s new image-research. Coming to terms with his uprootedness and “growing roots in the air” as he himself says, has enabled the artist to return to his native city with an approach that is at once disinterested, almost scientific in the dissection of its visual elements, and at the same time highly personal in its concern with the small objects of everyday use. Through his investigation of the visual palimpsest that is the history of Jerusalem and the everincreasing layers of images created and imagined about the city, Steve Sabella has succeeded in asking one essential question. Is the relationship between image and reality relevant? It might in fact be more important to start looking at the relationship between images among each other and between images and the reality they seem to create.


Charlotte Bank is an art historian and independent curator, living and working between Berlin and Geneva. She publishes regularly in both on- and offline journals. Her work is focused on modern and contemporary artistic practice from the Middle East with a special emphasis on the independent contemporary art scene since 2000 in its global context.