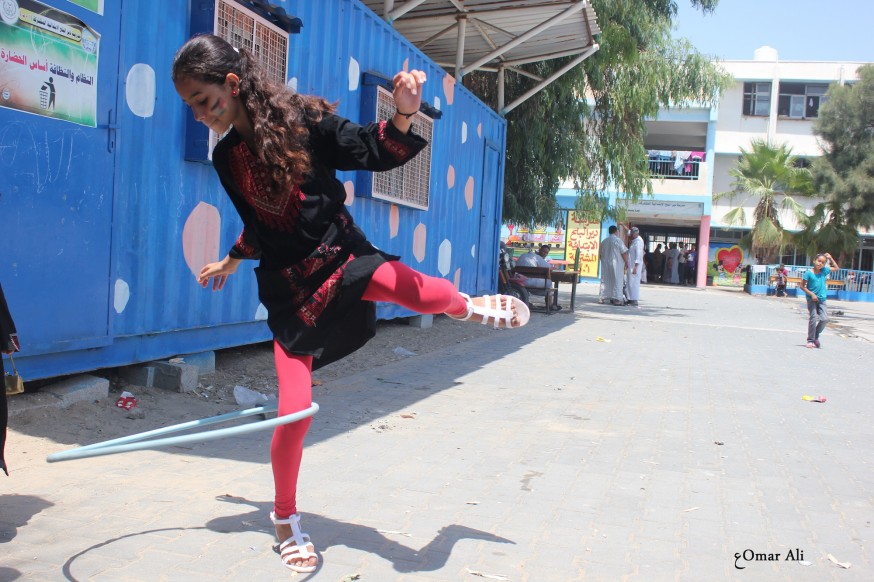 Writer's note: I met Reham in a UN school-turned-emergency-shelter during Israel's 2014 attacks on Gaza, where I volunteered with the UN Population Fund. She made an impression I will never forget.

Before the war started, Reham loved her mornings. The sun shone its beams on the eastern side of Reham's room, where she slept. Fifteen years old at the time, Reham lived in Al-Maghazi camp in the middle of Gaza. She had long brown hair; round, black eyes; and a pretty smile. She awakened when the sun's rays filtered through the trees. Reham would typically rub her eyes, look at the ceiling for a few minutes and try to recognize the new day. She liked Sundays; it was the day when she took her drawing class. Her favorite color was black because she believed it was the "master" of colors. After washing her face, brushing her teeth and putting on her school uniform, she ate breakfast with her sisters and mother. She had three sisters: Diana, Ahlam and Rana; no brothers. Reham loved her mother's cheese sandwiches, but she preferred her cookies more.

Reham considered school her second home. She was a clever girl, active and talented. (Coincidentally, Reham and I like the same subject — English —yet she wants to become an engineer). In the last semester, she had earned a 95.4 percent score in school and she was very proud, especially when her parents attended the honor ceremony. Reham was very involved in school activities, particularly in art and dabka (traditional Palestinian dancing).

"I express my feelings by drawing," she says. Reham helped paint murals on the school's walls. "My friends and my schoolmistress loved my work."

Reham was passionate about playing video games and practicing dabka with her close friend Aya. On Fridays, they met at Aya's house. Aya and Reham were best friends; they ate, played and studied together. They usually played until Reham's mother came to take her home after a long, arduous day working in a clothing shop.

One of Reham's favorite places was the sea. She loved building models of the Al-Aqsa Mosque in the sand, even though large waves sometimes destroyed them. She also liked swimming, as her parents hovered nearby in concern.

"The sea keeps my secrets," she tells me.

"When it comes, it brings with it a smell, a fragrance even. You learn to recognize it as a kid growing up in these narrow streets… You don't mistake it. حرب. Harb. War."

—Atef Abu Saif (Palestinian writer living in Gaza, from his 2014 war diary, "The Drone Eats With Me")

That summer, the third Israeli assault on Gaza began. It was a hot day when Reham returned home after a long day at school. She was happy because her mother had prepared her favorite meal, maftool (traditional Palestinian food made of flour, semolina, onion, warm water and spices).

Around 1:30 p.m. , Israeli aircraft started targeting some locations in Al-Maghazi camp. Reham was so afraid; her brain flashed to previous assaults.

"I thought I was in dream," she says.

When the sound of bombs got closer and closer to her house, she screamed and burst into tears. Involuntarily, her mother embraced her, trying to keep her safe and calm. When we feel pain, panic and weakness, we want to be protected by our mothers, exactly as Reham did.

As the days went by with no let-up in the fighting, Reham's emotional state deteriorated. She started experiencing wrenching nightmares. One night, she dreamt she saw her sisters' bodies in the rubble of their destroyed house.

Reham began to wet the bed at night, which embarrassed her intensely. She would wake up in a wet bed, take a shower and put on dry clothes. Her personality dramatically changed; she became overwhelmed and withdrawn. Reham couldn't even paint to express her feelings as she used to do.

A few days later, on a Monday morning, Israeli aircraft and tanks started randomly targeting Reham's neighborhood. Reham's parents were terrified and worried for their children's lives. So, they decided to evacuate the house, heading to a UN shelters in Dier Al-Balah, southwest of Al-Magazi.

When Reham and her family sought refuge in the UNRWA school, she longed for her home. She remembered how she used to love to wake up in the early morning for the first prayer of the day, then watch her mother breastfeed her younger sister while her father's eyes sparkled in the dark.

During these moments of longing, the flashbacks sapped all of her emotions, except for the tears that would drip down her cheeks. The green chalkboard in the classroom of the UN school were they were staying was like a face with empty eyes staring at her. She picked up a piece of chalk and started to draw, attempting to pretend like this building was her new home. She wanted so badly to return to her painting club in her old school. Reham used to love painting birds, the sea, anything outside. But now it was different.

She grabbed her teddy bear and walked outside, looking for relief. There, outside the classroom, a man with a lighter and his last cigarette stood, leaning his elbows against a low wall. He was the guard at the shelter.

The guard lit his cigarette and looked up at the sky with a frown on his pale face. "I was terrified, Hamza."

The man said to her, "you should not be here, go to your house and sleep."

Reham went back to class and tried to sleep with nearly 30 other people in the same room.

I loved my volunteer work, but I was drawn particularly to Reham. Why? Maybe because I found something common between us; both of us like drawing, coloring and English. But it also was because of the beautiful soul I sensed inside. We became true friends. She grew sad when I had to go home after visiting with her. She always wanted to visit me and I really wanted to take her home with me. I wanted to protect her a little bit from the miserable life at the shelter. But, she belongs to her family. She belongs to those who lost everything in a matter of seconds.

After more than 50 days of war, a truce was declared. It was time now to say goodbye to every single one of Reham's family because my job was done there. To me, saying goodbye has always seemed so final. Life is crazy. People come and go; in Gaza, one begins to feel like no relationship is sustainable. The next war always seems around the corner. It's why I had to say goodbye.

I had tears behind my smile when I went to say goodbye to her. I felt chills when I hugged her for the last time. I didn't want her to feel my quick heartbeat. I walked away, feeling guilty that I was hurting her by leaving.

Postscript: When I first went to work in the UNRWA shelters as a nursing student, I never thought I would attempt to make such relationships. I thought I would only provide first aid, lead recreational activities for children and coordinate health education for families.

But my relationship with Reham broke my rules. Ten months later, we met each other again. She is still beautiful, active and clever.

She looks like she is doing okay from the outside, but it's hard to tell if she is doing well on the inside. I felt that something has changed in her character. She spoke with something hiding behind her smile. I couldn't understand what it was. Then I realized what I saw — it was a stubborn determination to live.

"We love life." Reham was always saying this.

Hamza Moghari is a writer in the We Are Not Numbers project.