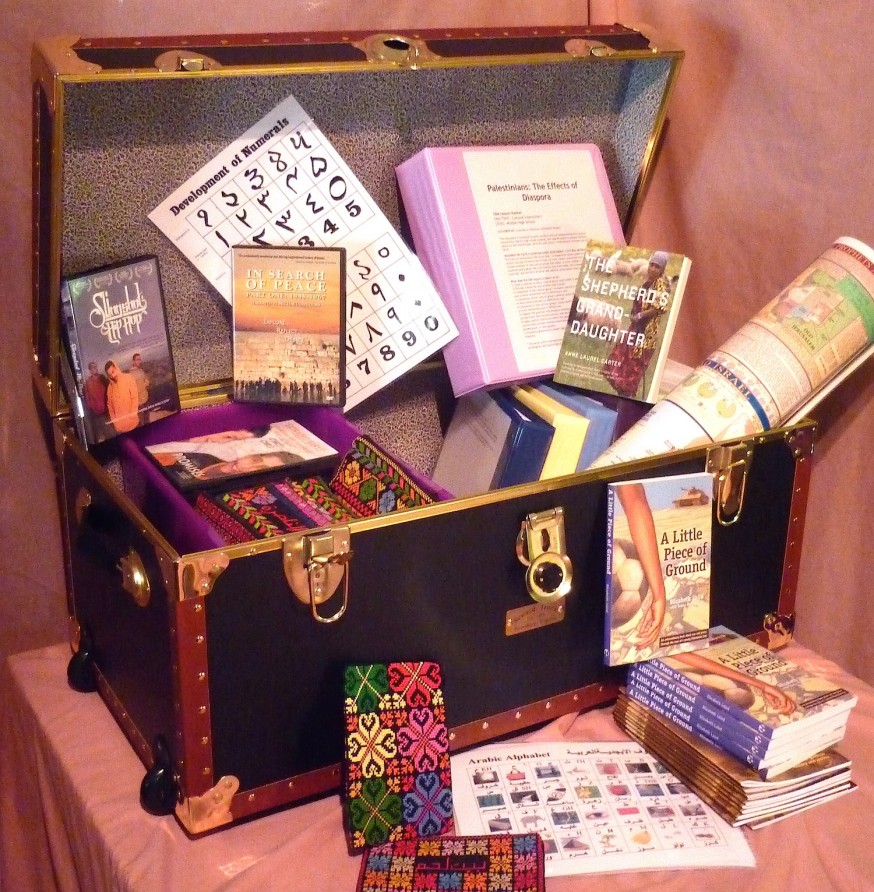 When Linda Bevis started her second career in teaching nineteen years ago, she noticed that the textbooks for high school world history dedicated about five paragraphs to Palestine and Israel. The Seattle resident, educator, and longtime activist knew how difficult it would be for any teacher to use that material productively. “While I actually don’t think the conflict is a complicated one, it cannot be explained in five paragraphs. I wouldn’t want to teach it via the textbook, and teachers don’t have time to develop new lesson plans for each topic,” says Bevis. “Then later in my career I was using the Holocaust Teaching Trunk, and I thought, ‘Palestine should have something like this.’”

So Bevis, who has a JD and a Master’s in Education from the University of Washington, went about assembling one. It took her three years to piece together the materials; she took the time to consider state education standards, how other educators were teaching the conflict, and different methods of learning. The result is the Palestine Teaching Trunk, which is both a physical trunk filled with teaching materials (free and for use in the greater Seattle area), and a free online curriculum that can be used from anywhere.

The physical trunk — which at first glance looks like it might be filled with gold doubloons — offers teachers a wide spectrum of choices for teaching about Palestine and Israel. Inside are games, articles, maps, magazines, artwork, two-sides-to-the-conflict lessons, pro-and-con articles, debates as to whether or not the term “apartheid” applies to Israel, movies with study guides, lectures, readings, writing prompts, role plays, and human rights lesson plans that delve into the ethics of occupation. But most important to Bevis, there’s room in the trunk for critical thinking.

“High school kids are very suspicious by nature. If an adult says Palestinians are living under occupation, they will want to know what occupation is, and then they’ll want to hear other perspectives. So the trunk can expose students to a common Palestinian narrative, and a common Israeli narrative,” says Bevis. “Teachers are educated people and critical thinkers, so I trust them to pick and choose and decide how they want to use the material.”

For Bevis, bringing a more nuanced view of Palestine is personal. Her family moved to Lebanon when she was four for her father’s position at AUB, and she calls Beirut the “first home I remember.” Even as a child, the injustices visited upon the Palestinians, particularly those living in the Sabra and Shatila refugee camps Bevis passed on her way to the airport, were striking to her.

Years later while working as a corporate lawyer as an adult, the first intifada began and Bevis felt the urge to switch tracks. She began reaching out to Palestinian and Israeli human rights agencies to offer her services, and ended up spending two years working for Al-Haq in Ramallah as a human rights lawyer. When she came back, she became active in her local Palestine Solidarity Committee, got involved with the International Solidarity Movement, and also co-founded the Palestine Information Project with several others, including her husband Edward Mast. The latter group offers resources like the “Palestine for Beginners” video series, all of which is available on YouTube.

Bevis is now focused on her mission to give young Americans the body of information they need to think critically about Palestine, and hopes to shift the status quo using tools like the teaching trunk. Despite some criticism the trunk has gotten from groups like StandWithUs, it’s been endorsed by groups like Jewish Voice for Peace Seattle, and she’s gotten positive feedback from teachers and students alike. “I am very impressed by the depth, detail and richness of this resource,” says a Seattle area social studies teacher. “Great care has been taken to offer materials and activities that help students use critical thinking skills to analyze this very complex historical dilemma.”

“The trunk should not be viewed as a divisive tool,” adds Bevis. “It’s for anyone who cares about human rights.” In fact, the trunk starts a broader conversation about human rights through history and around the world, she argues, and the earlier American students are exposed to this sort of content, the better.

“A lot of people find out about Palestine and Israel in college, and the ones who find out about it in high school are just better prepared,” Bevis says. “It’s a way to teach about so many other things. Studying Arab and Palestinian culture can combat Islamophobia, for example. If we’re talking about South Africa, or the civil rights movement here, students will see that there are people in many places fighting for those rights. It’s about making connections among human beings all over the world.”