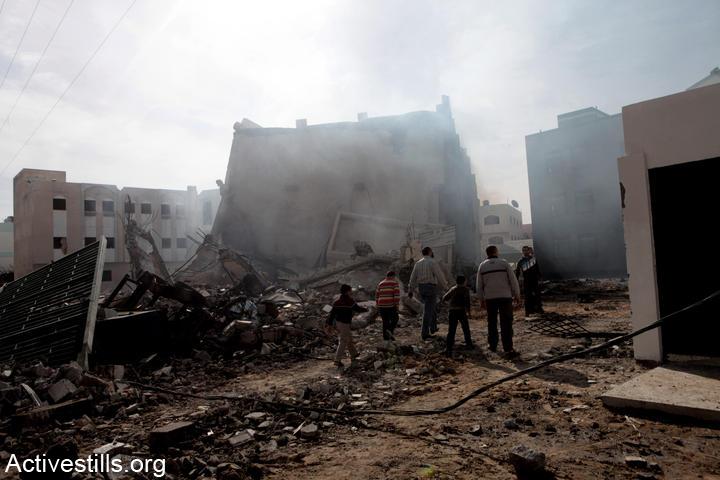 Since Israel's creation in 1948, Israeli political and military leaders have demonstrated a pattern of repeatedly violating ceasefires with their enemies in order to gain military advantage, for territorial aggrandizement, or to provoke their opponents into carrying out acts of violence that Israel can then exploit politically and/or use to justify military operations already planned.

The following fact sheet provides a brief overview of some of the most high profile and consequential ceasefire violations committed by the Israeli military over the past six decades.

2012 - On November 14, two days after Palestinian factions in Gaza agree to a truce following several days of violence, Israel assassinates the leader of Hamas' military wing, Ahmed Jabari, threatening to escalate the violence once again after a week in which at least six Palestinian civilians are killed and dozens more wounded in Israeli attacks.

2012 - On March 9, Israel violates an Egyptian-brokered ceasefire and assassinates the head of the Gaza-based Popular Resistance Committees, sparking another round of violence in which at least two dozen Palestinians are killed, including at least four civilians, and scores more wounded. As usual, Israel claims it is acting in self-defense, against an imminent attack being planned by the PRC, while providing no evidence to substantiate the allegation. Following the assassination, Israeli journalist Zvi Bar'el writes in the Haaretz newspaper:

"It is hard to understand what basis there is for the assertion that Israel is not striving to escalate the situation. One could assume that an armed response by the Popular Resistance Committees or Islamic Jihad to Israel's targeted assassination was taken into account. But did anyone weigh the possibility that the violent reaction could lead to a greater number of Israeli casualties than any terrorist attack that Zuhair al-Qaisi, the secretary-general of the Popular Resistance Committees, could have carried out? "In the absence of a clear answer to that question, one may assume that those who decided to assassinate al-Qaisi once again relied on the 'measured response' strategy, in which an Israeli strike draws a reaction, which draws an Israeli counter-reaction."

Just over two months prior, on the third anniversary of Operation Cast Lead, Israeli army Chief of Staff Lt. Gen. Benny Gantz tells Israel's Army Radio that Israel will need to attack Gaza again soon to restore its power of "deterrence," and that the assault must be "swift and painful," concluding, "We will act when the conditions are right."

2011 - On October 29, Israel breaks a truce that has maintained calm for two months, killing five Islamic Jihad members in Gaza, including a senior commander. The following day, Egypt brokers another truce that Israel proceeds to immediately violate, killing another four IJ members. In the violence, a total of nine Palestinians and one Israeli are killed.

2008 - In November, Israel violates a ceasefire with Hamas and other Gaza-based militant groups that has been in place since June, launching an operation that kills six Hamas members. Militant groups respond by launching rockets into southern Israel, which Israel shortly thereafter uses to justify Operation Cast Lead, its devastating military assault on Gaza beginning on December 27. Over the next three weeks, the Israeli military kills approximately 1400 Palestinians, most of them civilians, including more than 300 children. A UN Human Rights Council Fact Finding Mission led by South African jurist Richard Goldstone subsequently concludes that both Israel and Hamas had committed war crimes and crimes against humanity during the fighting, a judgment shared by human rights organizations such as Amnesty International and Human Rights Watch.

2002 - On July 23, hours before a widely reported ceasefire declared by Hamas and other Palestinian groups is scheduled to come into effect, Israel bombs an apartment building in the middle of the night in the densely populated Gaza Strip in order to assassinate Hamas leader Salah Shehada. Fourteen civilians, including nine children, are also killed in the attack, and 50 others wounded, leading to a scuttling of the ceasefire and a continuation of violence.

2002 - On January 14, Israel assassinates Raed Karmi, a militant leader in the Fatah party, following a ceasefire agreed to by all Palestinian militant groups the previous month, leading to its cancellation. Later in January, the first suicide bombing by the Fatah linked Al-Aqsa Martyr's Brigade takes place.

2001 - On November 23, Israel assassinates senior Hamas militant, Mahmoud Abu Hanoud. At the time, Hamas was adhering to an agreement made with PLO head Yasser Arafat not to attack targets inside of Israel. Following the killing, respected Israeli military correspondent of the right-leaning Yediot Ahronot newspaper, Alex Fishman, writes in a front-page story: "We again find ourselves preparing with dread for a new mass terrorist attack within the Green Line [Israel's pre-1967 border]... Whoever gave a green light to this act of liquidation knew full well that he is thereby shattering in one blow the gentleman's agreement between Hamas and the Palestinian Authority; under that agreement, Hamas was to avoid in the near future suicide bombings inside the Green Line..." A week later, Hamas responds with bombings in Jerusalem and Haifa.

2001 - On July 25, as Israeli and Palestinian Authority security officials meet to shore up a six-week-old ceasefire, Israel assassinates a senior Hamas member in Nablus. Nine days later, Hamas responds with a suicide bombing in a Jerusalem pizzeria.

1988 - In April, Israel assassinates senior PLO leader Khalil al-Wazir in Tunisia, even as the Reagan administration is trying to organize an international conference to broker peace between Israelis and Palestinians. The US State Department condemns the murder as an "act of political assassination." In ensuing protests in the occupied territories, a further seven Palestinians are gunned down by Israeli forces.

1982 - Following Israel's invasion of Lebanon in June, and after PLO fighters depart Beirut under the terms of a US-brokered ceasefire, Israel violates the terms of the agreement and moves its armed forces into the western part of the city, where the Palestinian refugee camps of Sabra and Shatila are located. Shortly thereafter, Israeli soldiers surround the camps and send in their local Christian Phalangist allies - even though the long and bloody history between Palestinians and Phalangists in Lebanon is well known to the Israelis, and despite the fact that the Phalangists' leader, Bashir Gemayel, has just been assassinated and Palestinians are rumored (incorrectly) to be responsible. Over the next three days, between 800 and 3500 Palestinian refugees, mostly women and children left behind by the PLO fighters, are butchered by the Phalangists as Israeli soldiers look on. In the wake of the massacre, an Israeli commission of inquiry, the Kahan Commission, deems that Israeli Defense Minister (and future Prime Minister) Ariel Sharon bears "personal responsibility" for the slaughter.

1981-2 - Under Defense Minister Ariel Sharon, Israel repeatedly violates a nine-month-old UN-brokered ceasefire with the PLO in Lebanon in an effort to provoke a response that will justify a large-scale invasion of the country that Sharon has been long planning. When PLO restraint fails to provide Sharon with an adequate pretext, he uses the attempted assassination of Israel's ambassador to England to justify a massive invasion aimed at destroying the PLO - despite the fact that Israeli intelligence officials believe the PLO has nothing to do with the assassination attempt. In the ensuing invasion, more than 17,000 Lebanese are killed.

1973 - Following a ceasefire agreement arranged by the US and the Soviet Union to end the Yom Kippur War, Israel violates the agreement with a "green light" from US Secretary of State Henry Kissinger. According to declassified US documents, Kissinger tells the Israelis they can take a "slightly longer" time to adhere to the truce. As a result, Israel launches an attack and surrounds the Egyptian Third Army, causing a major diplomatic crisis between the US and Soviets that pushes the two superpowers to the brink of nuclear war, with the Soviets threatening to intervene to save their Egyptian allies and the US issuing a Defcon III nuclear alert.

1967 - Israel violates the 1949 Armistice Agreement, launching a surprise attack against Egypt and Syria. Despite claims Israel is acting in self-defense against an impending attack from Egypt, Israeli leaders are well aware that Egypt poses no serious threat. Yitzhak Rabin, Chief of the General Staff of the Israeli army during the war, says in a 1968 interview that "I do not believe that Nasser wanted war. The two divisions he sent into Sinai on May 14 would not have been enough to unleash an offensive against Israel. He knew it and we knew it." And former Prime Minister Menachem Begin later admits that "Egyptian army concentrations in the Sinai approaches did not prove that Nasser was really about to attack us. We must be honest with ourselves. We decided to attack him."

1956 - Colluding with Britain and France, Israel violates the 1949 Armistice Agreement by invading Egypt and occupying the Sinai Peninsula. Israel only agrees to withdraw following pressure from US President Dwight Eisenhower.

1949 - Immediately after the UN-brokered Armistice Agreement between Israel and its neighbors goes into effect, the armed forces of the newly-created Israeli state begin violating the truce with encroachments into designated demilitarized zones and military attacks that claim numerous civilian casualties.