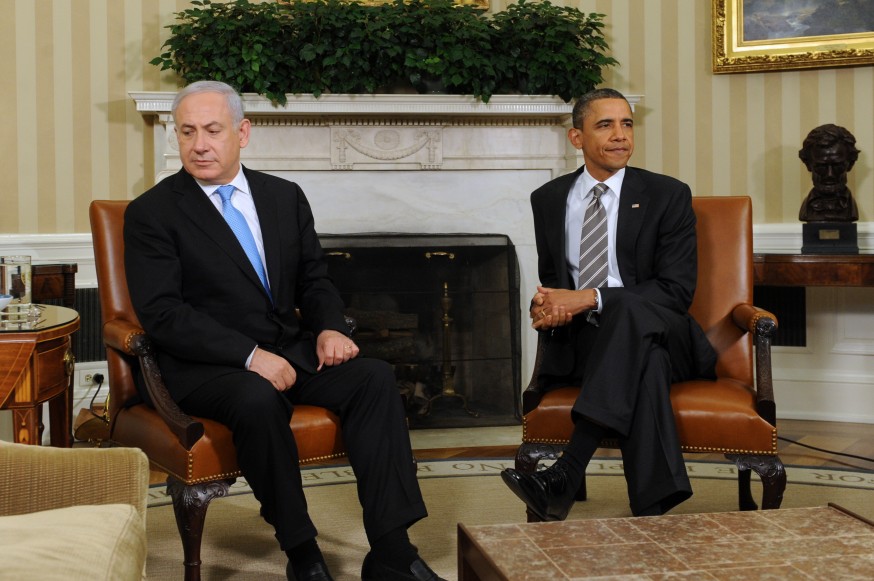 PHOTO: US President Barack Obama and Prime Minister of Israel Benjamin Netanyahu meet in the Oval Office of the White House in Washington DC, USA, on May 20, 2011. (Michael Reynolds/EPA)

In recent weeks, the troubled relationship between the administration of U.S. President Barack Obama and the government of Israeli Prime Minister Benjamin Netanyahu has once again been making headlines, following several announcements for new Israeli settlement construction on occupied Palestinian land.

Prime Minister Netanyahu’s disregard for American policy on settlement construction and strained ties with the United States are nothing new. During his first term as prime minister (1996-1999), Netanyahu had a similarly difficult relationship with President Bill Clinton, who following their first meeting exclaimed, "Who the f-ck does he think he is? Who's the f-cking superpower here?" In 1989, Secretary of State James Baker had Netanyahu, then a senior foreign policy official in the government of Yitzhak Shamir, banned from the State Department after he made disparaging comments about President George H. W. Bush.

1. During an official visit to the White House in May 2011, Prime Minister Netanyahu lectures President Obama during comments to the press after a meeting in the Oval Office in a move that’s widely seen as a diplomatic slap in the face.

2. In March 2010, the Israeli government announces plans for construction of 1600 new settlement units in occupied East Jerusalem as Vice President Joe Biden arrives for an official visit, despite the fact that the Obama administration has been pressuring Israel to implement a settlement freeze to facilitate the resumption of peace talks with the Palestinians. In response, Secretary of State Hillary Clinton condemns the timing of the announcement as "insulting" to the United States.

4. In response to a U.S. ceasefire proposal to end Israel’s assault on Gaza in July 2014, senior Israeli officials accuse Secretary of State John Kerry of carrying out a “strategic terrorist attack” against Israel.

5. After President Obama takes office in 2009, Israel refuses U.S. requests for a freeze on construction in Jewish settlements on occupied Palestinian land, which violate both international law and official U.S. government policy going back decades, as part of an effort to restart peace talks. Prime Minister Netanyahu’s government eventually agrees to a 10-month partial building slowdown, but it contains so many loopholes as to render it meaningless.

6. On July 17, 2014, a day after President Obama warns of further civilian casualties and calls for a de-escalation in violence following weeks of mounting Israeli repression in the West Bank and air attacks on Gaza, Israel launches a massive ground invasion of the Gaza Strip, which kills approximately 1400 Palestinian civilians over the next several weeks. During the assault, Israeli forces repeatedly attack UN facilities where displaced Palestinians are sheltering, killing and wounding hundreds of civilians, despite pointed calls from the White House demanding Israel take all possible precautions to avoid civilian casualties.

7. In January 2014, Israeli Defense Minister Moshe Yaalon accuses Secretary of State Kerry of being motivated by a “misplaced obsession and messianic fervor” in his push for peace between Israelis and Palestinians, adding that Kerry “cannot teach me anything about the conflict with the Palestinians." According to other media reports, Yaalon had been badmouthing Kerry to reporters and diplomats for weeks.

8. In October 2014, following criticism from the White House over settlement construction in occupied East Jerusalem, Prime Minister Netanyahu tells an American interviewer that such criticism goes “against American values."

9. In February 2014, a meeting between the U.S. ambassador to Israel, Daniel Shapiro, and a group of right-wing parliamentarians from Israel’s coalition government intended to improve relations with the Obama administration turns ugly, with the legislators accusing the U.S. of failing to support Israel strongly enough. Yariv Levin, chairman of Israel’s coalition government and a member of Prime Minister Netanyahu’s Likud party, tells Shapiro that the U.S. should support Israel unconditionally, stating: "We see our alliance with you as unconditional. When there is a true alliance, it is proved by you standing behind us, even when you think we're wrong,” while Deputy Speaker of the Knesset Moshe Feiglin, also from Netanyahu’s Likud party, claims that the refusal of the Obama administration to release Jonathan Pollard, a U.S citizen sentenced to life in prison in 1986 for spying for Israel, "reeked of anti-Semitism."

10. In February 2014, following warnings from Secretary of State Kerry that Israel is becoming isolated internationally and vulnerable to the global Boycott, Divestment and Sanctions (BDS) movement, Deputy Minister of Transportation Tzipi Hotovely, from Netanyahu's Likud party, blasts Kerry, claiming his “unprecedented threats of a boycott are an attempt to terrorize Israel.”