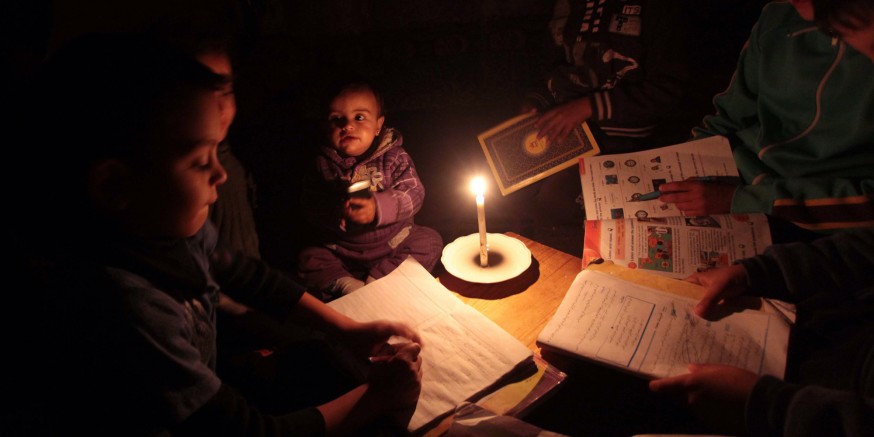 Palestinian children do their school work by candle light due to electricity shortages in Gaza. PHOTO: Ashraf Amra/Anadolu Agency/Getty Images

The immediate cause of the current crisis in Gaza is the West Bank-based Palestinian Authority’s efforts to pressure its rival Hamas and to curry favor with the Trump administration. However, the appalling conditions that the nearly 2 million Palestinians in Gaza are forced to endure are ultimately the result of 50 years of Israeli military rule over the tiny coastal enclave and a cruel and illegal siege and naval blockade that Israel has imposed since 2007, an act of collective punishment that amounts to a war crime. (Although Israel withdrew some 8,000 illegal settlers in 2005, it continues to militarily occupy Gaza according to international law because it maintains control over virtually all entry and exit from Gaza as well as its coastline and airspace.)

“Already before these current cuts, residents of Gaza received four hours of supply followed by 12 hours of blackouts; water desalination and sewage treatment facilities are not operational; some 100 million liters of untreated or partially treated sewage are being dumped mostly at sea daily; generators are over-extended; entire hospital wards are shut down during blackouts, and people who rely on life-saving equipment are at risk.”