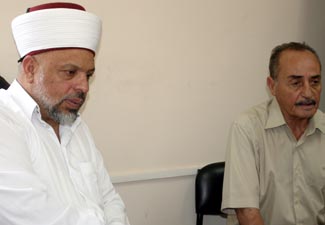 The basic structure of the court system of the Palestinian territories was established in the 19th century when the Turkish Ottoman Empire created a new secular court system - part of a series of modernizing reforms called the Tanzimat. The court structure and the substantive and procedural laws they applied were heavily influenced by the code-based civil law systems of Continental Europe. They included magistrate courts (for petty criminal and civil disputes), district courts, and appellate courts.

The jurisdiction of Islamic law (shari'a) and Christian ecclesiastical courts (of which there were several, one for each major denomination) was thereafter limited to family law (marriage, divorce, adoption, child custody, inheritance) for their respective communities.

Through many changes in ruling authority - Ottoman, British, Jordanian (for the West Bank), Egyptian (for the Gaza Strip), Israeli, and now Palestinian Authority - this basic court configuration has persisted. There have been many changes, however, in the substantive and procedural laws applied by these courts.

The Palestinian Authority has added new courts, called State Security Courts, to try cases involving claimed threats to national security. It has also convened military courts to try offenses committed by members of the security forces in the performance of their duties. Both systems have been strongly criticized for procedures that fall below international standards of fairness for defendants.

Since the al-Aqsa Intifada began in 2000, the Palestinian courts have been almost inoperative, due to inaccessibility for employees and litigants, physical damage to facilities, and a broadening disrespect for PA institutions. Palestinians resorted instead to al-qada' al-'asha'iri (tribal adjudication) to resolve their disputes.

Photo: President of the Higher Council for the Jurisdiction of Sharia, Sheikh Tayseer Al-Tamimi (left), meets with the Tulkarm Guardian. (Maan Images)