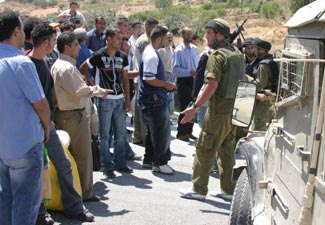 Unemployment peaked at around 60% in 2003, mainly as a consequence of Israeli checkpoints, closures, and other restrictions on Palestinians' freedom of movement.  Circumstances have improved somewhat, with unemployment standing at 27% in the West Bank and 39% in the Gaza Strip in 2006, though Israel's suspension of tax revenue transfers to the PA and the international boycott of the Hamas-led government have begun to adversely affect these gains.  This, in combination with Israel's policy of closure in Gaza following the disengagement, have led to a rise in unemployment and increasing poverty in the Occupied Territories.  According to the World Bank, if the current conditions persist, by 2008 unemployment rates could reach 47%, with poverty rates growing to between 70 and 75%.  As it stands, 44% of Palestinians living in the West Bank currently live beneath the poverty line, defined as having an income of $3.10 per day, while the figure for those in Gaza is nearly 60%.