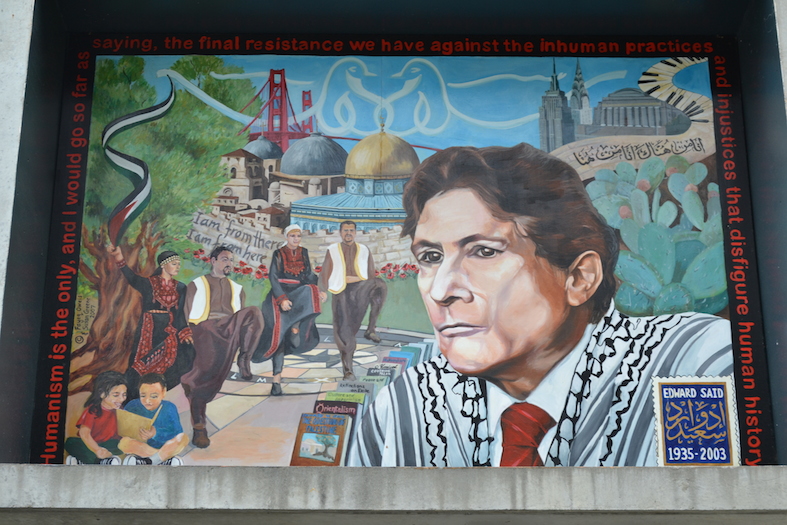 Mahmoud Darwish is perhaps the most lauded contemporary poet in the Arab world, renowned for his lyrical evocations of love for his lost country. He grew up in Israel as an "internal refugee" (one whose home or lands were taken or destroyed in 1948, but remained in Israel), but left permanently in 1971. He later assumed various posts with the Palestine Liberation Organization (PLO) cultural departments, but resigned in 1993 following the Oslo Accords. His works have been translated into many languages, including English, and have also been put to music by popular Lebanese composer/musician Marcel Khalifeh and others.

Edward Said (1935-2003) was a professor of comparative literature at Columbia University, and one of the most important intellectuals of the late twentieth century. His 1978 book Orientalism revolutionized the way Western scholars analyzed the East, and spawned the field of post-colonial studies. He was an outspoken advocate of Palestinian rights, and a critic, in his later years, of the Oslo Accords and the PLO leadership.

Ibrahim Fawal, an assistant director for the acclaimed Lawrence of Arabia, and now a professor of film and literature at the University of Alabama in Birmingham, authored a fascinating novel in English entitled On the Hills of God. The book depicts life in a Palestinian town in the last year before the Nakba (or Catastrophe, as the Palestinians refer to the simultaneous creation of the state of Israel and exile of hundreds of thousands of Palestinians). It is based on the author's actual lived experience, and on extensive historical research.

Suad Amiry is an architect residing in Ramallah, and the founder of the Riwaq Center for Architectural Conservation. Her book Sharon and My Mother-in-Law: Ramallah Diaries is a funny yet poignant chronicle of life under occupation. It includes a diary of her days under curfew in 2002 trapped in her home with her mother-in-law. The book has been sold to publishers in eleven countries, and received Italy's Viareggio-Versilia Prize in 2004.