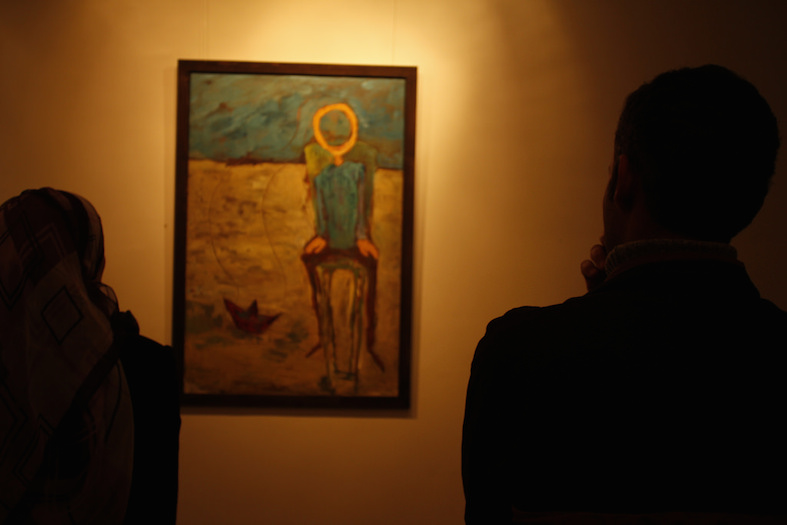 Abed Abdi, a sculptor and muralist, was born in Haifa, Palestine, in 1942, and still resides in that city. He belongs to the generation of post-1948 pioneering visual artists within the Palestinian community in Israel. He held his first exhibit in Tel Aviv in 1962, and graduated from the Dresden Academy of Fine Arts in 1972. After his graduation he worked as a graphic designer for a number of Arabic language publications.

Kamal Boullata was born in 1942 in Jerusalem, Palestine, and graduated from the Rome Fine Arts Academy and from the Corcoran Museum's College of Art and Design. Boullata works mainly in silk screen. His compositions are based on Arabic calligraphy, which he uses as a representational form of art. He has also authored or edited a number of works on art and poetry. He now works and resides in Menton, France.

Vera Tamari. Born in Jerusalem, Palestine in 1945, Tamari studied fine arts in Beirut, ceramics in Florence, and completed her M.Phil in Islamic Art and Architecture at Oxford University. Tamari participated in "Forces of Change: Women Artists from the Arab World" exhibit in the National Museum of Women in the Arts in Washington D.C. in 1994. Tamari's work is mostly ceramic based. She also works on "sculpted paintings": Bas-relief pictures made from clay which she glazes and fires herself. She currently resides in Ramallah, in the West Bank, and teaches at Birzeit University.