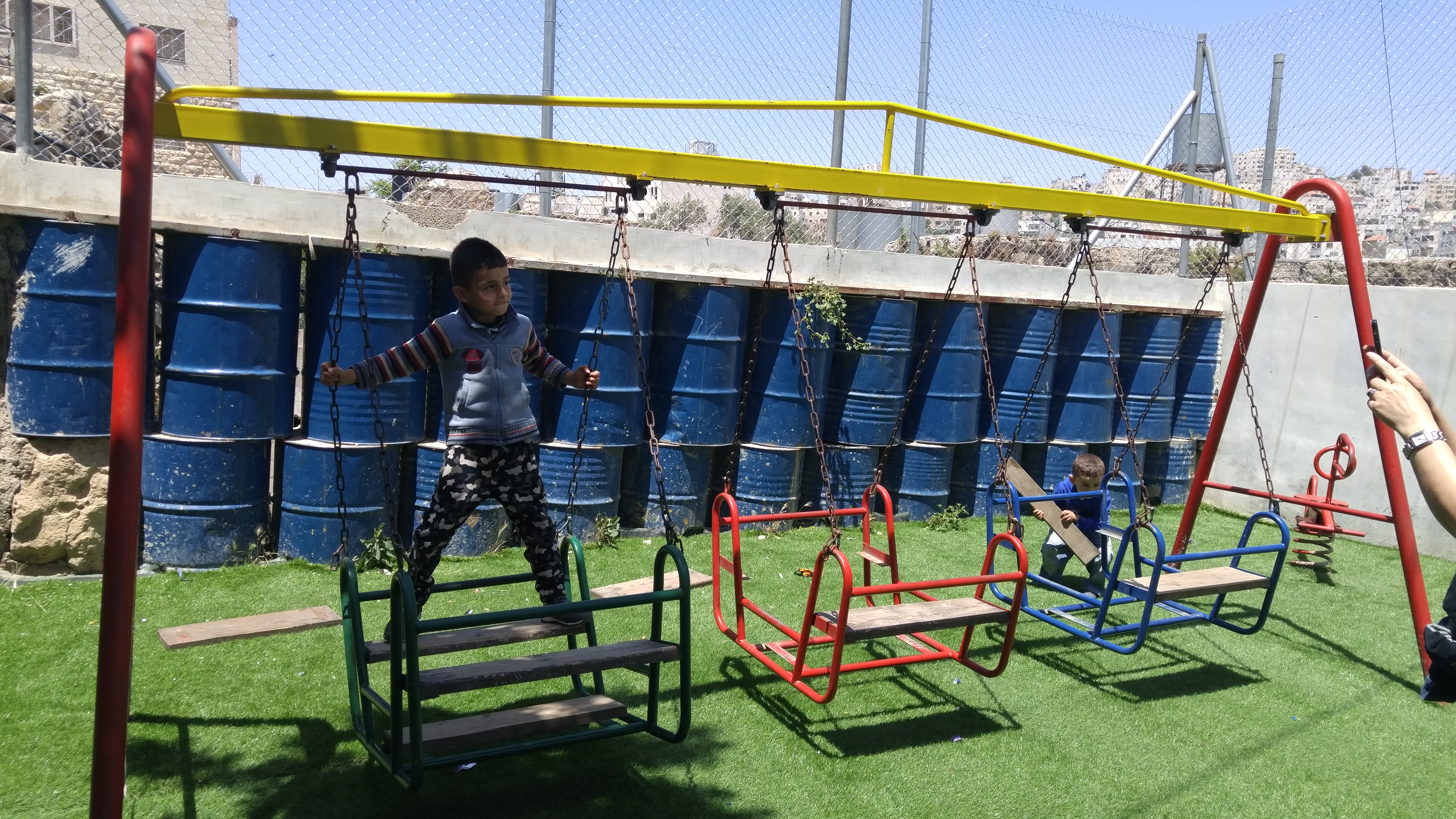 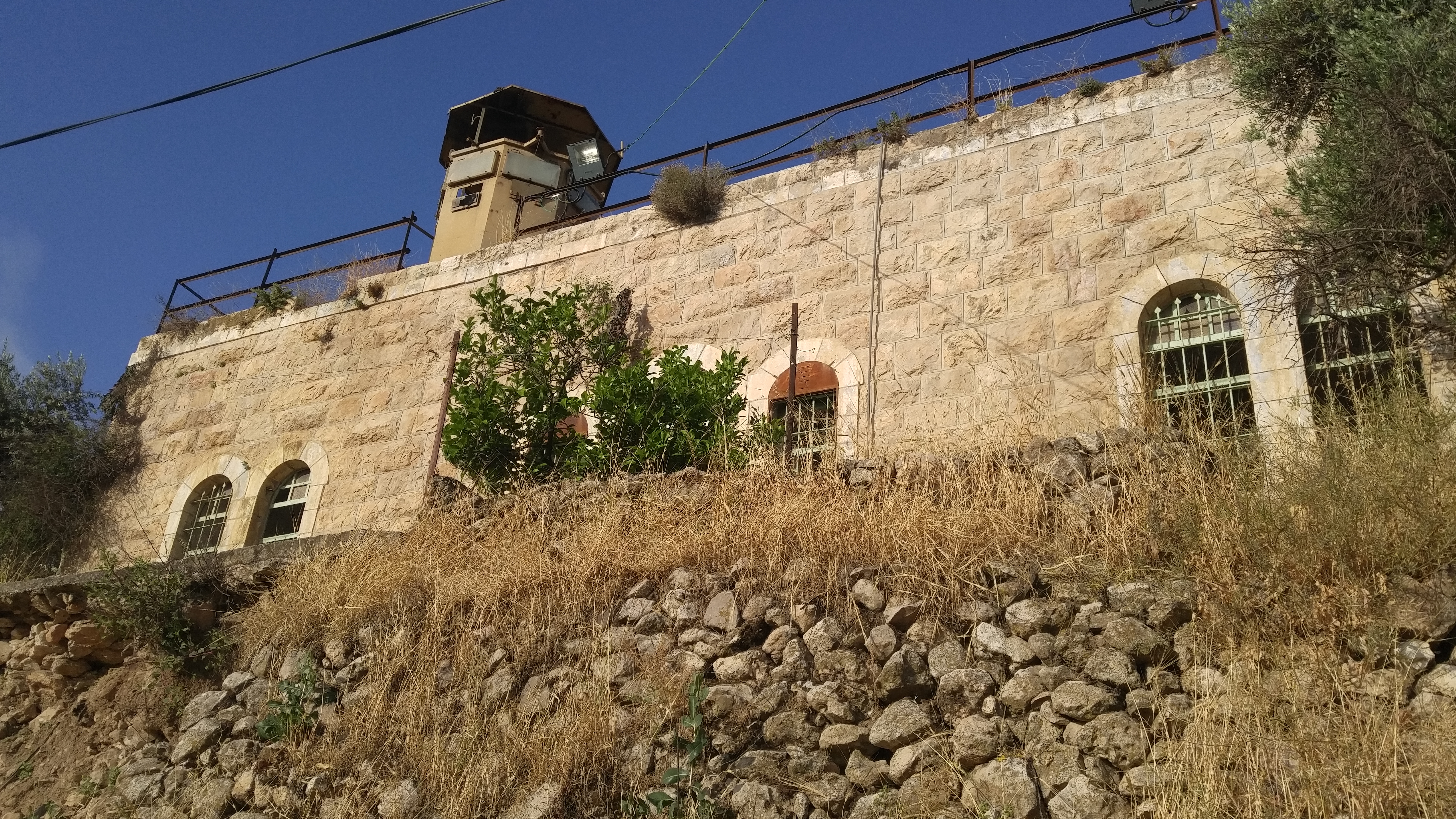 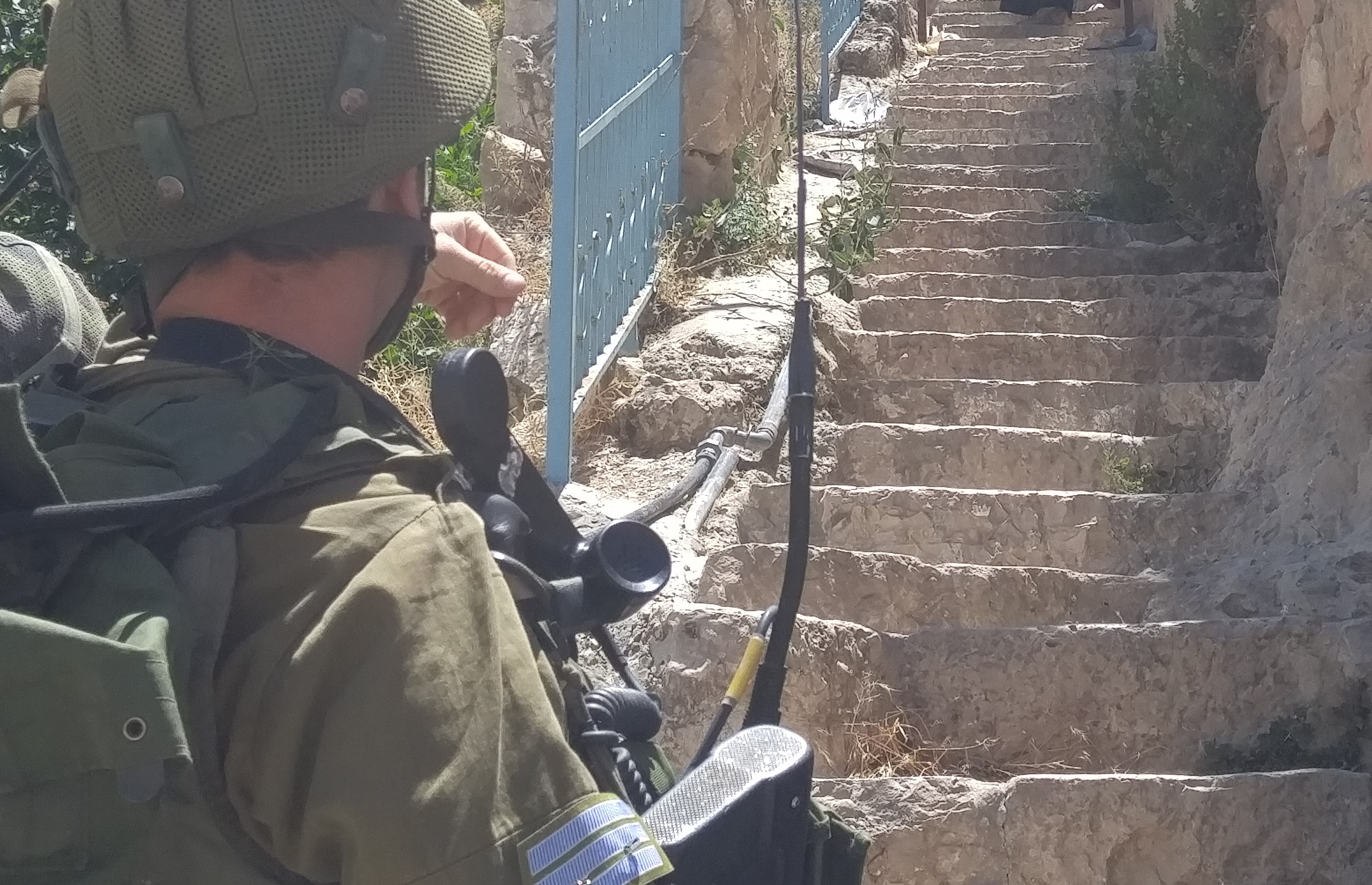 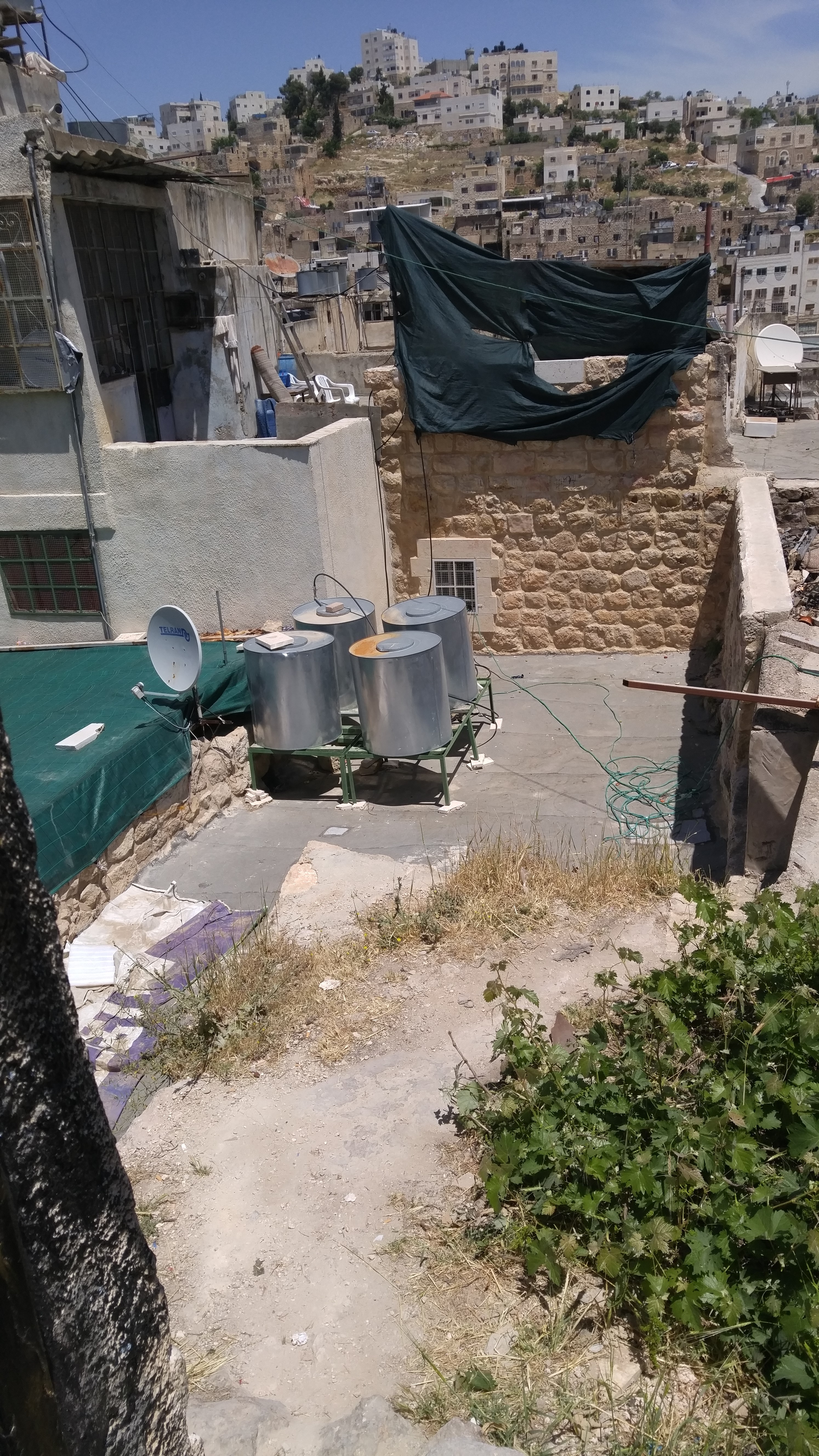 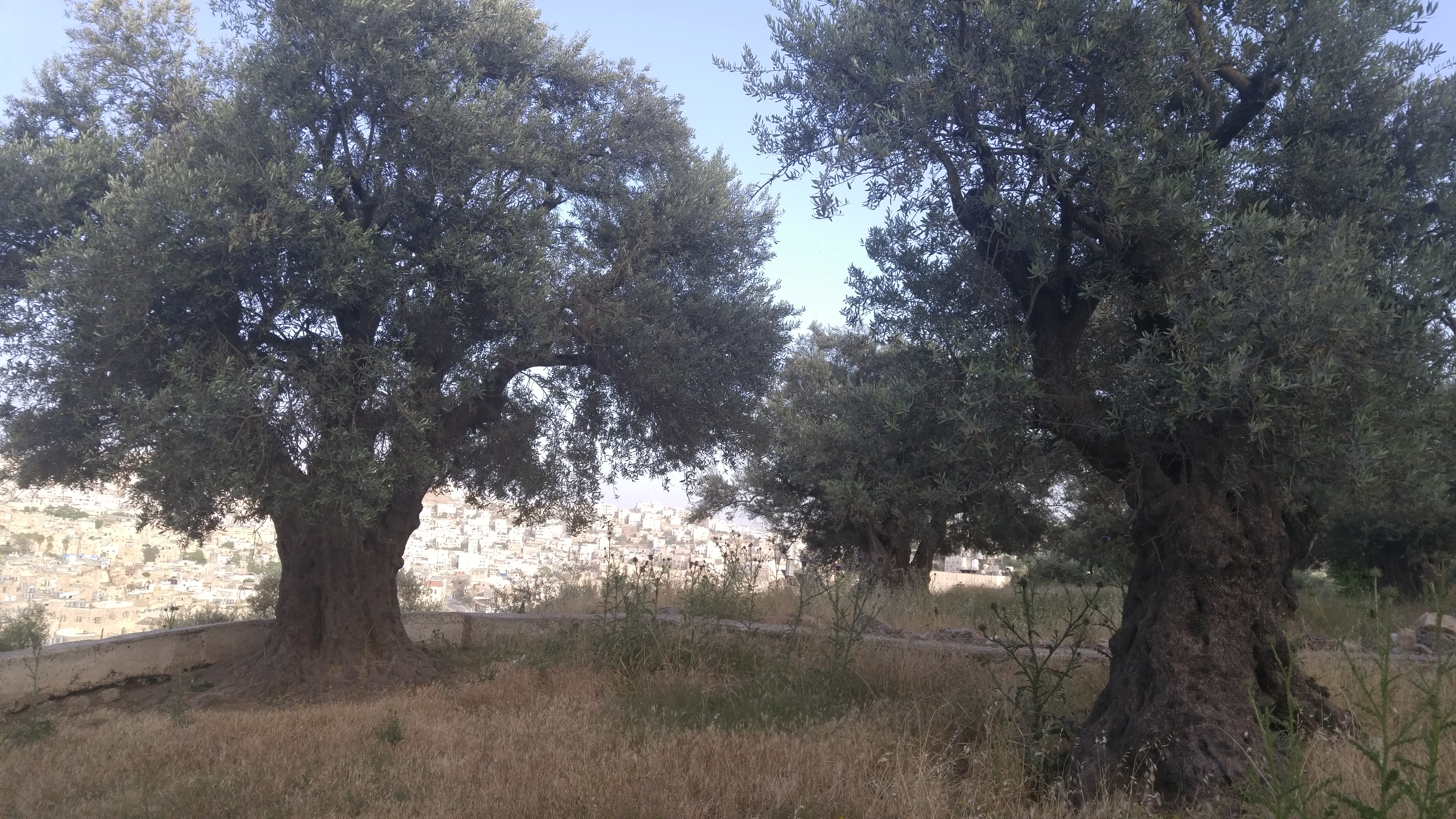 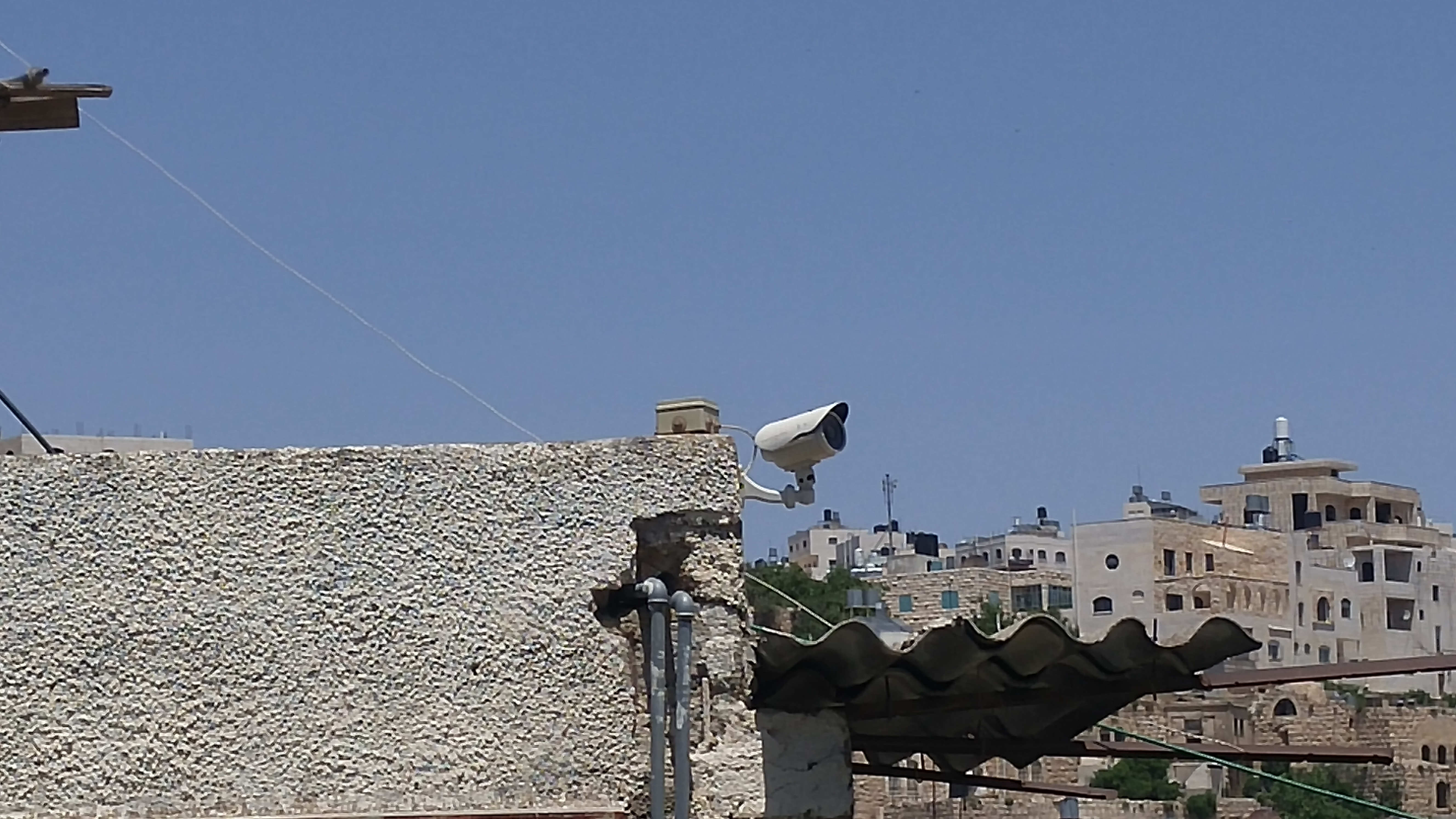 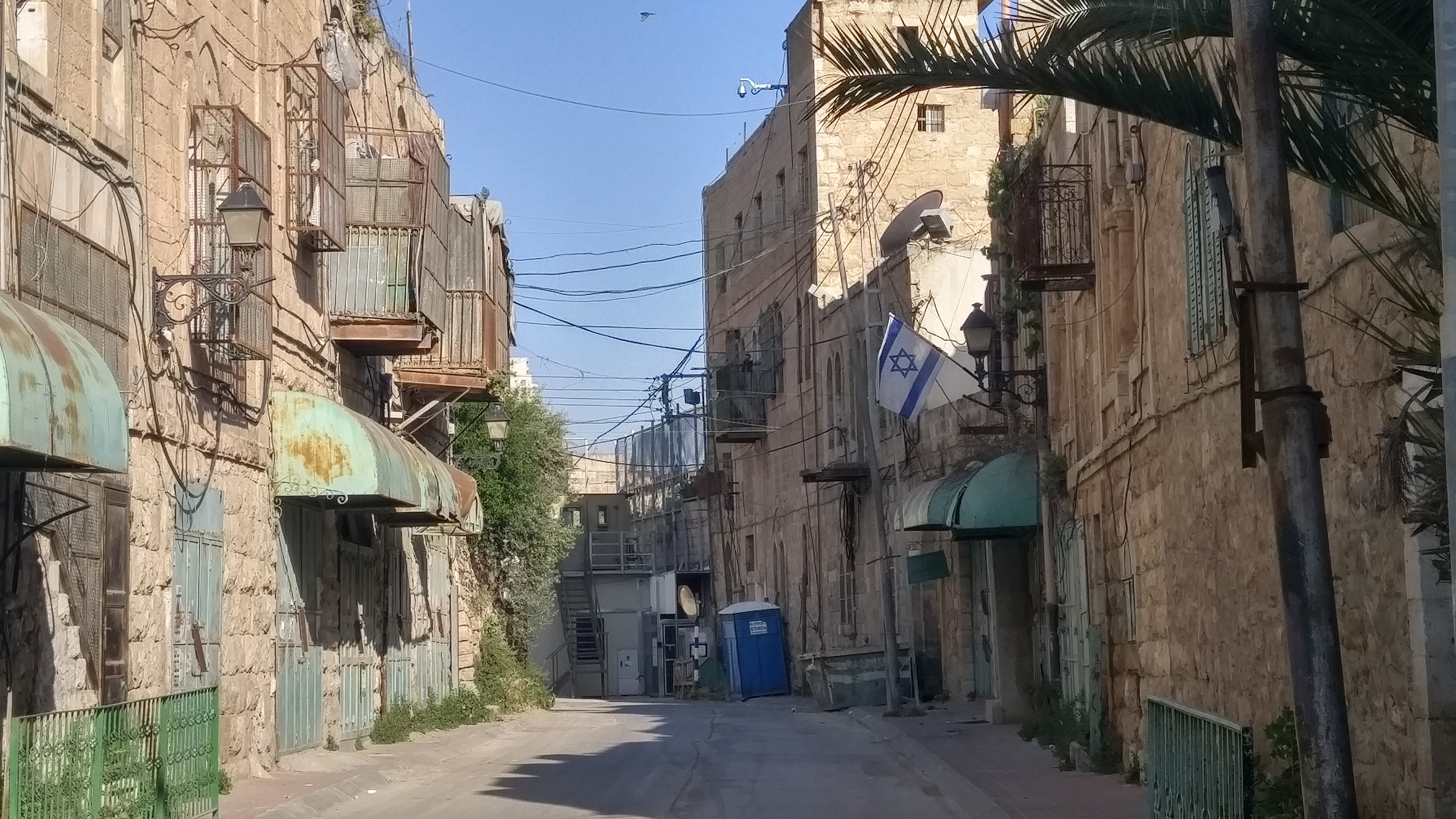 Shuhada kindergarten may be one of the most vulnerable schools in Hebron. The school sits halfway to the crest of Tel Rumeda, the oldest site in Hebron, Palestine, where pottery shards dating to 3,500 BC have been found. Just fifty meters behind the school lies a community of Israeli settlers who employ harassment and violence to pry from the hands of Palestinian owners as many homes and as much of the land as possible. To protect the settlers, a fortress of more than a dozen Israeli military checkpoints, guard towers and mobile military bases ring the settlement and the school. Razor wire is everywhere. It lines the school’s chain-link fence and is almost invisible in the tangled weeds and brush through which the children, their parents and teachers walk to and from the school. (See photos 1-2)

By military order and under military guard, steep stairs offer the only way in and out of the school grounds: 41 steps leading up from Shuhada street and military checkpoint or 28 steps down from Tel Rumeda. These “stairs” are a treacherous, stone and gravel, ankle-breaking obstacle course at a 40 degree incline. Pregnant women and those carrying propane tanks or groceries to their homes can often manage but the elderly and disabled don’t stand a chance. (See photo 3)

Next to the school lives 11 year-old Waseem Zawiye and his family. To get to the Zawiye family home, you must walk from the stairs to the entrance gate, through the school playground and then balance beam your way across the top of a seven inch wide concrete wall to reach the roof of their home which has become a makeshift patio. The Zawiye’s front door on Shuhada street was one of the hundreds that were welded shut by the military for “security reasons” in the mid 90’s which forces them to use the school playground as the only access to the home. (See photo 4)

Five years ago in the middle of the night, three settler teens took Waseem from his bed and carried him up the steps and into a grove of olive trees where they beat him. After being alerted by Waseem’s brothers and sisters, his parents and relatives found him and called the Palestinian police and medics but the Israeli soldiers at checkpoint 56 wouldn’t let them through. At the home, the soldiers found Waseem wounded and crying and his parents hysterical. (See photo 5)

The soldier’s questions quickly foretold the outcome of the investigation. How many kidnappers were there? What were they wearing? Why couldn’t the parents identify them and what had Waseem done to provoke them? With no security camera’s in the home what proof exists that settlers were involved? Perhaps the parents themselves had beaten Waseem. This must have been a few children playing childish games. If the parents wanted to they could file a report at the police station.

Waseem’s parents filed a report the next day and fearing another attack, the Zawiye’s installed one security camera and aimed it at the entrance gate. Days later, the soldiers returned. Why had the family filed a police report? The IDF then cut the camera’s wires because it posed a threat to the security of the soldiers who work in the community. Then they arrested Waseem’s father on the charge that his papers were out of date, which was a lie. He spent the next three months in jail and his family had to pay 2,000 shekels (about $520 dollars) to get him out. (See photo 6)

If this were an isolated incident anywhere else in the world it would cause an uproar. But, this is the formulaic nightmare lived time and again by many Palestinian families in Hebron and throughout the illegally occupied West Bank. An attack by settlers where no investigation is performed by the Israeli authorities, causing a report to be filed and then the victims are retaliated against. This is the essence of the illegal Israeli occupation of Palestine and their strategy is simple: make families as uncomfortable as possible, even to the point that they fear for their lives, then give them no one to turn to in times of need so that they will abandon their schools, homes and property – with settler families waiting in the wings.

In Hebron alone, there are dozens of schools like Shuhada kindergarten and hundreds of families like the Zawiye’s and they all deserve our attention and protection. But this is the least we can do. What the Zawiye’s need and deserve is an end to the illegal Israeli occupation of Palestine. An end to the conditions that enable their daily oppression. In my humanity I am appalled at how the international community has abandoned them but my Christian faith compels me to act and to ask that everyone who hears this story to do the same. We all must do everything in our power to end the occupation. (See photo 7)

(For this article, the names of individuals and families have been changed).

Daniel is an M.Div. student in Chicago and a Member in Discernment in the UCC's Chicago Metropolitan Association. Prior to pursuing ordained ministry, Daniel was a faith-based community organizer in several states. Daniel is serving on the World Council of Churches' Ecumenical Accompaniment Programme in Palestine and Israel (EAPPI) as an Ecumenical Accompanier and as a volunteer with the Global Ministries of the Christian Church (Disciples of Christ) and United Church of Christ. Any views or opinions contained herein are solely those of the author and do not necessarily represent those of the WCC.