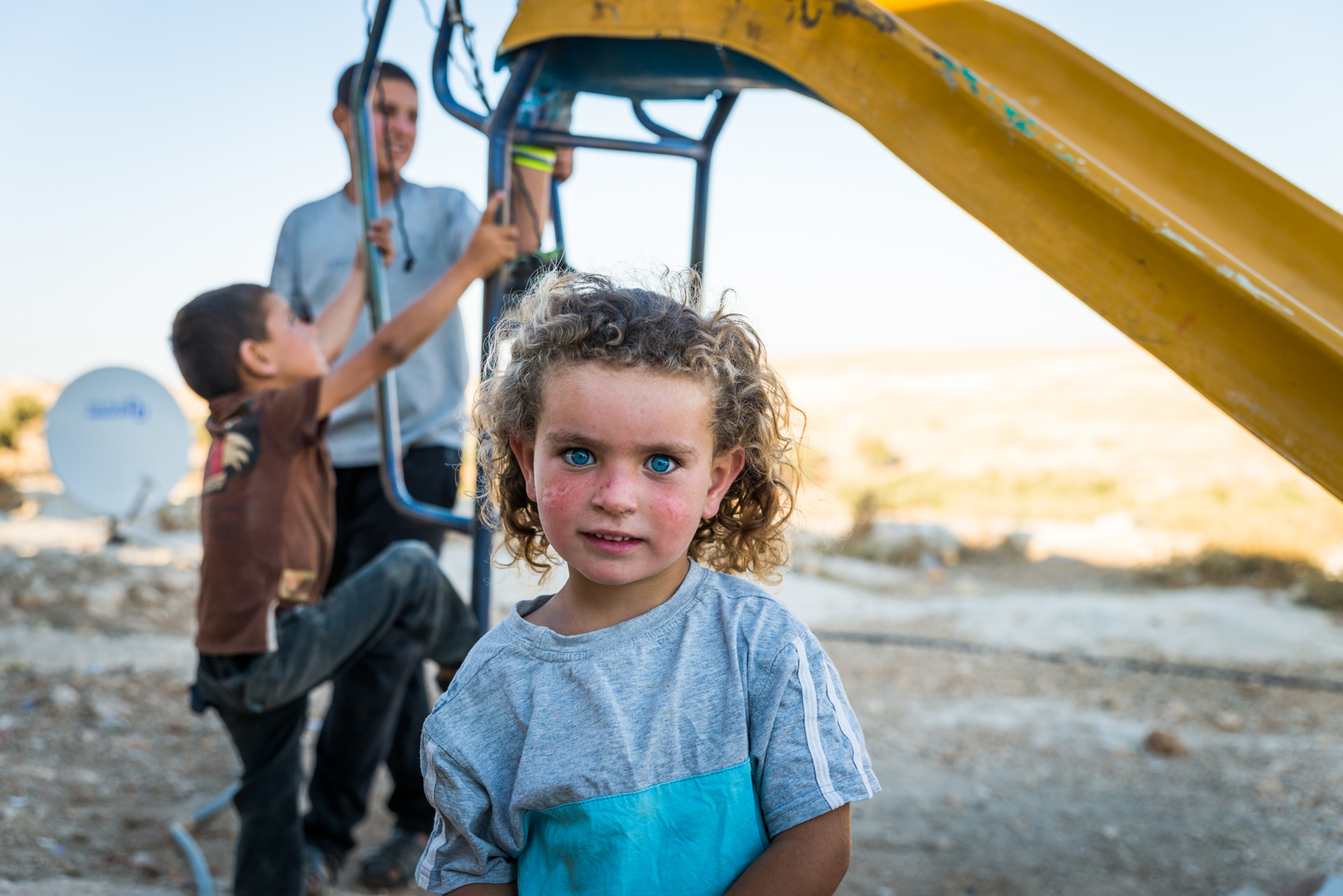 A Palestinian girl stands in front of a slide in Susiya. 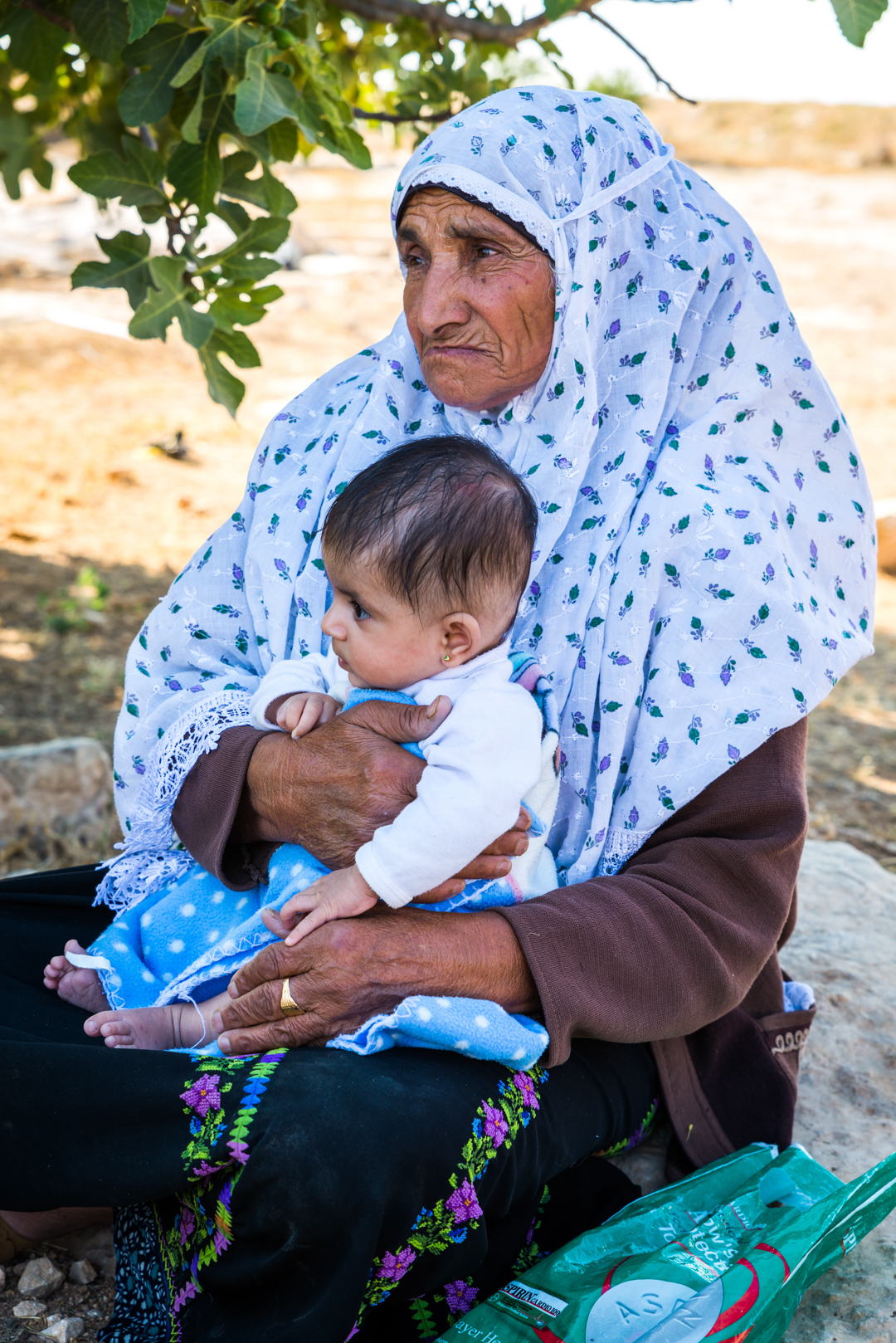 A resident of Susiya talks about her life under occupation and how she copes with not only the constant threat of demolition but also the fear of settler activity and violence. 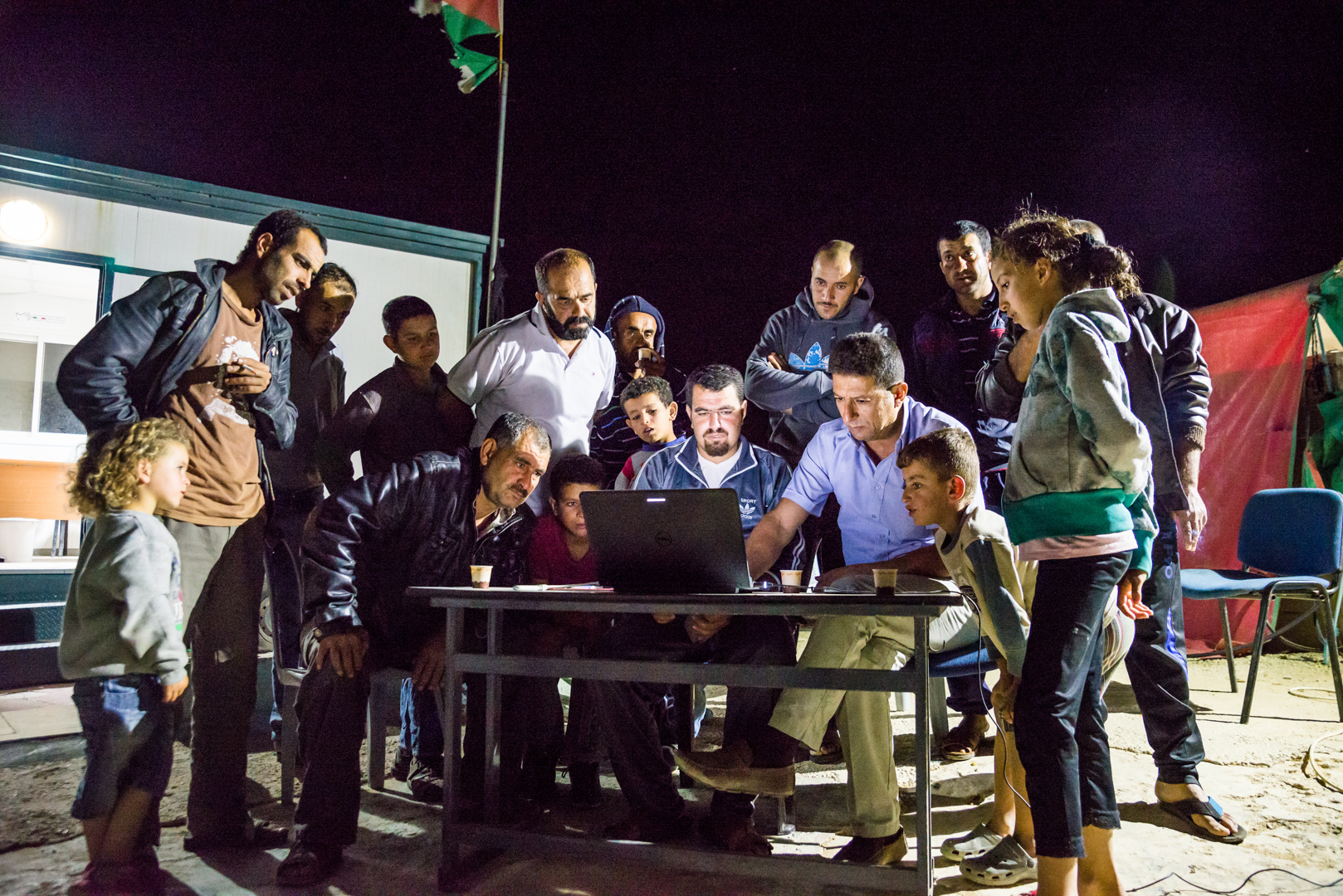 On the evening of July 15, the residents of Susiya received a document from the Israeli military detailing which structures are due to be demolished first. 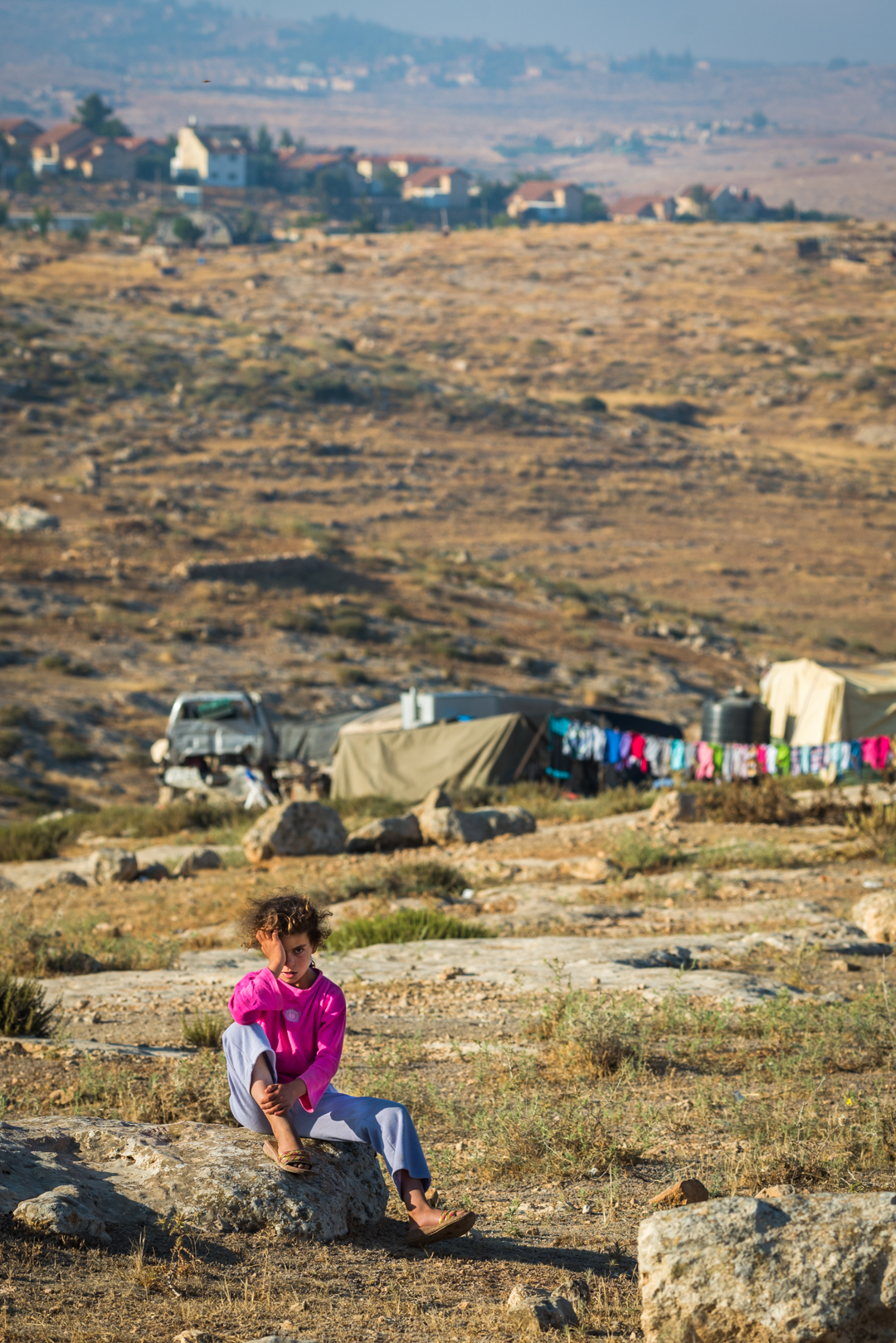 A Palestinian girl sits in front of Susiya, her village, overlooked by an illegal Israeli settlement on the hill. Although she's a child, she understands that because of the settlement, the Israeli authorities will soon demolish her home and village. 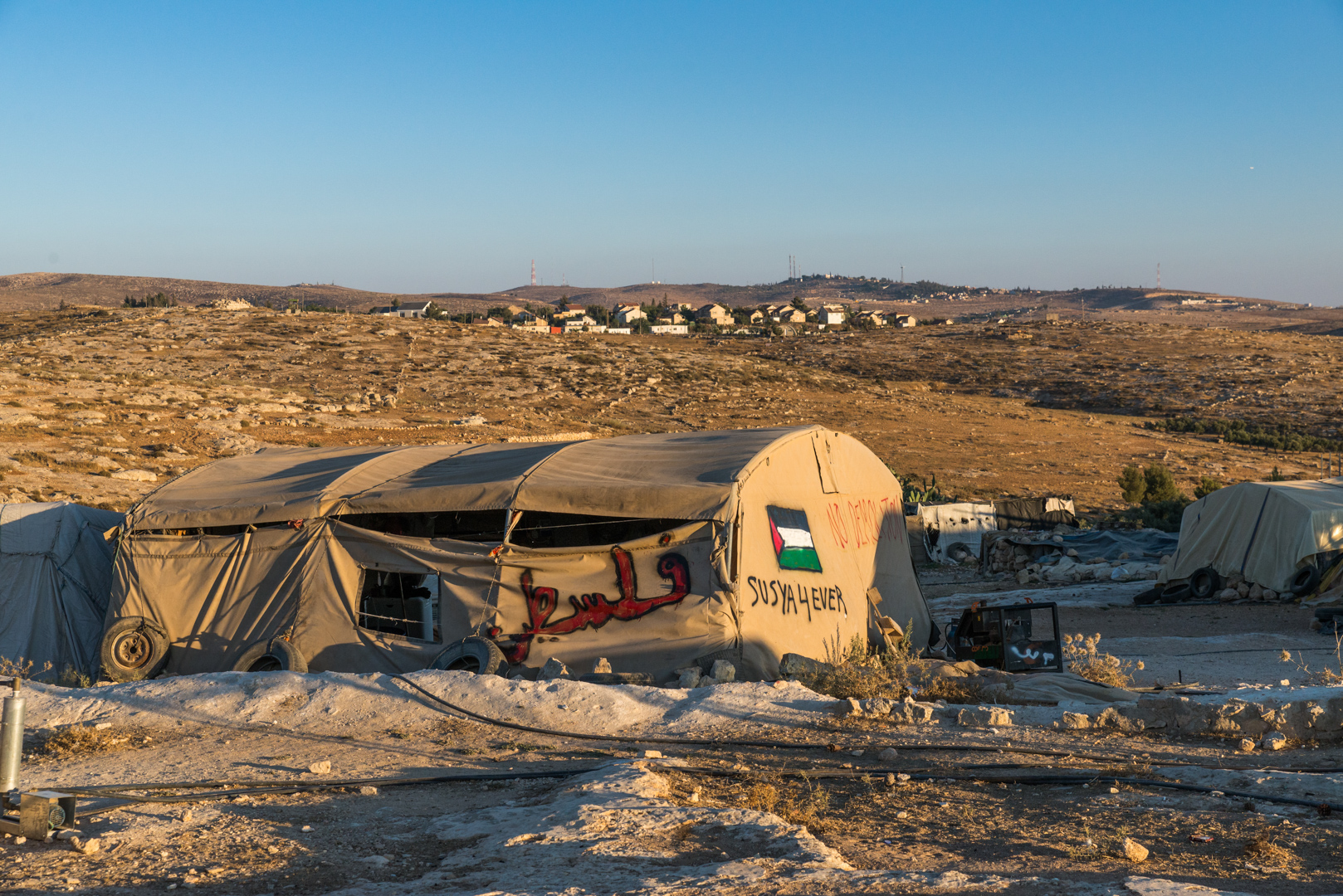 The village of Susiya is made up of tents and caves, all of which are under demolition order. 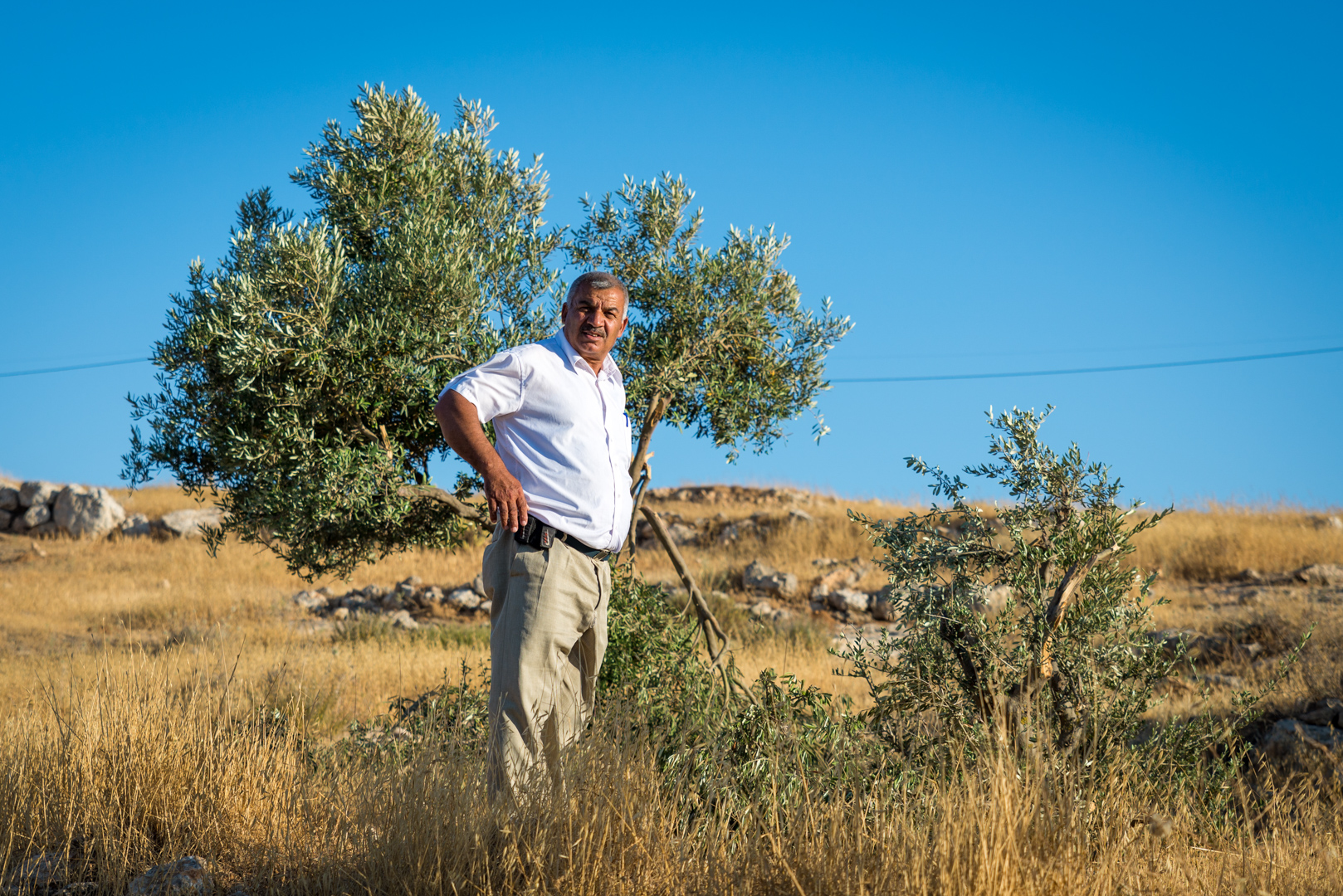 A Palestinian man stands next to an olive tree that like many of the trees has been damaged by Israeli settlers in an effort to force the residents of Susiya to leave their land. 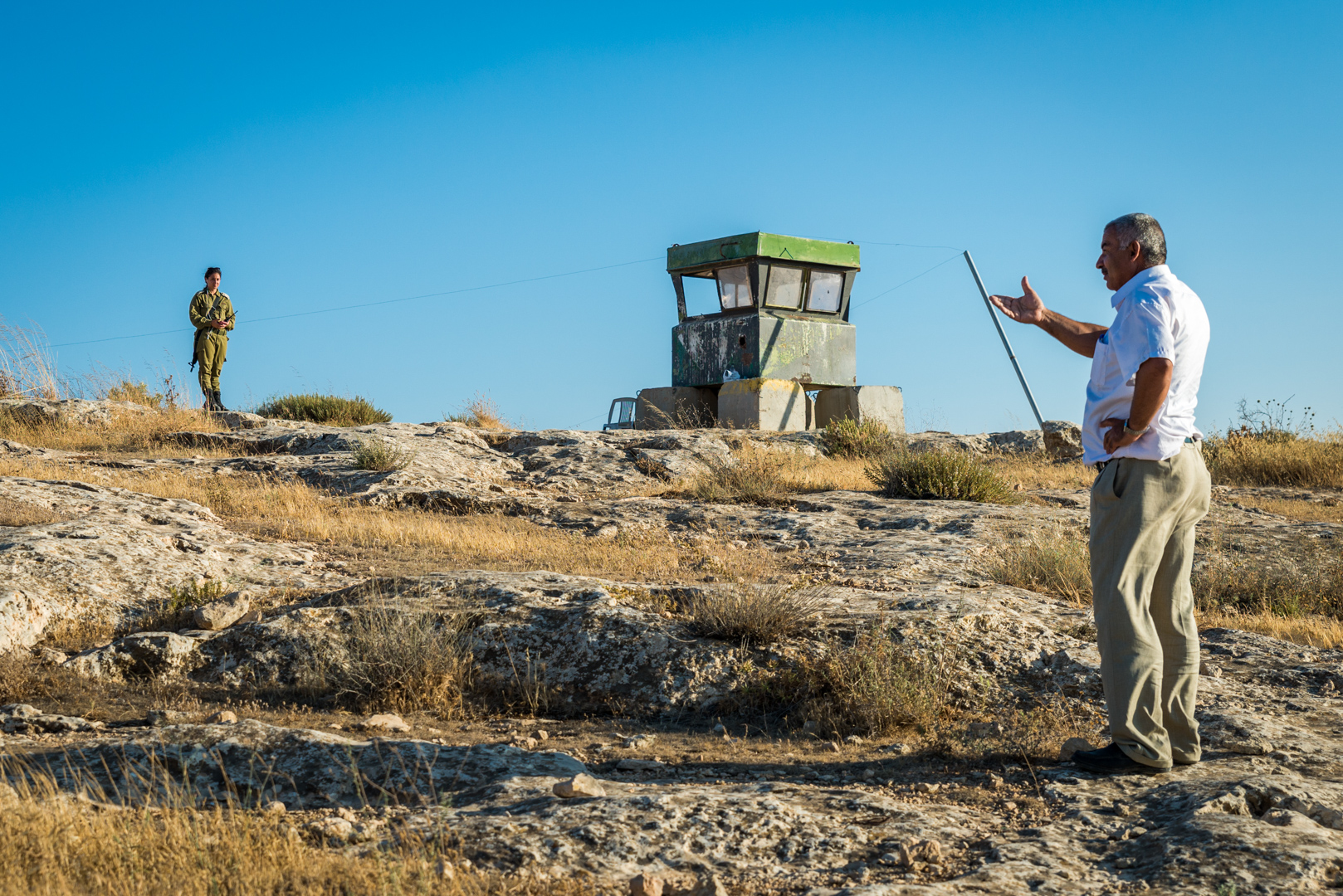 A Palestinian man confronts an Israeli soldier and asks why the soldiers did nothing to stop the settlers damaging his olive trees. The soldier doesn't respond and calls for backup. 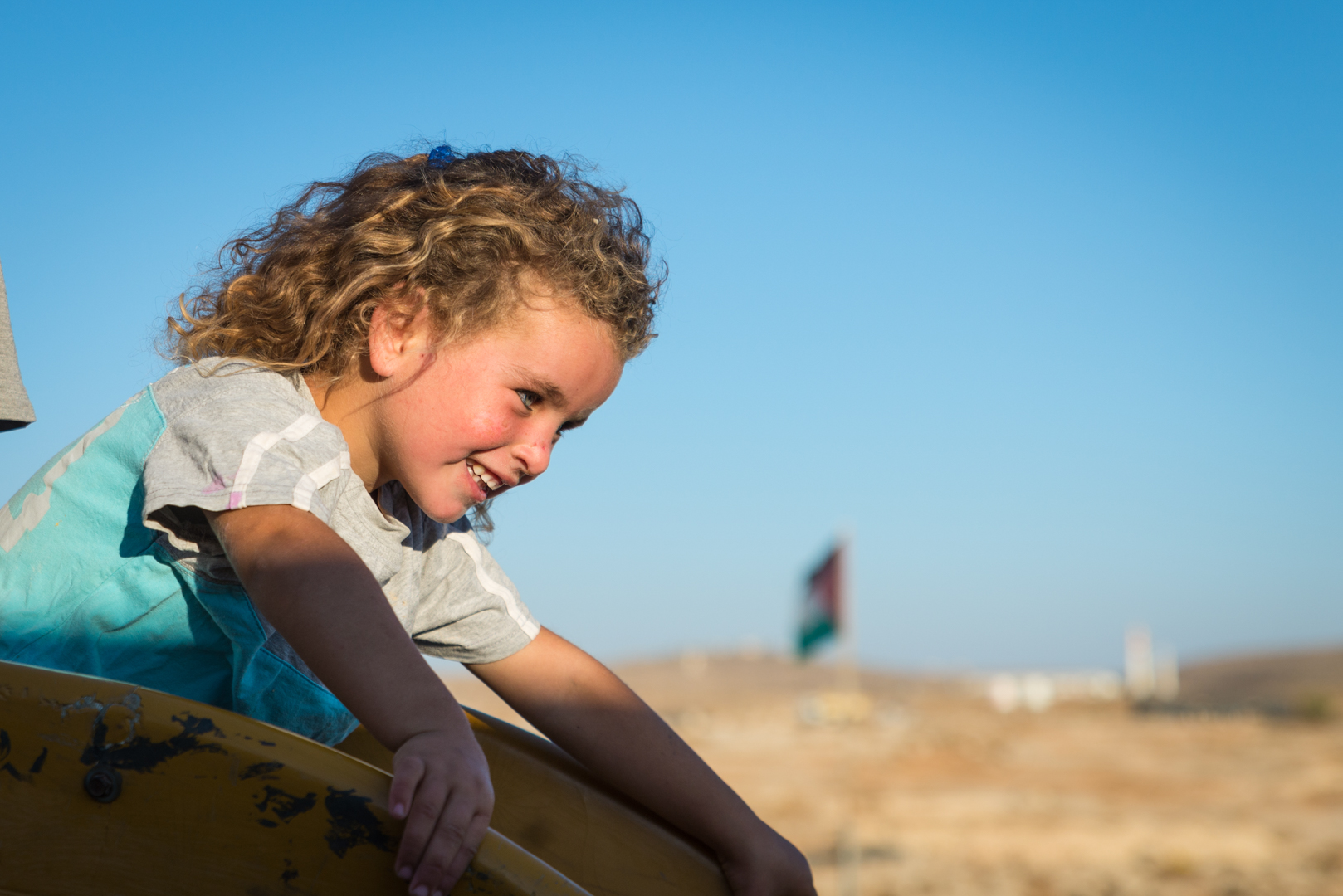 A Palestinian girl plays on a slide in Susiya, oblivious to the fact that it may soon be demolished along with the rest of the village. 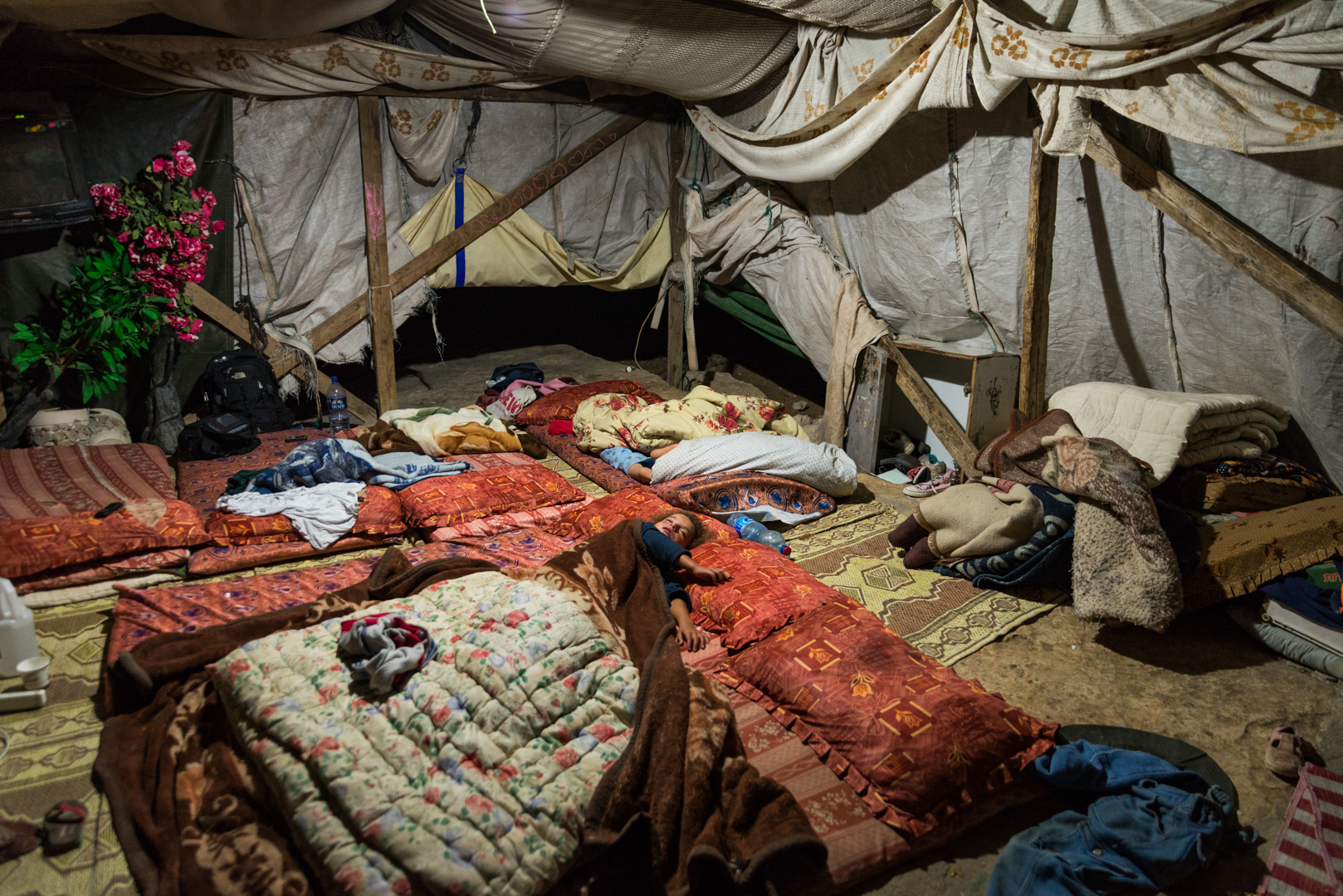 Children sleep inside their family tent in Susiya. It is one of the structures due to be demolished by the Israeli army. 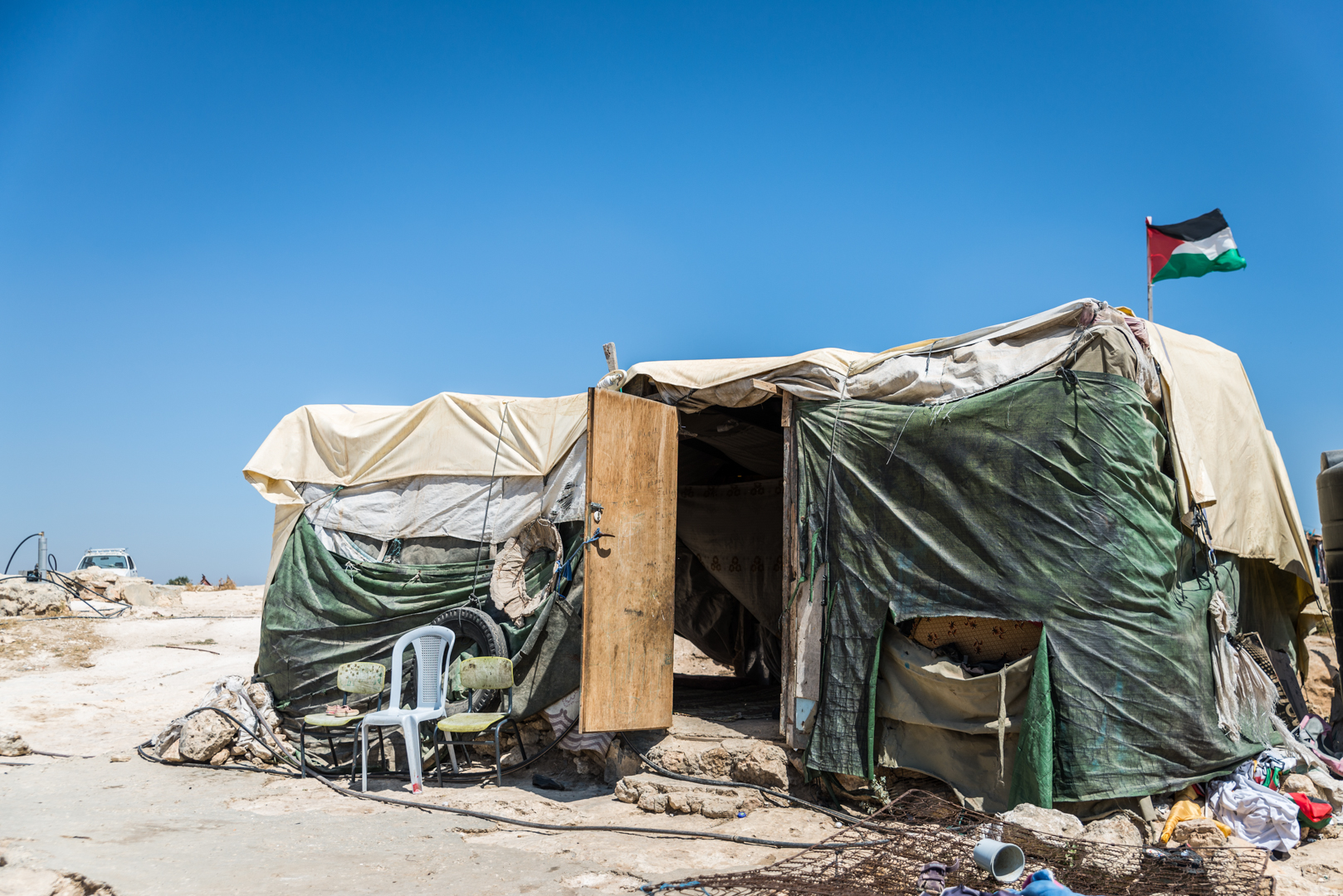 One of the residential tents in Susiya that is scheduled to be demolished before the 3rd of August 2015. 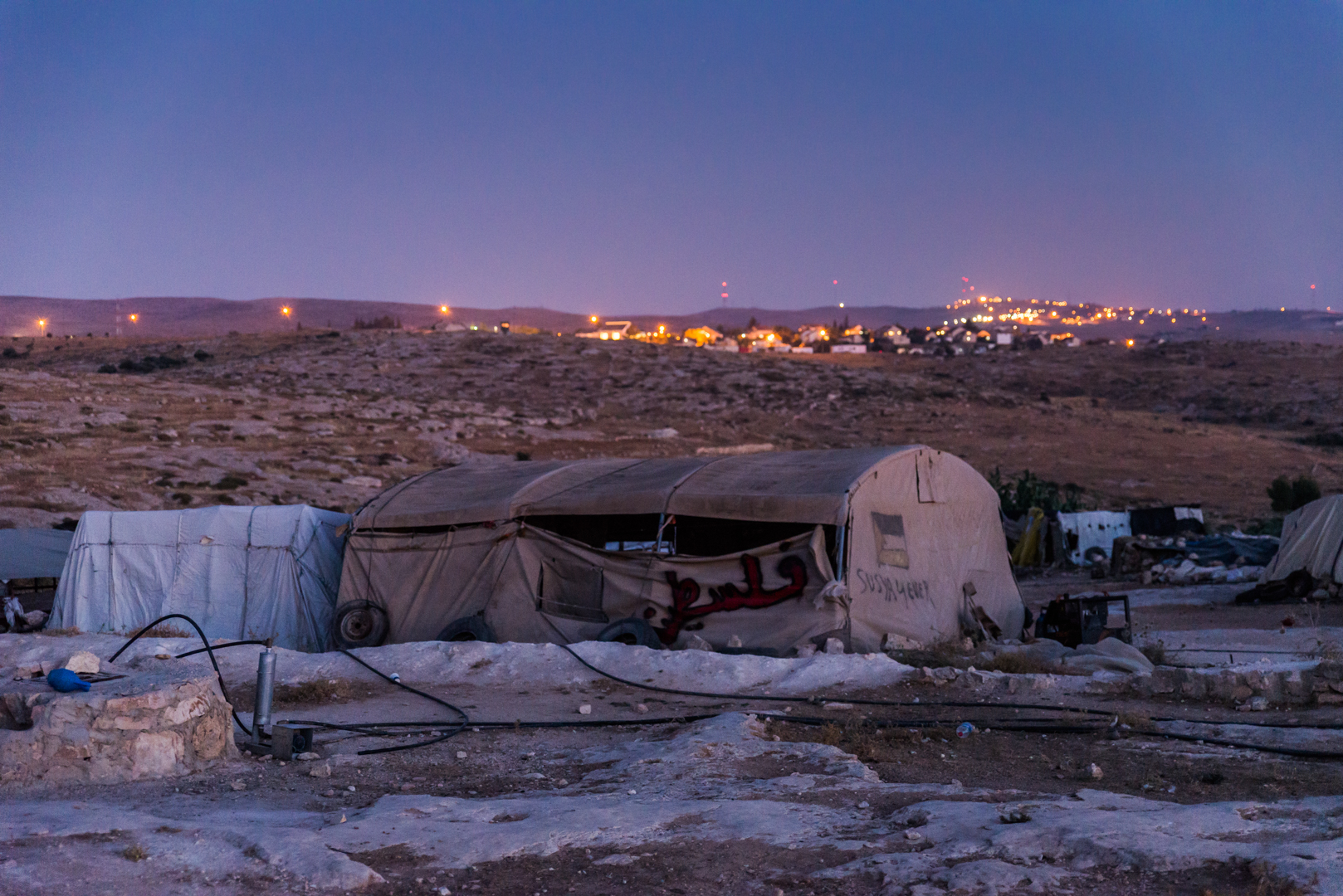 The residents of Susiya live in tents and caves without access to running water or electricity. The nearby illegal Israeli settlement has both in abundance. 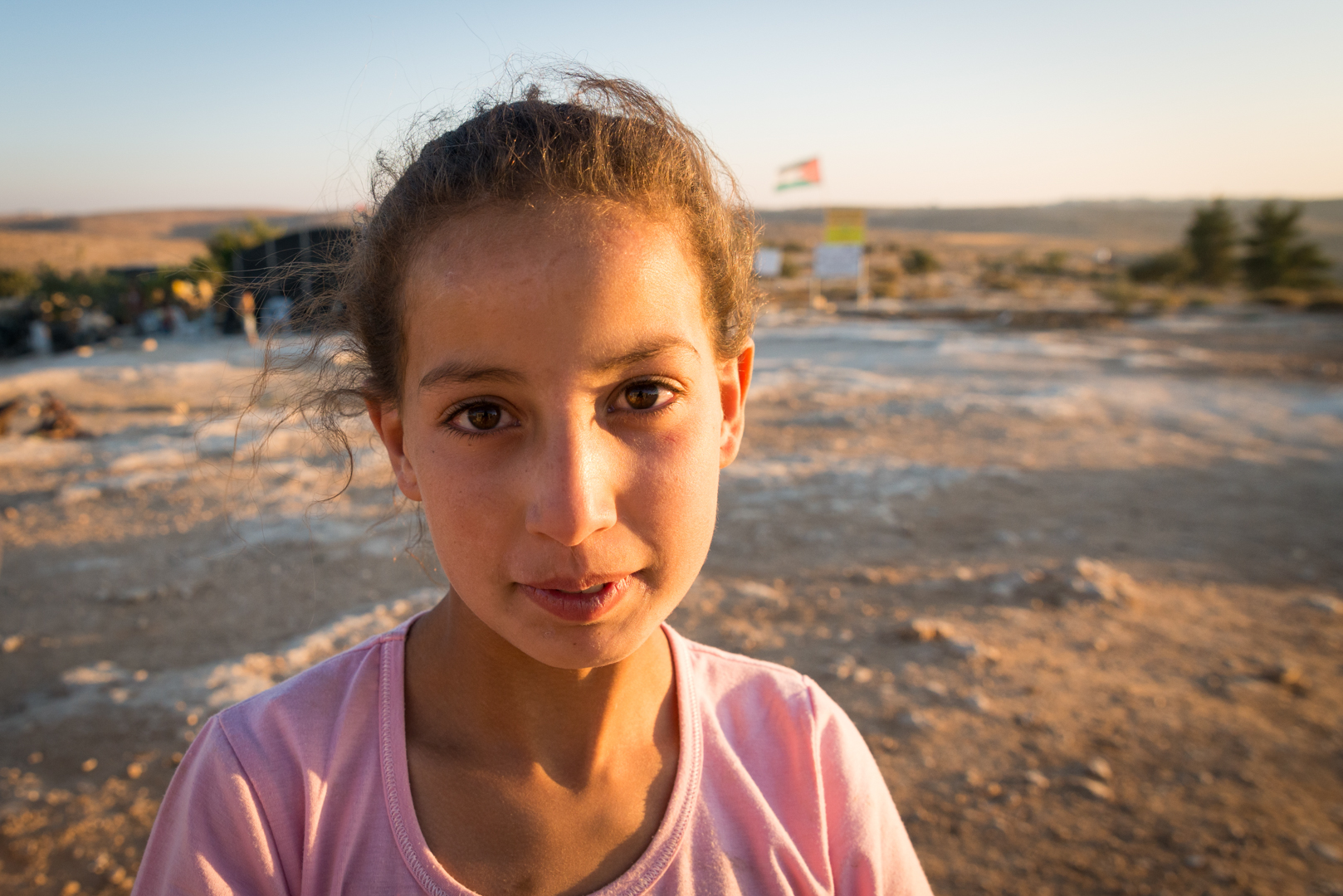 A Palestinian girl whose home in Susiya is scheduled to be demolished before the 3rd of August 2015, leaving her and her family homeless in harsh desert conditions.

A young Palestinian man sits inside his family's home in Susiya. It is one of the structures due to be demolished by the Israeli army.

Following a ruling by Israel's High Court of Justice on May 15 allowing the army to demolish the entire village of Susiya and expel its residents to Area A of the Occupied Territories, the people of Susiya now prepare for the imminent destruction of their homes.

After years of threats and multiple demolition orders, the villagers refuse to give up hope and continue to fight for their legal right to remain living on their land.

Susiya is a small, peaceful village located in the South Hebron Hills in the West Bank, home to approximately 350 men, women, and children.

On July 15, community spokesman Nasser Nawajaa received a document from the Israeli military giving details of the structures that are scheduled to be demolished. Over 30 are listed, including residential tents, a school, a health clinic, and solar panels, which are the only source of power for the village and were funded by European governments.

Approximately half of the village is due to be demolished first, with further demolitions expected to follow. Twenty-one of the buildings slated for demolition were built with funding from European governments.

Although no specific date has or will be given, the demolition is expected to take place before the 3rd of August, the date scheduled for an appeal hearing at the High Court of Justice.

This will not be the first demolition of the village. In 1986 the residents of Susiya were expelled from the original site of their village after the Israeli authorities declared it a National Archaeological Park. Determined to stay on their land, the villagers took up residence on their agricultural land. In 2001 the village was once again demolished, with the Israeli army destroying tents, caves, and cisterns, as well as agricultural land, killing the farm animals.

Remaining steadfast on their farmland, the people of Susiya again rebuilt the village with tents and caves and continued their struggle in resistance to the constant threats of demolition.

In 2012, the Israeli authorities issued demolition orders to over 50 temporary shelters built by the residents. In 2014, the residents of Susiya, represented by the Israeli group Rabbis for Human Rights, went to court in an effort to freeze the implementation of the demolition order and submitted a master plan for the legal development of the village. The Civil Administration rejected the master plan, giving various reasons, one of which suggested that the villagers would have a better quality of life in the nearby town of Yatta and should therefore relocate there.

The result of the court case was part of Israel's policy in Area C of the West Bank to facilitate the confiscation of Palestinian land in order to build and expand existing settlements and to expel Palestinians from Area C.

The villagers live under extremely difficult circumstances without access to running water and electricity, and face regular, often violent, attacks from settlers. The destruction of olive trees by the settlers is a common occurrence.

If the demolition order is carried out as planned, over 300 Palestinians will be expelled from their homes, their community, and their land, rendering them homeless in severe desert conditions.

Claire Thomas is a photojournalist from Wales, UK currently based in the West Bank. A Politics graduate, Claire developed a passion for photography while travelling and working overseas. Claire now seeks to use photography as a tool to raise awareness of social issues around the world, and works closely with a community-based organisation in Ghana that supports women and children living with HIV/AIDS.