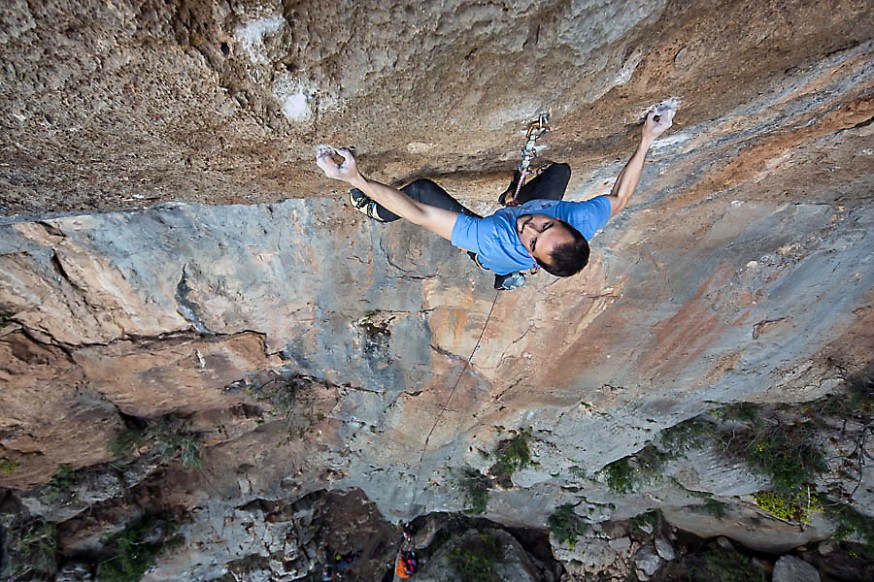 For Palestinian-American rock climber and climbing journalist Andrew Bisharat, climbing isn’t just a sport. “It’s my exercise, my community, my friends, a reason to travel, a reason to stay fit and healthy. And the best part is that it’s a sport you can do your whole life.”

Born in Brooklyn and raised in Westchester, Bisharat lived with his grandfather for the first decade of his life. “He was my main connection to Palestine. I was embarrassed about my Palestinian heritage growing up in New York, I felt like I had something to hide, but he and my dad taught me to feel pride in my roots.”

When he was 16, Bisharat’s high school girlfriend got him a climbing lesson as a present for his birthday. That was the start of it all. “I was pretty much hooked right after that.” When he left for college a couple years later, Bisharat found other people to climb with. He spent his free time teaching himself how to climb from reading books and scouring the internet. After graduating, he picked up and moved to Yosemite for months at a time, living in a tent and climbing as much as he possibly could.

As he grew more committed to climbing, Bisharat, who said he was always introverted, turned to writing to process the powerful experiences he was having. It wasn’t long before his two forms of expression—climbing and writing—merged into one. “I spent a semester abroad in New Zealand and mostly just climbed the whole time I was there. I was listening to the radio and heard this story about a mountaineer who had recently climbed the highest mountain in New Zealand. He did this 20 years after losing both legs to that mountain. I don’t know what possessed me to do it, but it felt like an opportunity to write something about someone. I had no real knowledge of what I was doing, but I figured out how to get in touch with him, and I asked him if he would do an interview with me. It was such a cool experience. It took a few days to drive up to him; I bought a little tape recorder, sat down on his couch, asked some of the biggest softball questions you could ask, then I went home and spent the next three months making every mistake you could possibly make in journalism and writing. I must’ve rewritten that first paragraph a dozen times. When it was finally done, no magazine even published it because it was so awful. But that process of failing on my own was very informative. That was the start of writing about climbing and writing professionally for me.”

After graduating from college, Bisharat interned at Rock and Ice Magazine, where he was soon hired full-time as an editor. He stayed there for 9 years, making lasting connections and building his voice in the climbing world. He’s been freelancing since 2013, writing numerous pieces for National Geographic and The New York Times. He also runs his own climbing site, which he calls his passion project. “I host other climbers’ stories there. It’s not just about writing for me, it’s being able to share stories about the climbing world. It’s about having other people process these meaningful experiences and pushing them to put those experiences into words. That’s what I love to do most.” Bisharat also hosts a podcast dedicated to climbing called The Runout and helps teach various climbing clinics. On his own time, he mostly does sport climbing. “It’s more climbing bolted routes, more gymnastics-style difficulty and trying hard moves. The variety of the sport makes it very interesting. You can switch it up and do scary or safe or hard or fun.”

For Bisharat, there’s no question about how important climbing is in his life. He even moved to Colorado so he could always be near a climbing place he loves. “All the people who populate this sport are just amazing. They’re resilient and able to pursue their passion and make sacrifices--living in vans and things just to be a climber. That is a wonderful type of person to surround yourself with.” He’s found a great community, and has no plans of changing that.