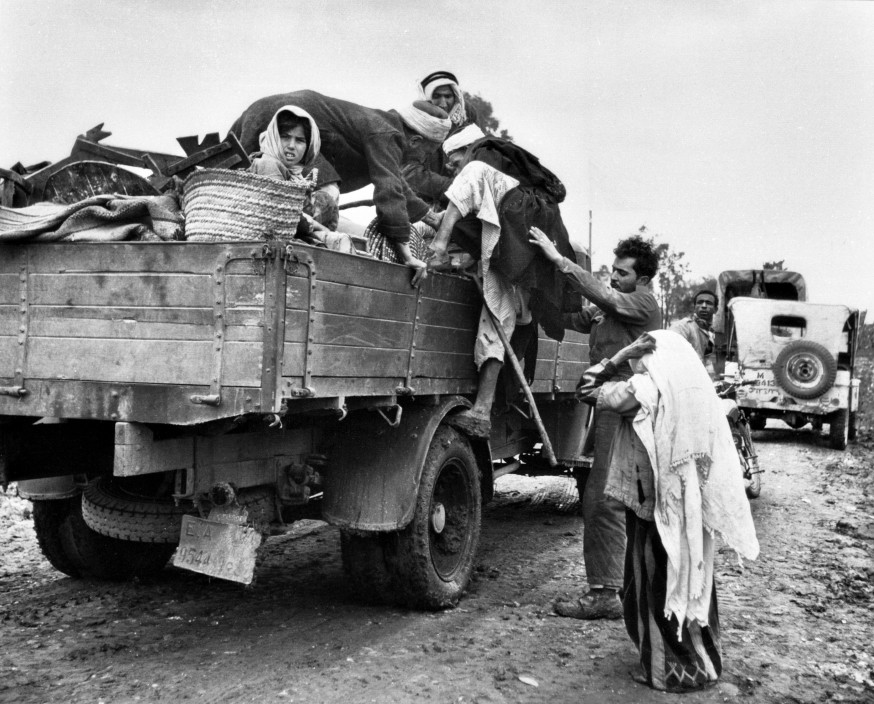 What Is the Nakba?

Before, during, and after the establishment of Israel in May 1948, first Zionist militias and later the Israeli military used terrorism and committed massacres and other atrocities to drive Palestinians from their homes. Zionist militias and the Israeli military also systematically looted and demolished Palestinian property. By the time Israel signed armistice agreements with neighboring Arab states in 1949, there were an estimated 750,000 Palestinian refugees (approximately 75 percent of the Palestinian population of that lived on land that became Israel). Israel demolished between 400 and 500 Palestinian villages, town, and cities.

What Was Life Like in Palestine Before the Nakba?

Palestinians enjoyed a thriving and multi-religious society in Palestine long before Zionism began in the 1880s. Before World War I, Palestinian Muslims, Christians, and Jews lived together in Palestine with equal citizenship rights and religious autonomy under the Ottoman Empire. Palestinians ran for elections to the Ottoman Parliament and represented their Palestinian constituencies there. The indigenous Palestinian economy was self-sustaining and also integrated into regional and global economic trade networks. Before and after World War I, Palestinian identity formed the basis for a modern-day Palestinian nationalism, expressed through newspapers, magazines, civil society organizations, and political parties.

After World War I, Great Britain was given a “mandate” over Palestine by the League of Nations. Mandates were supposed to provide for the self-determination and independence of indigenous populations. However, the Palestine Mandate was different from all other mandates in that it committed Great Britain to promoting the establishment of a vaguely defined Jewish National Home in Palestine. Throughout the mandate (1922-1948), Great Britain privileged the establishment of Zionist political institutions to the detriment of the indigenous majority Palestinian population.


Why Did Palestinians Not Accept the UN Partition Plan?

At the time of the UN Partition Plan, which was recommended by the General Assembly in November 1947, the Zionist movement owned just 7 percent of the land of Palestine and Jewish people constituted only one-third of the total population. Despite this, the partition plan called for the establishment of a Jewish State in more than 55 percent of Palestine. Even within the proposed borders of the Jewish State, there would have been only a tiny majority of Jewish residents (498,000 to 497,000 Palestinians).

Palestinian political bodies, led by the Arab Higher Committee (AHC), rejected the partition plan as a violation of the principle of self-determination and majority rights. Instead, the AHC proposed that Palestine remain a unitary, democratic state with strong minority rights, including proportional representation for Palestine’s Jewish citizens in the legislature, and Jewish communal autonomy in some spheres.

Yes. In March 1948, Zionist leaders headed by David Ben Gurion, who would become Israel’s first prime minister, approved Plan Dalet (D), which called for the “Destruction of villages (setting fire to, blowing up, and planting mines in the debris)...In the event of resistance, the armed force must be wiped out and the population must be expelled outside the borders of the state.”

The implementation of this plan began before Israel’s establishment in May 1948. By that time, there were already between 250,000-300,000 Palestinian refugees who were expelled or fled from their homes often after attacks by Zionist militias on major Palestinian cities–Jerusalem, Haifa, Jaffa, Tiberias–and villages, bombing campaigns targeting civilians, and massacres at villages such as Deir Yassin.

This ethnic cleansing campaign accelerated and intensified after the establishment of Israel, making an estimated 750,000 Palestinians into refugees by the time armistice agreements were signed with neighboring Arab states in 1949. Even after the armistice agreements, Israel continued to ethnically cleanse Palestinians from their homes. For example, Israel continued deporting Palestinians from their homes in al-Majdal (known today as the city of Ashkelon) to the Gaza Strip until October 1950.


Who Are Palestinian Refugees Today?

From an original estimated population of 750,000 in 1948, today there are more than 7 million Palestinian refugees worldwide, 5.7 million of whom are refugees registered with the UN Relief and Works Agency for Palestine Refugees in the Near East (UNRWA), a specialized UN agency established in 1949 to provide social services to refugees. 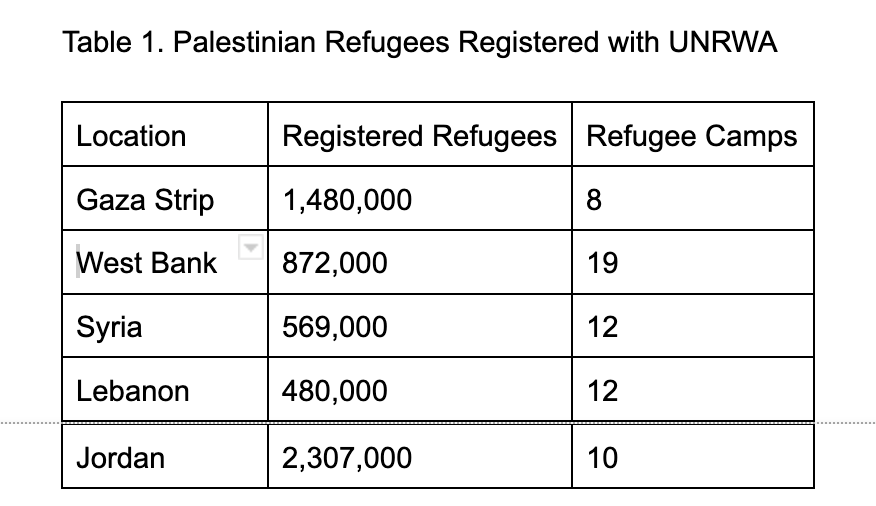 In addition, there are estimated to be more than 400,000 Palestinian citizens of Israel who are classified as internally displaced persons (IDPs). These Palestinians were driven from their homes and dispossessed of their properties, too. Although they remained within the borders of what became Israel and received citizenship in the state, Israel has never allowed them to return to their lands and properties.


What Are Palestinian Refguees’ Rights?

Article 13 of the Universal Declaration of Human Rights states: “Everyone has the right to leave any country, including his own, and to return to his country.”

In addition, UN General Assembly Resolution 194, adopted in December 1948, resolved that Palestinian “refugees wishing to return to their homes and live at peace with their neighbours should be permitted to do so at the earliest practicable date, and that compensation should be paid for the property of those choosing not to return and for loss of or damage to property which, under principles of international law or in equity, should be made good by the Governments or authorities responsible”.

In addition to international law recognizing refugees’ right of return, refugee status is also automatically conferred on the descendants of refugees. According to the UN, “Palestine refugees are not distinct from other protracted refugee situations such as those from Afghanistan or Somalia, where there are multiple generations of refugees, considered by UNHCR as refugees and supported as such. Protracted refugee situations are the result of the failure to find political solutions to their underlying political crises.”


What Is US Policy on the Nakba and Palestine Refugee Crisis?

The United States voted both for UN General Assembly Resolution 194 in 1948, reaffirming Palestinian refugees’ right of return, and for the establishment of UNRWA in 1949. Except for a few years during the Trump administration, the United States has consistently supported UNRWA, contributing more than $6 billion to its budget since 1950.

The fate of Palestinian refugees was hardly addressed at all by the United States again until permanent status negotiations between Palestinians and Israelis began at Camp David in 2000. Shortly before his term ended, President Clinton issued “parameters” for Palestinian-Israeli peace that undermined Palestinian refugee rights. His parameters stated that “One should not expect Israel to acknowledge an unlimited right of return to present-day Israel,” and that repatriation of Palestinian refugees to Israel would be subject to its “sovereign decisions”.

In the most recent round of Palestinian-Israeli negotiations in 2013-2014, then Secretary of State John Kerry reportedly put forward a figure of only 80,000 Palestinian refugees who would be allowed to return to their homes–less than two percent of registered refugees at that time.

Congress has also taken steps to undermine Palestinian refugee rights. Senate Report 112-172 to the 2013 Department of State, Foreign Operations, and Related Programs Appropriations bill directed the Department of State to issue a report to Congress detailing “the approximate number of people who, in the past year, have received UNRWA services: (1) whose place of residence was Palestine between June 1946 and May 1948 and who were displaced as a result of the 1948 Arab-Israeli conflict; and (2) who are descendants of persons described in subparagraph (1).” This reporting requirement attempts to differentiate between the refugee status of original refugees and their descendants, which is contrary to international law.

The intent of Members of Congress to utilize this report to try to extinguish the rights of Palestinian refugees is evident from a 2020 Dear Colleague letter, led by Rep. Doug Lamborn, pressing for the declassification of this report. The letter attempts to erase Palestinian refugees by claiming that their rights are a “fiction”.

Instead of passing legislation to try to negate Palestinian refugee rights, Congress and the Biden administration must center the rights of Palestinian refugees to return to their homes as part of any principled effort to establish a just peace. Any attempt by the United States to broker Palestinian-Israeli peace that is not based on principles of international law and justice is bound to fail.