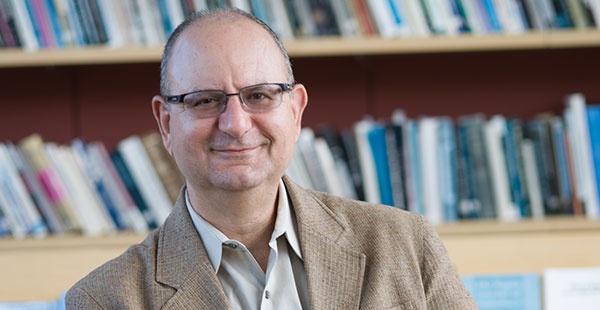 Though other schools have somewhat similar posts, such as Columbia University’s Edward Said Professor of Modern Arab Studies, the Mahmoud Darwish Chair at Brown is unique in that it is dedicated to Palestinian studies. “Whoever holds this chair is not just an expert on Palestine, because that could mean biblical Palestine, Roman Palestine, Mamluk, Ottoman, what have you—this position is about Palestinians,” Doumani explains. “It’s a more modern focus on people regardless of their location. It’s a very inclusive chair, about Palestinians everywhere.”

The post is named for renowned Palestinian poet and author Mahmoud Darwish, whose life, in Doumani’s words, “illustrates the spirit of this chair.” Darwish’s family were forced out from their hometown of Birweh in the Galilee during the Nakba, the mass expulsion of Palestinian Arabs from British Mandate Palestine during Israel’s creation between 1947 and 1949. The family managed to return a year later, but found Birweh, like hundreds of Palestinian villages, razed to the ground. They eventually settled in the village of Deir al-Asad and became Palestinian citizens of Israel. Darwish later spent 26 years living in exile before settling in Ramallah, his life spanning several major facets of the Palestinian experience. Naming the chair after him makes clear the position’s unmistakable dedication to Palestinians. The Mahmoud Darwish Chair is supported by several donors, and it was preceded in 2015 by an endowed postdoctoral position in Palestinian studies. Together, these two endowments provide a strong foundation for institionalizing Palestinian Studies in the United States and beyond.

Doumani’s appointment comes after decades spent publishing, teaching and mentoring students, as well as carving out a place for Palestinian studies within the field of Middle Eastern studies. Indeed Brown notes that Doumani “represents the soul of Palestinian Studies.” Yet he stresses that this accomplishment is not his alone: “Any achievement of this magnitude is never one person. Countless people who have been working for justice made this possible.” Doumani credits Palestinian activists, both inside and outside of university grounds, for the work they have done in building a social and political movement that forced scholars to uplift Palestine within academia. “Twenty years ago, this would not have been possible,” he says. “There’s been a globalization of interest in Palestinians and Palestine.” With this social movement behind them, Doumani and other scholars have been able to establish reputable Palestinian studies programs and ensure that Palestinians who have long been erased or marginalized are now taking their seat at the academic table.

Doumani is a well-respected author and powerful voice in academia, one of the champions of academic freedom in the post-9/11 United States. His personal story is similar to that of many Palestinians: his family was expelled from their home in Haifa in 1948, and he was born in Saudi Arabia in 1957, far from his homeland. He spent much of his childhood in Lebanon before moving to Toledo, Ohio, where he faced frequent anti-Arab racism, as he did at Kenyon College, which he says was “very white and well-to-do” at the time. Based in part on these experiences, and in part on the 1973 war which began shortly after he entered college, Doumani moved away from his initial interest in pursuing medicine and toward his path studying Palestinians and Palestinian history.

Now, Professor Doumani’s research focuses on peoples, places, and time periods erased or marginalized by mainstream scholarship on the early modern and modern Middle East. Doumani also writes on academic freedom and the Palestinian condition. His books include Rediscovering Palestine: Merchants and Peasants in Jabal Nablus, 1700-1900, and Family Life in the Ottoman Mediterranean: A Social History. In addition to his research and scholarship, Doumani is the editor of a book series on Palestinian studies with the University of California Press, co-editor of the Jerusalem Quarterly, and a member of the editorial committee of the Journal of Palestine Studies. He also established the Center for Middle East Studies at Brown University, which now includes the Mahmoud Darwish Chair in Palestinian Studies.

Given all that the new position represents, Doumani wants the chair to be a force for change within academia. “The chair is the backbone of a field of study,” he says. “My hope is that the endowment of this chair will have a cascade effect that contributes to the process of expanding the field of Palestinian studies to other universities.”