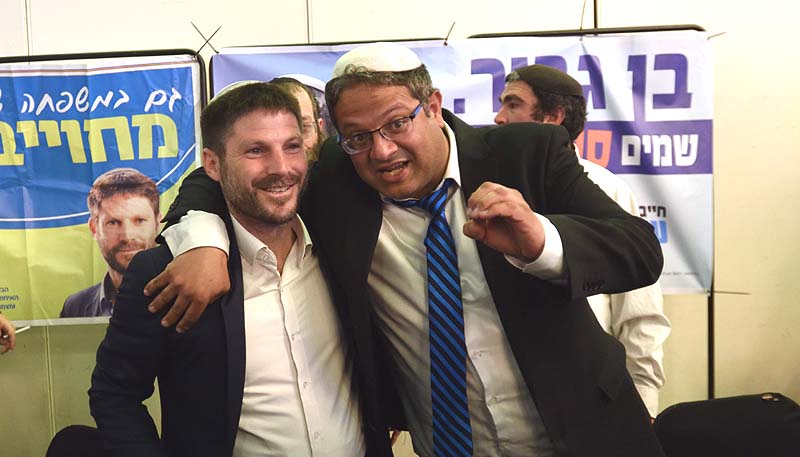 
What is the Religious Zionism coalition?

Religious Zionism is an extreme right-wing Israeli political coalition made up of three overtly racist, Jewish supremacist, homophobic parties: Religious Zionism, Jewish Power, and Noam. They united for the 2022 election campaign under deals brokered by former Prime Minister Benjamin Netanyahu, whose Likud party they are allied with.

As with almost all of the other Zionist political parties in Israel, the parties in Religious Zionism strongly support Israel’s illegal settlement enterprise on occupied Palestinian land and oppose Palestinian statehood or self-determination in any part of Palestine/Israel. The two main objectives of the coalition’s official 2022 platform are expanding settlements, including legalizing more than 100 so-called settlement “outposts” built without official Israeli government approval, and further restricting the ability of Palestinians to build homes on their own land in the occupied West Bank, which is already severely limited by Israel.

Religious Zionism is closely associated with Rabbi Dov Lior, who is something of a spiritual leader to Jewish Power. An influential former chief rabbi of the West Bank settlement where Religious Zionism leader Bezalel Smotrich and Jewish Power leader Itamar Ben-Gvir live, Lior is notorious for his virulent racism against Palestinians and other non-Jews and for being the spiritual advisor to generations of violent Jewish extremists. Among other things, Lior issued a religious ruling condemning Israeli Prime Minister Yitzhak Rabin as a traitor worthy of death before he was assassinated and counseled his killer; praised the US-born mass-murderer, also his student, who massacred 29 Palestinians in Hebron in 1994 as “a holier martyr than all the holy martyrs of the Holocaust”; repeatedly called for all Palestinians to be "cleansed" from Palestine/Israel; and described Arabs as "savages" and "evil camel riders”; In 2011, Lior was arrested on suspicion of incitement after he wrote a forward endorsing a book condoning the murder of non-Jewish civilians, including children. Lior is also one of the most prominent religious authorities encouraging messianic Jewish extremists to visit the flashpoint Noble Sanctuary Mosque complex in occupied East Jerusalem, threatening to spark a major religious conflagration in the region and beyond. During his victory speech on election night November 2022, Ben-Gvir called Lior to the stage and thanked him.

Established during the 2021 election campaign, the Religious Zionism party was previously known as the Tekuma party and is still officially named National Union-Tekuma.

In 2017, National Union-Tekuma released a plan calling for formal annexation of the occupied Palestinian West Bank, and for Palestinians living in Palestine/Israel to accept permanent subjugation under Jewish Israeli rule by relinquishing their “national aspirations” or voluntarily leave. The plan was aggressively promoted by current Religious Zionism leader Bezalel Smotrich, then a Knesset member with the Jewish Home party, who actually called it “the subjugation plan” and said it was intended “to erase all Palestinian national hope.” Under the plan, indigenous Palestinians who don’t accept permanent subjugation under Israeli military rule and resist their occupiers “will be determinedly handled” by the Israeli army “with greater force [violence] than at present and under more comfortable conditions for us,” according to Smotrich.

Founded in 2012, Jewish Power is made up of followers of the late New York-born extremist Rabbi Meir Kahane. Jewish Power has been called a “legal rendition” of Kahane’s Kach party, which was banned from Israeli politics in the 1980s due to its virulent racism and extremist policies. Those policies included introducing legislation calling for “taxes and slavery” for Palestinians and other non-Jews in Palestine/Israel and forced expulsion for those who don’t submit, with strict racial segregation between those who remain and their Jewish overlords. In 1994, Kach, the Jewish Defense League, and other groups established or inspired by Kahane were labeled terrorist organizations by Israel and the United States after one of his followers, a Brooklyn-born settler, massacred 29 Palestinians as they prayed in the historic Ibrahimi Mosque in Hebron in the occupied West Bank.

Jewish Power’s platform (Hebrew) calls for establishing “a national authority for encouraging emigration” of Palestinians. It also calls for: “War on Israel’s enemies [that] will be total and without negotiation, concession or compromise… The establishment of sovereignty over all parts of Eretz Israel liberated in the Six-Day War [the West Bank and Gaza] and settlement of the enemies of Israel in the Arab countries that surround our small land.” On the subject of “Government and ethics,” the platform declares “we do not want to lose the Jewish State through war, peace or Western democracy.

In 2019, Jewish Power leaders Michael Ben-Ari, Baruch Marzel, and Bentzi Gopstein were banned by Israel’s Supreme Court from running for the Knesset because of their long history of extreme racism and inciting hatred and violence against Palestinians and left-wing Israelis.

During the 2022 campaign, one of Jewish Power’s candidates was caught on hidden camera admitting that some minor superficial efforts the party made to appear less extreme were just a “trick” to avoid being disqualified from running for overtly promoting racism and violence.

Formed in 2019, Noam is a small ultra-Orthodox party known primarily for its homophobic views, with a platform focused on opposing LGBTQ rights and the “destruction of the family.” During the 2019 campaign, Noam ran an ad comparing followers of Reform Judaism, left-wingers, and LGBTQ people to Nazis.

In November 2022, days after the election, Israeli police opened an investigation into Noam’s spiritual leader, Rabbi Zvi Tau, following allegations from at least eight women that he sexually assaulted them, including when they were children. Over the years, Tau has repeatedly defended others accused and convicted of sexual assault.

Orit Strock, Member of the Knesset from the Religious Zionism party

Almog Cohen, Member of the Knesset from Jewish Power