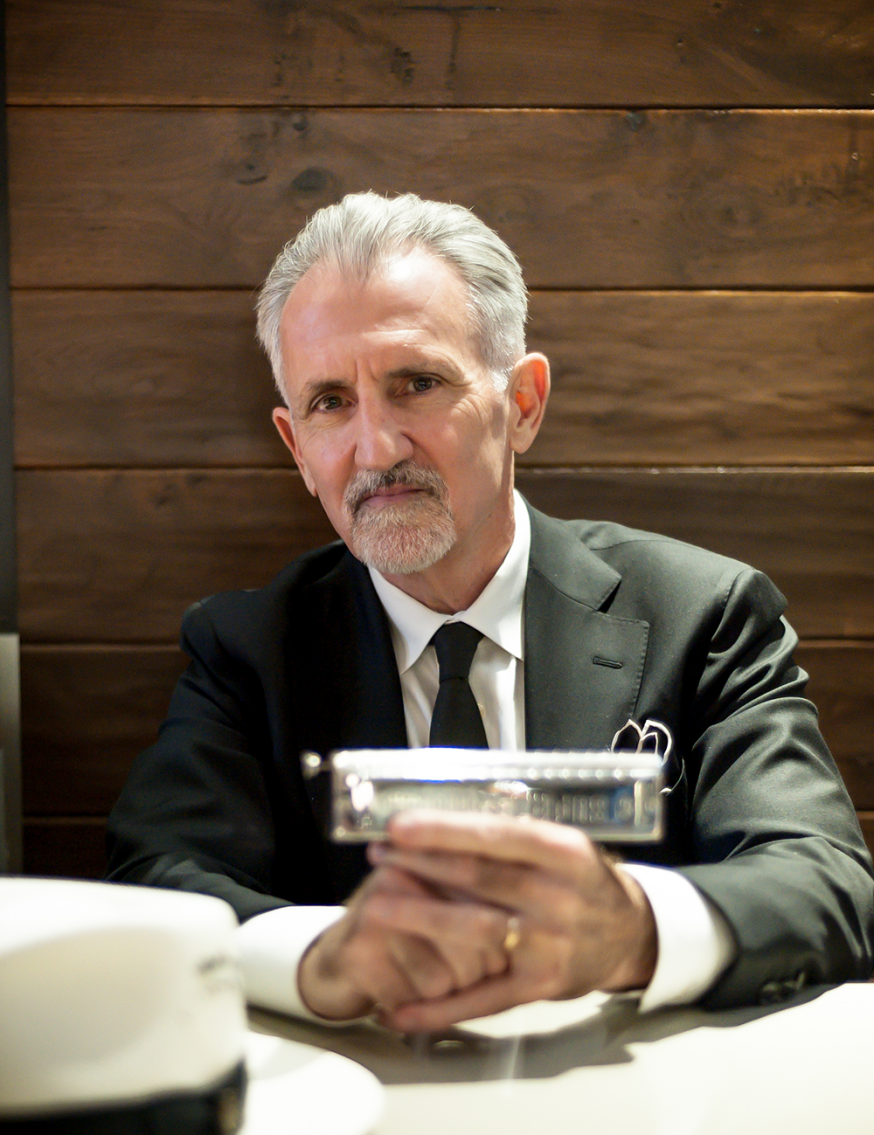 Playing under the moniker “Big Harp George,” Bisharat is known for pushing the boundaries of traditional blues, playing the chromatic harmonica--an instrument rarely featured in blues--as his lead instrument.

“Blues is a music of affirmation and assertion of life force under tough circumstances,” reflects Bisharat on the roots of blues. “As someone who is part of the Palestinian struggle for freedom, blues has always felt like a natural fit for me.”

"Being a member of a Palestinian family connected me to a bigger community. It was through family and friends that I learned firsthand about the perseverance of the Palestinian people in the face of adversity."

Music has always been an expressive outlet for Bisharat. By eleven, he had started singing in a band and by thirteen he had found his passion with the harmonica.

His newest album, Uptown Cool, confronts subjects ranging from social inequality to fake news. Bisharat uses lyrics with strong social commentary rooted in personal experience. One of the album’s more somber songs, “Cold Snap by the Bay,” addresses the contradictions of the Bay Area tech bubble and the subsequent emergence of stark disparities in wealth.

“In the tech world, there’s a lot of pride in the notion of disruptive technology as a positive, revolutionary thing,” contemplates Bisharat. “We don't pause to think about how it plays out negatively. For some, it creates wealth. For others, homelessness.”

Another song, “Alternative Facts,” is a parody about living in a post-truth world brought on by the Trump administration. While comedic, Bisharat addresses the dangers of a society that no longer cares about the truth. The chorus repeats, “Stupid me for thinking truth mattered, but in truth, it just distracts; and now I’m reaching my vast potential on alternative facts.” The song’s music video was released on July 1.

Bisharat’s music gained acclaim after his debut album, Chromaticism (2014), which was nominated for both Blues Music and Blues Blast Magazine awards for “Best New Artist Album.” His second album, Wash My Horse In Champagne (2016) also received high praise, described by one reviewer as “the standout recording of the year.”

Currently Professor Emeritus at UC Hastings College of Law, Bisharat has also worked with the Palestinian Legislative Council to develop and reform its judiciary system and still sits on the editorial board of the Journal of Palestine Studies.

His book, Palestinian Lawyers and Israeli Rule: Law and Disorder in the West Bank was published by the University of Texas Press and explores what it’s like for attorneys in Palestine to work under the conditions of a military occupation. Bisharat’s commentary has been published in the opinion pages of dozens of outlets, including The New York Times, Wall Street Journal, Washington Post, Los Angeles Times, San Francisco Chronicle, Houston Chronicle and The Nation.

Reflecting on his career and writing, Bisharat explains, “Fighting injustice is what inspires me professionally, personally and creatively through my legal career, as an educator and as a musician.”