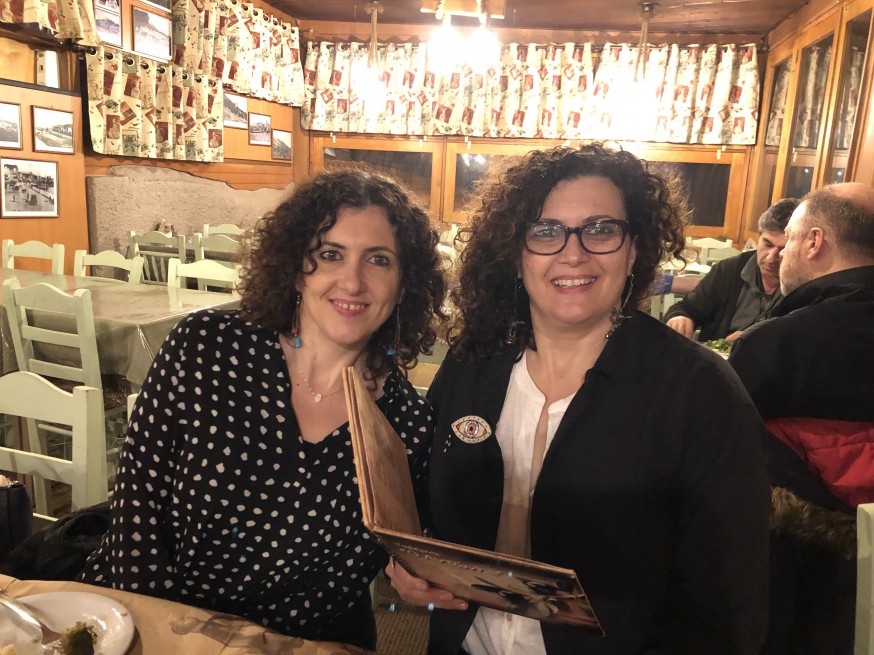 “Being Palestinian has everything to do with what we do.” Rita Lahoud and Sandra Bahhur, a special education teacher and a registered nurse respectively, are sisters who are accustomed to helping others. When the Syrian civil war broke out and the refugee crisis became the center of the world’s attention, Rita and Sandra could not sit idly by. Combining their skills, they founded Go Project Hope, a non-profit dedicated to providing refugees around the world with the medical and educational support they need not only to survive, but also to thrive. The organization started with a crowdfunding page that Rita and Sandra made to support an education center and medical center in the Elpida refugee home in Thessaloniki, Greece. Using the money from the page, Sandra bought much-needed medical supplies while Rita brainstormed lesson plans and recreational activities that would be both fun and useful for the children. Together, they set off to Greece to make Go Project Hope a reality.

Rita’s background as a teacher trained in special education plays a central role in her work with Go Project Hope. “As a special ed teacher you’re used to being patient in unexpected situations,” says Rita. “When you think of refugee children, most of them have experienced trauma and they bring that with them. Any program you create or teaching situation is a bit more difficult. My training helps me deal with that.” Similarly, Sandra’s nursing background has been crucial to her work with the project. “My 30 years of experience outside Go Project Hope help me inside the refugee camp medical centers. I’m able to anticipate the needs of the staff and patients.” One of Go Project Hope's latest initiatives is an engaging comic book—featuring a Kurdish superheroine named Azhar—that educates children about relevant health issues like lice and toxic stress, combining Rita and Sandra’s skills.

Rita goes a step beyond applying her teaching skills to the project; she also involves the students she teaches in Brooklyn, New York. Her students even helped come up with the name and logo design for Go Project Hope: “I had a contest with my students. Everybody got an index card and had to create a logo design for the project and submit a name. The final logo came from one student and the name “Go Project Hope” came from another.” Since the start of the project, Rita’s students in Brooklyn have helped put together the kits that are sent to the refugee camps and medical centers.

While the kits attend to a practical necessity—providing the refugees with toothpaste, toothbrushes, lice combs, and more—Go Project Hope also hosts a number of recreational activities in the camps, including music and movement programs, yoga and mindfulness workshops, and art expression classes. Rita finds that storytelling is very popular with the children. One story was particularly powerful for the children: that of  Kunkush, an Iraqi Kurdish refugee family’s cat that survives the perilous journey across the sea with them only to be lost once they arrive at Lesbos. Kunkush is eventually found and reunited with the family, who had since been relocated to Norway. The book, Lost and Found Cat, sets the story of Kunkush against the backdrop of the harsh realities refugees face when trying to flee to safety. “I read that story to all my students in Brooklyn, and then I went to Lesbos and read it. The kids were mesmerized—I even had 14-year-olds sitting there listening. When I asked the children whether they liked the book, they said, ‘Yes, because that’s our story.’”

Rita and Sandra have certainly had an impact on the children, but the process is not one-sided. Both sisters have learned and grown from their time with Go Project Hope. Marveling at the resilience and strength of the children, Sandra notes that, “the children still manage to smile and be kids. They want to play, they want to participate in projects and classes and storytelling. They’ll really gather around a lot of the recreational activities we do, and I find that so amazing when they’ve been through such struggles.” Rita agrees, adding, “I learned from the kids that no matter how young you are, you’re still capable of being an activist and caring and empathizing.”

Rita and Sandra currently have projects going in refugee camps in both Greece and Palestine, but they’re hoping to expand in the near future. “I want us to be able to provide more healthcare, more initiatives, as much as we can to as many refugees,” Sandra says. “There are so many people we have not even touched yet, we want to reach out to as many people as we can. We have a lot of people behind us, and we want to make sure we can take that to its fullest. Mental health is a big challenge, and that doesn’t go away, even after you’ve adjusted, so I really want to try to focus on the mental health and mindful initiatives—give these people resources they can carry with them wherever they go.” The sisters’ sights are currently set on growing within Palestine, as well as expanding into Jordan and Lebanon, and possibly even Bangladesh. In addition to expanding geographically, Rita and Sandra also wish to grow their curriculum to provide academic and recreational programs for special needs children and youth who are often left unserved.