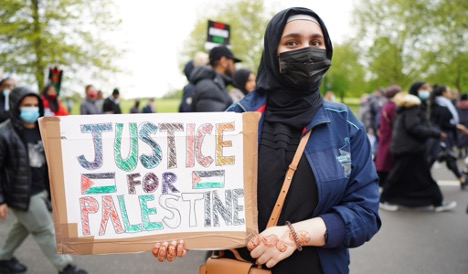 ISSUE: Policy-makers are being increasingly pressured to codify into law a controversial definition of antisemitism that is broadly opposed by civil rights and human rights organizations. The definition has drawn widespread opposition because its primary purpose is to police and silence political speech in support of Palestinian rights. This crackdown on freedom of speech violates the First Amendment rights of Americans to speak and act for freedom, justice, and equality for the Palestinian people. It also does a disservice to the principled fight against all forms of racism and bigotry, including antisemitism.

Proponents of the International Holocaust Remembrance Alliance’s (IHRA) definition are acting for the narrow purpose of protecting Israel’s violent apartheid rule over the Palestinian people rather than to create a world free of all forms of racism and bigotry.

In 2019, President Trump issued a controversial Executive Order directing federal agencies to “consider” this definition. However, earlier this month, the Department of Education’s Office for Civil Rights issued a fact sheet on protecting students from discrimination, which appropriately does not include the IHRA definition, the codification of which Kenneth Stern, the original lead author of the definition, regards as an “attack on academic freedom and free speech.” Nevertheless, anti-Palestinian advocacy groups are continuing their efforts to expand upon this Trump administration policy by codifying IHRA into law and suppressing political speech for Palestinian rights.

➡️ Members of Congress should not sign any Dear Colleague letter or cosponsor or vote for any legislation that attempts to codify into law or policy the IHRA’s definition.

➡️ Members of Congress should not sign any Dear Colleague letters or support calls for investigations into advocacy for Palestinian rights that rely on or reference the IHRA definition.

➡️ Codifying the IHRA definition of antisemitism could restrict the rights of Americans to engage in protected political speech critical of the policies of the Israeli government. For example, IHRA claims that stating “Israel is a racist endeavor” is a manifestation of anti-Jewish hatred. Such political speech could then be used as evidence of a hate crime were the definition to be codified in law.

Not only are Israel’s policies racist (to take one of many examples, its Nation-State Law explicitly denies self-determination to the Palestinian people), but they also constitute a system of racial domination–apartheid, a crime against humanity–as Palestinian, Israeli, and international human rights organizations such as Amnesty International and Human Rights Watch have documented in detail.

➡️ Proponents of IHRA want to turn the government into an Orwellian thought police to protect Israel’s violent apartheid rule over the Palestinian people. For example, in Virginia, Governor Youngkin’s appointed Commission to Combat Antisemitism recently encouraged the commonwealth to adopt the IHRA definition and pass legislation “prohibiting partisan political or ideological indoctrination in classrooms.”

➡️ Bad-faith initiatives to conflate criticism of Israel with antisemitism do a disservice to the principled fight against all forms of racism and bigotry, including antisemitism. Antisemitism is a dangerous reality in the United States, rooted in a white supremacist worldview whose adherents have become increasingly emboldened in recent years. This racist and bigoted white supremacy has targeted Black, brown, Asian-American, Jewish-American, and LGBTQ communities, to name a few communities impacted, with deadly violence.

We should all struggle together to end all forms of racism and bigotry, including antisemitism. However, Members of Congress should not be misled into supporting legislation and policy that seeks to censor political speech for Palestinian rights under the pretense of fighting antisemitism.

The International Holocaust Remembrance Alliance is an intergovernmental organization to promote Holocaust education, research, and remembrance. In 2015, it adopted a working definition of antisemitism and noted explicitly that it is “non-legally binding.” Because this definition was not meant to be codified into law, attempts to do so have been met with significant pushback.

For example, the lead drafter of the working definition, Kenneth Stern, wrote that it was “created primarily so that European data collectors could know what to include and exclude” when monitoring acts of antisemitism.

“It was never intended to be a campus hate speech code,” but a Trump administration Executive Order directing agencies to consider the working definition when evaluating Title VI discrimination claims, is “an attack on academic freedom and free speech, and will harm not only pro-Palestinian advocates, but also Jewish students and faculty, and the academy itself,” Stern argued.

In 2020, 122 prominent Palestinian and Arab academics, journalists and intellectuals signed an open letter, protesting that:

“The fight against antisemitism has been increasingly instrumentalized by the Israeli  government and its supporters in an effort to delegitimize the Palestinian cause and silence defenders of Palestinian rights. Diverting the necessary struggle against        antisemitism to serve such an agenda threatens to debase this struggle and hence to discredit and weaken it.”

In it, they argue:

“To level the charge of antisemitism against anyone who regards the existing state of Israel as racist, notwithstanding the actual institutional and constitutional discrimination upon which it is based, amounts to granting Israel absolute impunity. Israel can thus deport its Palestinian citizens, or revoke their citizenship or deny them the right to vote, and still be immune from the accusation of racism. The IHRA definition and the way it has been deployed prohibit any discussion of the Israeli state as based on ethno-religious discrimination. It thus contravenes elementary justice and basic norms of human rights and international law.”

Also in 2020, a group of scholars of Holocaust history, Jewish studies, and Middle East studies launched the Jerusalem Declaration on Antisemitism as an alternative to IHRA. It currently has more thatn 350 signatories. According to these scholars, examples of speech which are not antisemitic include:

Despite this significant pushback against the IHRA definition, its codification into law and policy remains a focal point of advocacy for organizations seeking to stifle political speech in support of Palestinian rights. As Palestine Legal notes:

“One of the primary tactics opponents of the movement for Palestinian freedom have used to silence political debate is the branding of all support for Palestinian rights as anti-Jewish. Roughly half of the incidents of suppression Palestine Legal responds to each year include false accusations of antisemitism, totaling 895 incidents from 2014 to 2020.

In an effort to add legitimacy to this tactic, Israel lobby groups have employed a distorted definition of antisemitism that encompasses virtually all criticism of Israel and have attempted to entrench this definition through policy changes and legislation.”