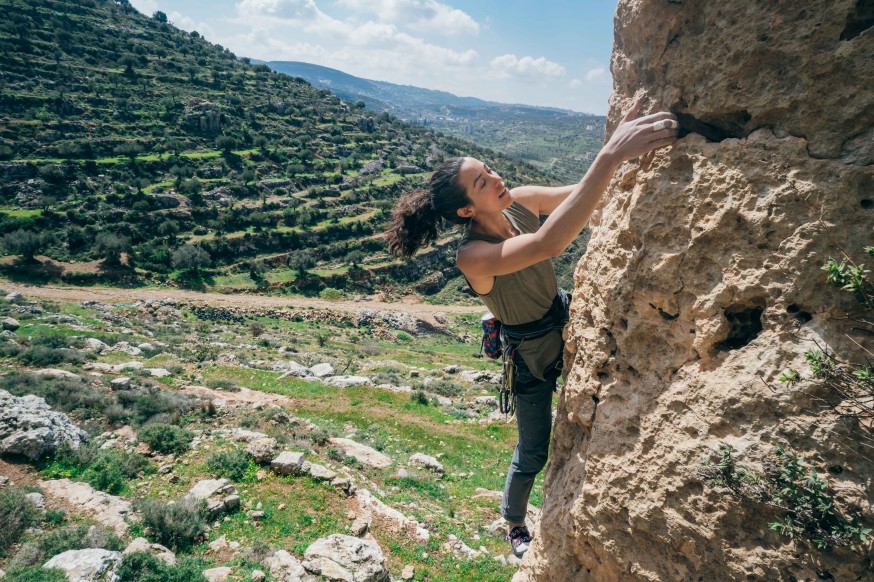 When Palestinian-American rock climber Miranda Oakley first stepped foot in a climbing gym, her sights weren’t set on breaking records or becoming famous in the climbing world. But in 2016, that’s exactly what happened when she became the first woman to climb the Nose of El Capitan solo in less than 24 hours.

Born to an American father and Palestinian mother, Oakley says she “grew up with a foot in each world.” Oakley felt like “the typical American kid,” but her visits to her mother’s family’s house “where everyone would speak Arabic and eat traditional Palestinian food,” as well as the Palestinian rights protests she’d attend alongside her parents, tied her to her Palestinian roots. In high school, Oakley began climbing. At first, she was just climbing in the climbing gym, but as time passed and she delved deeper into the sport, Oakley decided she wanted to move west to dedicate her time to climbing.

Now, Oakley is a seasonal guide at Yosemite National Park. Her job, which includes teaching classes, entails taking everyone from beginners to advanced climbers out climbing. On her own time, Oakley is traveling and smashing climbing records.

What drew her into climbing was “the idea of adventure,” but what led her to stick around was the incredible climbing community she found. Everywhere Oakley travels, she meets new climbing communities, new groups of people to fall back on during her one-woman travels. “It’s less intimidating for me traveling and climbing as a single woman when there’s such a good community. It’s like I always have a safety net."

It was that community that helped make Oakley’s climbing trip to Palestine an unforgettable experience. “As I grew up, I strayed from my Palestinian identity because it’s not the most popular subject to bring up, and it’s hard to talk about. When I heard about Tim Bruins and Will Harris developing climbing areas in Palestine and building a climbing gym in Ramallah, it made me really emotional, and inspired me to go and take the trip.” Oakley traveled to Palestine for the first time in 2017, quickly hitting it off with Palestinians there. “People were so welcoming and hospitable towards me. They really made me feel like one of the crew.”

Oakley has since returned to Palestine, and hopes to continue visiting in the post-pandemic world. Though coronavirus has put a pause on her international travel, Oakley has already collected a trove of trips under her belt, meeting diverse communities and forming lasting friendships. “My favorite part of climbing is where it’s taken me. There are a lot of places people wouldn’t go to if it weren’t for climbing—they’re kind of off-track and secluded. I love those unique and varied experiences. I’ve gotten to climb such a huge variety of things and places, and experience so many cultures through climbing. It’s given me so much perspective.”