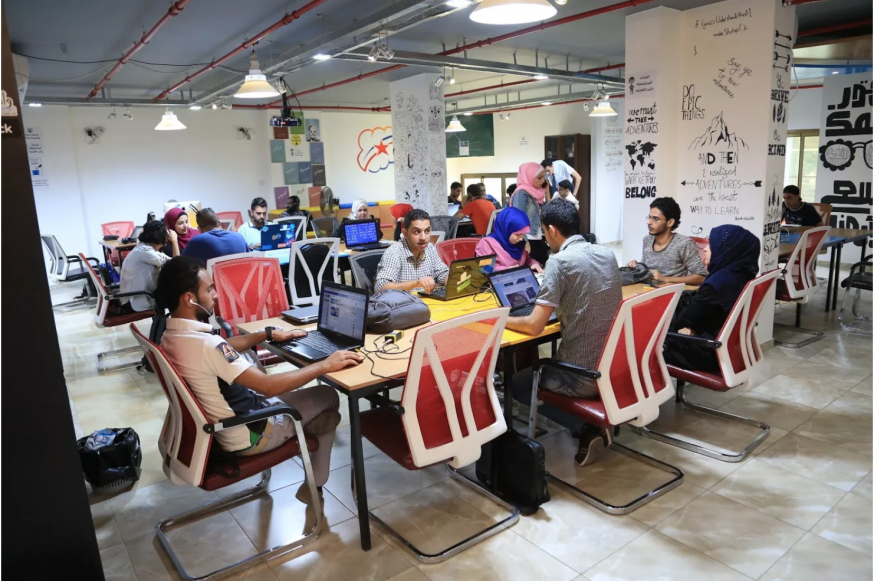 Mohammed Mortaga was at home in Gaza, Palestine watching a video about software engineering algorithms when the phone rang.

The news on the other end? At 21, he’d been selected as the first software engineer trained by tech hub Gaza Sky Geeks to join the team at Optimum Partners, a software development firm serving Fortune 500 clients and operating in Amman, Dubai, and New York City.

“There are no words to describe how happy I was,” Mortaga relays. “I still feel that happiness now.”

Born and raised in Gaza, Mortaga represents the beginning of a new partnership between the two organizations, in which young software engineers educated by Gaza Sky Geeks will be considered for rigorous internships and even full-time jobs with Jordan-based Optimum Partners. Mortaga was originally considered for the internship program, but Optimum Partners found him so capable that they hired him immediately.

The groundbreaking program affords talented young people from Gaza the opportunity to do work they love while honing important professional skills, a novelty in a place suffering from Israel’s illegal blockade and repeated bombings of the area. In Gaza, much of the water is undrinkable, there’s only electricity about eight hours per day, residents mostly aren’t permitted to leave, and the unemployment rate is the highest in the world. Based in Gaza City, Gaza Sky Geeks is a program of Mercy Corps and Google for Startups offering world-class coding and business acceleration programs in Palestine.

Designed differently than some other internship programs, the interns from Gaza will work on real teams and real projects. “There need to be opportunities for young people to put their will to succeed to work,” Optimum Partners co-founder and CEO Marco Gorin shares. Participants will also have the rare chance to temporarily leave Gaza, many for the first time, and work face to face with their colleagues at the Optimum Partners office in Amman. Upon completion of the three month program, they’ll be considered for full-time remote roles, like Mortaga’s, working from Gaza.

“One thing that’s not talked about enough with Gaza is the isolation,” Gaza Sky Geeks Executive Director Ryan Sturgill explains. Despite the limited electricity and damaged Gazan infrastructure, communication between potential interns and the Amman office is made possible by Gaza’s fiber internet connectivity and Gaza Sky Geeks’ reliable generator and battery banks that keep the connection humming. But access to the internet and free online courses to grow technical skills alone aren’t enough to compete in the global digital economy. “There’s no substitute for experience and in person experience in an office like this. When we were approached with this partnership, it was like a dream,” Sturgill explains.

The program was announced in early 2019 as part of Gaza Sky Geeks’ mission to empower the tech ecosystem of Palestine and Optimum Partners’ dedication to giving back with the business. Each year, dozens of Palestinians in Gaza will graduate and bring their skills back home.

The team certainly anticipates logistical challenges, though. Arranging for Palestinians to leave Gaza for the internship, usually prohibited but made possible in this case since Mercy Corps is involved, “is like getting stars to align,” explained Sturgill. Traveling from Gaza to Amman requires getting difficult approval from three different actors—the Palestinians in Gaza, Israelis, and Jordanians—and crossing through more than five military checkpoints. There are often significant obstacles along the way.

Over the next few years, Optimum Partners and Gaza Sky Geeks will slowly scale the program, graduating more and more participants. Meanwhile, Mortaga looks forward to venturing to Amman and working with others. Of why he loves the work, he shares, “It’s a never ending process of learning. You never stop learning.”