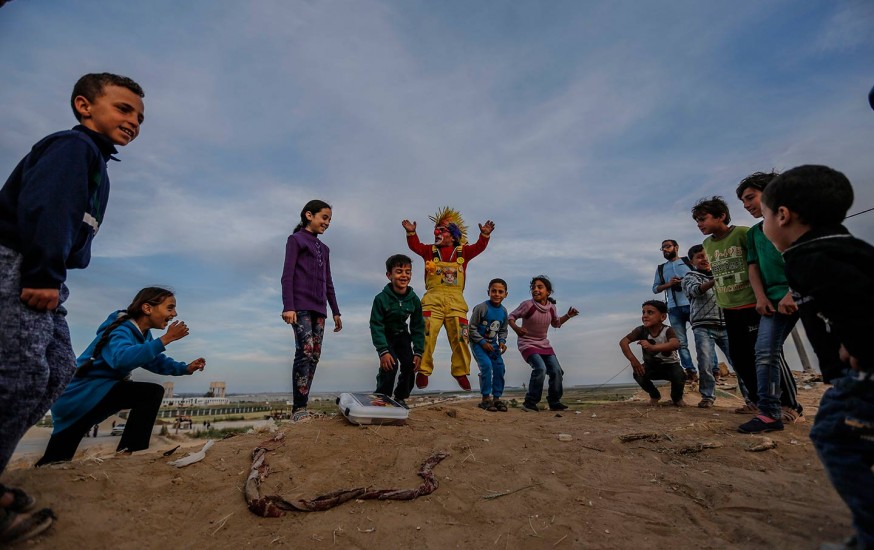 298: Total number of Palestinians killed by Israeli forces in the occupied Palestinian territories (the West Bank, East Jerusalem, and the Gaza Strip), according to the United Nations.

57: Total number of Palestinian children killed by Israeli forces in the occupied territories.

At least 180: Number of Palestinians killed by Israeli snipers during the Great Return March in Gaza, including at least one medic and two journalists, all of whom were clearly identified as press or medical personnel by their clothing when they were shot with live ammunition.

More than 29,000: Total number of Palestinians wounded by Israeli forces in the occupied territories, mostly in Gaza during the Great Return March. This is the largest number of Palestinians injured by Israel since the United Nations Office for the Coordination of Humanitarian Affairs began documenting casualties in the occupied territories in 2005.

459: Number of Palestinian homes and structures in the occupied West Bank and East Jerusalem seized or destroyed by Israel, mostly for being built without construction permits from Israeli authorities, which are almost impossible for most Palestinians to obtain. In some cases, Palestinians are forced to choose between destroying their own homes or paying a large fine for Israel to do it.

472: Number of Palestinians in the occupied territories displaced by Israel’s destruction or seizure of their homes, including 216 children and 127 women.

Approximately 1,000: Number of Bedouin Palestinian citizens of Israel to be evicted from their homes in Umm al-Hiran in southern Israel so their community can be destroyed and replaced with a town for Jewish Israelis, called Hiran.

In September, Israel’s Supreme Court approved Israel's destruction of the Bedouin Palestinian village of Khan al-Ahmar, which has existed in its present location since 1953, before Israel’s military occupation of the West Bank began in 1967. The impending destruction has been delayed following pressure from the international community, including the European Parliament, the UN, and the International Criminal Court, who have all warned that the destruction may constitute a war crime.

More than 13,000: Number of pending Israeli demolition orders against Palestinian structures in the West Bank, including 40 against schools.

265: Number of violent attacks carried out by Jewish settlers against Palestinians in the West Bank and East Jerusalem as recorded by the UN, an increase of 69% over 2017. These attacks killed one woman and injured 115 other Palestinians.

Nearly 8,000: Number of Palestinian trees vandalized and/or destroyed by Jewish settlers in the occupied West Bank and East Jerusalem, including 2,000 belonging to the villagers of Al-Mughayyir that were cut down over a two-month period and approximately 100 olive trees, some of oldest in the world, burned by settlers in the village of Huwara.

Human rights organizations have condemned the Israeli military’s failure to take settler violence seriously. According to B’Tselem: The Israeli Information Center for Human Rights in the Occupied Territories, Israeli soldiers and police “not only allow settlers to harm Palestinians and their property as a matter of course – they often provide the perpetrators escort and back-up. In some cases, they even join in on the attack.”

20%: Increase in the number of construction starts on settlement units in the first nine months of 2018 over the same period in 2017.

3,800: Number of tenders issued for new Jewish settlement units, the highest number since at least 2002.

5,618: Number of settlement units in the occupied West Bank and East Jerusalem that were advanced in the planning process, nearly half of which were approved in the last week of December 2018 alone.

Palestinian Political Prisoners in Israeli Jails (as of December 2018)

5,500: Number of Palestinians imprisoned by Israel.

480: Number of Palestinians imprisoned without charge or trial by Israel.

230: Number of Palestinian children imprisoned by Israel, including 41 under the age of 16.

More than 900: Total number of Palestinian children detained by the Israeli army during 2018.

The Great Return March in Gaza

Beginning in late March, Palestinians in Gaza, who have endured a crippling siege and naval blockade imposed by Israel for more than a decade, began weekly Friday protests as part of the Great Return March. Tens of thousands of demonstrators, including families and children, called for an end to the siege and for the realization of the legal right of return of Palestinian refugees expelled from their homes and land in what is now Israel. (About 1.3 million of the nearly 2 million Palestinians in Gaza are refugees, expelled from their homes in what became Israel in 1948.) In response, Israeli snipers shot and killed at least 180 protesters over the course of the year and wounded more than 23,000 others, prompting outrage around the world and condemnation from human rights organizations.

Trump Moves US Embassy to Jerusalem

On May 14, the Trump administration moved the US embassy to Israel from Tel Aviv to Jerusalem, breaking with more than 70 years of US foreign policy and the position of the international community not to recognize the sovereignty of any country over Jerusalem in the absence of a permanent regional peace agreement. In response to protests against the move, Israeli soldiers killed at least 60 Palestinians who were taking part in the Great Return March in Gaza on the day the embassy opened, wounding thousands more.

In July, Israel’s Knesset (parliament) passed the so-called “Jewish nation state” law. It formalizes in Israel’s quasi-constitutional laws the superior rights and privileges that Jewish Israelis enjoy over indigenous Palestinian citizens of Israel, who comprise about 20% of the population. Amongst other things, the law stipulates that the right to self-determination in the State of Israel “is unique to the Jewish people,” directs the government to “encourage and promote” the establishment of “Jewish settlement” as “a national value,” effectively legalizing segregated communities that bar non-Jews, and omits any reference to equality. It was widely condemned as codifying a racist system of apartheid in Israel and the occupied Palestinian territories.

Starting in early 2018, President Trump cut hundreds of millions of dollars in funding to the UN agency responsible for the well-being of Palestinian refugees (UNRWA) and USAID humanitarian projects in the West Bank and Gaza, in an attempt to force Palestinian leaders into returning to negotiations with Israel’s hardline right-wing government. In September, Trump ordered the closing of the Palestine Liberation Organization’s diplomatic mission (the de facto Palestinian embassy) in Washington, DC.

Over the course of 2018, senior Trump administration officials drafted a diplomatic plan for Palestine/Israel. Although details have not been made public yet, according to what has been reported in the media it will likely resemble plans previously proposed by the Israeli right, leaving Israel in control of millions of disenfranchised Palestinians indefinitely while granting them a limited degree of local autonomy in fragmented parcels of land surrounded by Israeli walls, military checkpoints, and illegal Jewish settlements.

Those previous plans include Israeli Prime Minister Benjamin Netanyahu’s so-called “economic peace” plan, in which Palestinians are expected to abandon their demands for freedom, equality, and self-determination in exchange for economic inducements, and the so-called “Jordan option,” whereby Israel retains military control over the West Bank and/or Gaza while pawning off responsibility for the Palestinians living in the those territories to Jordan and/or Egypt, respectively, as part of some sort of confederation.

The plan is being drafted by Trump’s son-in-law and advisor, Jared Kushner (a close family friend of Netanyahu since childhood), Trump’s advisor on international negotiations, Jason Greenblatt, and US Ambassador to Israel David Friedman, all of whom are supporters of Israeli settlements built on occupied Palestinian land in violation of international law and longstanding official US policy.

Emboldened by the Trump administration’s staunch support for Israel’s extreme right-wing government, messianic Jewish fundamentalists (including senior government officials) continued to make provocative visits to the historic Noble Sanctuary mosque complex (Haram al-Sharif) in occupied East Jerusalem and to advance their plans to build a Jewish temple on its grounds, including holding a ceremony in December that was attended by the ambassadors of Guatemala and Honduras to Israel.

In May, US Ambassador to Israel David Friedman was photographed being presented with a poster of an aerial view of Jerusalem with a large Jewish temple in place of the Noble Sanctuary. Although the US embassy subsequently downplayed the incident and claimed he had not noticed that the Al Aqsa mosque and Dome of the Rock shrine had been removed from the picture, Friedman is known for his extreme positions on Palestine/Israel and as a hardcore supporter of Israel’s illegal settlement enterprise, including heading an organization that raised millions of dollars for Beit El, one of the most radical settlements in the West Bank.

In 2018, Israeli restrictions on the Palestinian economy continued to cause severe hardships for Palestinians in the occupied territories, particularly in Gaza. In September, the UN issued a report condemning Israeli policies as a form of “de-development,” and noting that Gaza’s unemployment rate was the highest in the world, at 27.4%. The same month, the World Bank issued a report warning that Gaza’s economy is collapsing as a result of Israel’s illegal, decade-long siege of the tiny coastal territory, which has been condemned as a form of collective punishment by the UN and human rights groups. According to the report, Gaza’s economy contracted by 6% in the first quarter of 2018, with youth unemployment standing at 70% and half of its residents living in poverty.