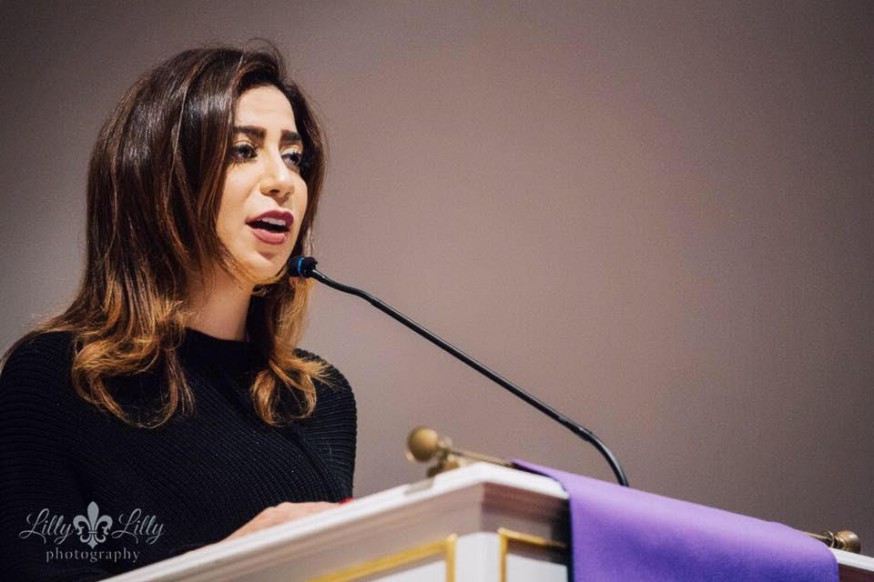 Rasha Mubarak is a powerhouse grassroots activist bringing the fight for Palestinian freedom into mainstream U.S. electoral politics, known among her peers for her hard work, dedication, and integrity.

Raised in the heart of central Florida, Mubarak was the last of five children. Her parents, who are from Hizma and Beit Hanina in Jerusalem, were always active in the political scene, leading Mubarak to be engaged from a very young age. “I mobilized in high school, on the weekends, whenever I had time—I thought everybody did that.” After college, where she studied molecular biology and microbiology, Mubarak worked for various civic engagement and civil rights groups. “A lot of my work started off as Palestine activism. When you see one injustice around you, you’re exposed to other injustices, and from Palestine activism I became active in these other fights for vulnerable and marginalized communities.”

From there, Mubarak soon entered the realm of electoral politics. “When I leaned into civil rights work, I learned that a lot of people were able to make these harmful decisions because of who was in political power. The Arab community in Florida, we were electing people and donating campaigns, but what I still see to this day is that they take our votes and our money, but do not uplift our voices. So then what does collective power look like? How do we hold these elected officials accountable?” It was these questions that led Mubarak to delve deeper, committing her time and energy toward electing people who will uplift and share the voices of the most disenfranchised communities.

Now, Mubarak works full-time fighting injustice across various spheres. She is the Florida Young Democrats National Committee Woman, using her position to “inject movement and people power” into the Democratic party in Florida. She’s been on the receiving end of much hatred and vitriol for her work empowering communities and speaking up for Palestine, but she refuses to bow out. “There’s no doubt that there’s a strong dislike of me in the Democratic party because of my consistent stance on human rights inclusive of Palestinian rights, but when you build relationships—and this is why relationships are so important—people start to listen and understand. Sometimes it’s about teaching our allies how to show up. It’s been hell.”

But the flack Mubarak has received due to her outspoken advocacy for Palestine hasn’t been limited to the right or establishment spaces—she’s received it from progressive organizations as well. “People in progressive orgs were trying to push me out because of the fear of being associated with me. You expect that from the right and from the Democratic establishment, but not from people you fought in the street with, so it was a lot for me to handle.” When Rashida Tlaib and Ilhan Omar were elected in 2018 and viciously attacked for their identities and political positions, many national organizations stood up for them. It was then that people around Mubarak realized they should have been there for her. Still, her commitment has never wavered. “For me, it is never a question of being less Palestinian on any day. It is tiring and exhausting being marginalized even within progressive spaces, but you have the people who show up for you, who show up for your community. Understanding your support system is important. There’s so much power and pain, but there’s also so much growing.”

Mubarak’s support system is very much based in community, which she considers a huge part of her life. “Community is so important to me because it embodies who I am. It’s up there with my family and my spirituality.” Defining what exactly community is, Mubarak says “community is a support system that can be as small or as big as you want it. When you’re in community, you’re in relationships with people who share values and struggles and a dream of a better world and working toward achieving it. A community can be your neighborhood, your local masjid or church or synagogue, your group in high school. Community is a support system that shows up for each other, and knows how to show up for each other.”

To stay true to her commitment to community, Mubarak founded her own LLC in February called Unbought Power. The push to form Unbought Power came after the 2018 gubernatorial race in Florida, where Andrew Gillum was initially seen as a great progressive champion until he moved to the general and picked up anti-Palestinian rhetoric. “Our community [Palestinians] is often left behind and marginalized, and I felt that in that moment as a Palestinian, I didn’t want to be a part of any of those electoral processes if it meant leaving behind my values. So I started the LLC to do all of the trainings and consulting and still stay true to what I believe in.” Through Unbought Power, Mubarak is still connected to electoral campaigns, but now on her own terms. One of her most notable clients is fellow Palestinian Rashida Tlaib, for whom she works as a finance director. “It’s such an honor to work with Rashida, there’s so much humility. She exemplifies what it means to be a part of movement and an organizer and activist roaming the halls of Congress. She’s always willing to speak truth to power. Her decisions aren’t based on electability, they’re based on what the people’s needs are. She understands Congress is a tool in serving these communities. It’s really like working with a sister and a friend, but also an advocate and an activist in the workspace, which is so unconventional and unseen and sets her apart from others.”

In using channels like Congress, Mubarak is working toward her ideal world. “Electoral politics are just another avenue toward liberation, just one aspect. There’s still people in the streets, still activism. It’s just so important that we are injecting movement into legislative power. By doing that, by electing people that share our values and center the most vulnerable, that’s how we’re gonna help craft this new far left. People like AOC and Rashida, they come from movement work, it’s so important to have more of that.” In creating a “new far left,” as she calls it, Mubarak is pushing for a world that’s “free of exceptionalism in human rights, that’s equitable, where people don’t have to work three jobs to pay to just live. A world that isn’t based on your economic status, your race, your religion, your gender, your sexuality, where you happen to be born. A place we’re deeply grounded in, where you can live your dreams without the debilitation and restriction of governments that suppress you because of how you look or where you were born or how you choose to pray. A world where women can walk in the streets at night and feel safe, where children can go to school and all have the same opportunities. A world where you can actually live out your dream, that’s free of violent regimes. We are going to dismantle racist structures and give people the chance to actually live.”