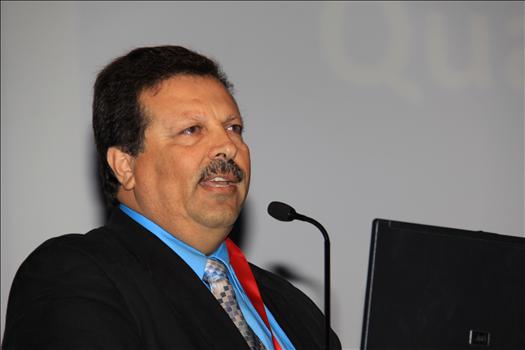 Palestinian-American inventor and nuclear scientist Dr. Reyad Sawafta is founder and Chief Executive Officer of the North Carolina-based QuarTek Corporation, a nanotechnology company that Sawafta describes as "a company dedicated to introducing innovations for the benefit of mankind." One such innovation is the creation of products that use nanotechnology to provide safe drinking water for disadvantaged communities by converting contaminated water into drinkable water in minutes. Sawafta's company has also pioneered the creation of biodegradable plastic bottles made from food products. Sawafta holds numerous patents and is the author of more than 150 scientific papers.

Born in the village of Bardala and raised in the Palestinian city of Tubas, Sawafta became a refugee in 1967 when his family was forced from their home and fled to Jordan. Months later they were smuggled back into Palestine where he finished his high school education before returning to Jordan to study physics at Yarmouk University. In 1987 he earned his PhD in Nuclear Physics from the University of Alberta. Sawafta started his career teaching at Indiana University in Bloomington but soon left the University to join the U.S. Department of Energy as a Nuclear Scientist. He went on to help establish the graduate program in physics at North Carolina A&T University while at the same time working with the Department of Energy's Thomas Jefferson National Accelerator Facility in Virginia.

Sawafta says he "never forgot the horrors of war and the indignities of life under military occupation." As a result he is determined to use his success in science and business to benefit the Palestinian community. His latest endeavor is Invent for Palestine, a project he founded to encourage scientific innovation by inviting Palestinian college and high school students to submit ideas for inventions that improve the quality of life in Palestine and other underprivileged communities. His company, QuarTek, will help the young inventors patent and market their ideas.

When asked about the source of his drive Sawafta said, "because I am Palestinian, I always strive to portray the best possible image I can and yet, I always feel like there is more to be done. I want to show that despite all hardship we are a people who believe in education. When you ask Americans about Palestinians, the first thing that comes to their minds is not one of science and technology and I want to change that image."