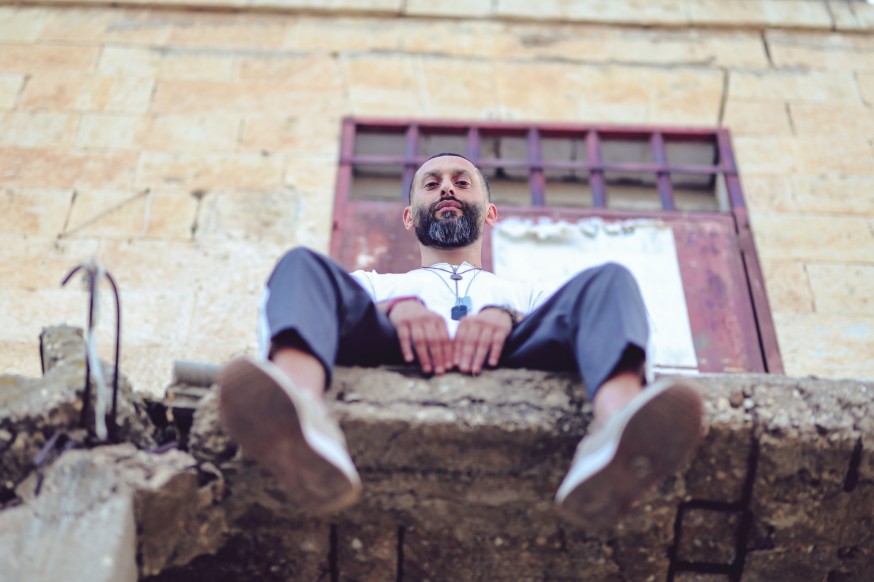 “A shekel and a dream and a dictionary.” That’s all Tamer Nafar had when he started out. Now, he’s one of the biggest Palestinian musicians, the godfather of the Arabic hip hop scene, and an actor, scriptwriter, and (by his own admission) “just a cool guy.”

Born and raised in Lydd, Tamer’s life was shaped by the city. In Lydd, crime rates are high, and the cruel hands of violence and poverty touch all Palestinian residents in one way or another. The Palestinian-Arab neighborhoods are neglected by Israel, left to fend for themselves, and in that harsh environment Tamer found solace in music. “Lydd was the reason why I’m in love with hip hop,” he says. “As Lydd became the biggest drug market in the Middle East, as police brutality and crime increased, I lost a lot of friends. That made me turn to hip hop, it took me to that side of music that I hadn’t explored before.”

Although his English wasn’t the best, Tamer connected with the visuals that hip hop was presenting. “What I was seeing in those music videos, it looked like my neighborhood. The Holler If Ya' Hear Me video by 2Pac, for example: it starts with the cops taking a young black kid to the car and he’s handcuffed. It just looked like my neighborhood--the sirens, the kids being arrested. I didn’t know what he was talking about, I couldn’t understand the lyrics yet, but I could imagine it. It connected me to my reality; it helped me express my own life and what was happening. I had the feelings and the anger and emotions before, but through hip hop, I started finding the verbs.”

Tamer got himself a dictionary and started translating the lyrics he was hearing. “Maybe eighty percent of the words I couldn’t find because they were slang, but I got there. I taught myself.” He began writing his own lyrics in English, expressing his personal experiences through rap, doing what no one around him was doing. At first, the process was difficult. “This was in ‘98. I tried to find producers, but it was all wedding producers. There weren’t beats easily accessible like they are today. There just wasn’t the foundation to make hip hop music, so it was very, very, very hard.” So Tamer improvised: he downloaded the instrumental versions of famous songs and started to rap over them. “My first singles were all sung over known beats; it wasn’t until around ‘99, 2000 that I started finding producers and making my own beats.”

It was around that time that Tamer discovered just how much the Israeli hip-hop scene was growing. “It was underground, and they were producing their own stuff and kicking. I was shocked that the scene was so developed.” Before long, Tamer began working on raps in Arabic, carving out a new genre. It was that innovation, those Arabic raps, that made him the star he is today.

Although he had entered the hip-hop scene and grown up under the harsh conditions of Israeli apartheid, Tamer didn’t set out to be political when he started making music. “For me, starting out, I was very ‘f--- the police,’ more focused on Lydd than Palestine. I was looking to be an artist, I wasn’t looking for an identity back then. It wasn’t until later, after the Second Intifada started, that I started talking specifically about being Palestinian. At first, I was just happy to be in a room with lights and a good microphone.” When the intifada broke out and Palestinians were openly being killed, Tamer went to a show in Tel Aviv and let his feelings air via a song titled Innocent Criminals. The club’s reaction was less than enthused. “It went nuts in there, people started fighting. That was when it hit me: it’s okay for me to be nice and a gardener or a mechanic or the guy who delivers hummus, but if I stop and say, ‘The garden I’m working on, it was my grandfather’s,’ then these people were no longer my friends. That night gave me this feeling that I wanted to be more political.” The song he sang, and the attention it got, brought a certain attention and responsibility to Tamer. “People started to invite me to political events, and I started participating in that side of things. Life is a process.”

But even with his forays into politics, Tamer’s music exists across a host of themes and topics, ranging from love to poverty. His work is not limited to the confines of occupation, though as a Palestinian, he is often reduced to solely his identity as a victim of apartheid. “The message I’m getting artistically is that I only exist because of the occupation. No. It’s not that we, as Palestinians, need the occupation for our drive. It’s actually the opposite--the occupation is just keeping us from being bigger, from going international. The occupation will never be my motivation; it’s not inspiring. I exist outside of Israel torturing me.” His biggest hits, he says, are not his political songs, but even still, foreign media focuses on those that are. With new Palestinian rappers emerging, this hyperfocus on specific aspects of Palestinian life can be extremely limiting.

As the OG Arabic rapper, Tamer’s watched a lot of new blood rise and carve out their space in the scene. He’s inspired by the younger generation and all the new music they’re putting out. One young rapper, in particular, caught his eye: Gaza’s viral phenomenon MC Abdul, whose accent and flow impressed Tamer. “I first found out about him from an Instagram post, and I was like what? Who is that kid? He was just so good.” He reached out to MC Abdul, whose real name is Abdel Rahman Al-Shantti, to offer up a song for collaboration, and thus their latest hit “The Beat Never Goes Off” was born.

The song took a bit of time to perfect given that Tamer was writing lyrics for a 12-year-old to sing, but afterward, Abdel Rahman continued to impress. “It took a while for me to figure out how to write for a kid, but when I finally sent him the song, he recorded it 30 minutes later and did it way better than I had done it. His flow, his delivery--it was dope.” When he went to the studio, Tamer was originally looking for a more sad, mellow beat, but it just didn’t work. The song demanded a more upbeat track. “Our energies forced us to do an energetic song. And you know, I was bragging for months, a guy from Lydd and a guy from Gaza did an energetic song, not a sad song!” Though the song has a sadness to it--singing about tank attacks isn’t exactly happy--it also has a resounding energy.

“The Beat Never Goes Off” dropped in September, and the visuals of the music video are striking. Tamer stands in a Palestinian city in the occupied West Bank, rapping in front of the Israeli apartheid wall that separates Palestinian families from one another. MC Abdul, filmed in Gaza, is projected onto the wall behind Tamer. The effect provokes both the unity of the Palestinian people and their forced separation and displacement as the two rap about occupation and the unwavering Palestinian spirit.

After decades in the scene, Tamer is still finding new and exciting ways to be inspired and create music. His advice to Palestinians trying to make it? “Just don’t hesitate. Don’t overthink, just go all the way. You’re going to make mistakes, and if you don’t, people will find mistakes. We’re living in a place where every move is being judged. That can create a self-policing system in your head. There is no such thing as a halfway artist, just go all the way. If you pick being provocative, don’t hold back; if you pick wedding songs, be the best at that. Be whatever you choose to the fullest--that’s something I needed to hear when I was starting out.”

Tamer is currently working on new music, with his next track set to be released sometime in the coming weeks. The song, named “GoTTer” after British colonial slang, is his first drill track. “It’s bouncy and it’s rough and hard--it’s a new flow. I really like what the new generation is doing. I was very inspired by the people who were inspired by me, it’s like a cycle.” Until “GoTTer” drops, you can stream “The Beat Never Goes Off'' on all major music platforms and watch the music video here.