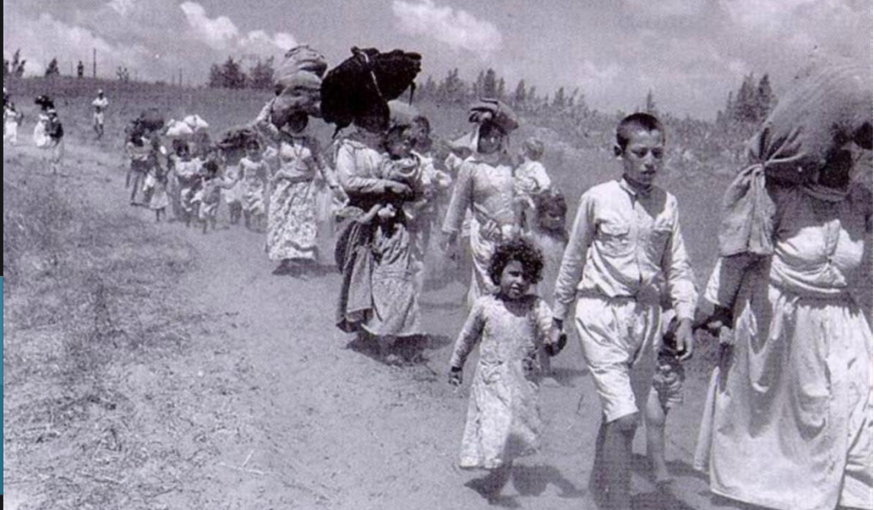 "We thought it would be a matter of weeks, only until the fighting died down. Of course, we were never allowed to go home." Nina Saah, Washington, DC

"Those of us who left unwillingly in 1948 are plagued with painful nostalgia. My house in West Jerusalem is an Israeli nursery school now." Inea Bushnaq, New York, New York

"The people of New Orleans woke up one morning to complete devastation and had to flee. The Nakba was our Hurricane Katrina." Abe Fawal, Birmingham, Alabama

Sixty years ago, approximately 750,000 Palestinians lost their homes and belongings, their farms and businesses, their towns and cities. Jewish militias seeking to create a state with a Jewish majority in Palestine, and later, the Israeli army, drove them out. Israel rapidly moved Jews into the newly-emptied Palestinian homes. Nakba means "catastrophe" in Arabic, and Palestinians refer to the destruction of their society and the takeover of their homeland as an-Nakba, "The Catastrophe."

TEN FACTS ABOUT THE NAKBA

1. The Nakba is a root cause of the Israeli/Palestinian problem.

It is marked on May 15, the day after Israel declared its independence in 1948.

By the end of 1948, two-thirds of the Palestinian population was exiled. It is estimated that more than 50% were driven out under direct military assault. Others fled as news spread of massacres committed by Jewish militias in Palestinian villages like Deir Yassin and Tantura.

3. Jewish leaders saw "transfer" as an important step in the establishment of Israel.

Jewish leaders spoke openly of the need to use military clashes to expel as many Palestinians as possible before other Arab countries could come to their defense. The Haganah militia's Plan Dalet was the blueprint for this ethnic cleansing. Israel's first Prime Minister, David Ben Gurion, said "We must use terror, assassination, intimidation, land confiscation, and the cutting of all social services to rid the Galilee of its Arab population." (See what other leading Israelis have said about transfer.)

4. Hundreds of Palestinian villages and towns were destroyed.

Jewish forces depopulated more than 450 Palestinian towns and villages, most of which were demolished.

The newly-established Israeli government confiscated refugee land and properties without respect to Palestinian rights or desires to return to their homes.

Israeli historian Tom Segev reported that: "Entire cities and hundreds of villages left empty were repopulated with new [Jewish] immigrants... Free people - Arabs - had gone into exile and become destitute refugees; destitute refugees - Jews - took the exiles' places in the first step in their lives as free people. One group [Palestinians] lost all they had while the other [Jews] found everything they needed - tables, chairs, closets, pots, pans, plates, sometimes clothes, family albums, books radios, pets....

6. Some Palestinians stayed in what became Israel.

While most Palestinians were driven out, some remained in what became Israel. Although citizens of the new state, they were subject to Israeli military rule until 1966. Today, Palestinian citizens of Israel comprise nearly 20 percent of Israel's population. They have the right to vote and run for office, but more than 20 Israeli laws explicitly privilege Jews over non-Jews. Nearly one-quarter of Israel's Palestinians are "internally displaced" persons, unable to return to the homes and lands that were taken from them.

7. There are still millions of Palestinian refugees dispersed around the world.

Today, there are 4.4 million Palestinian refugees registered as such with the United Nations, and at least another estimated 1 million who are not so registered. Thus a majority of the Palestinian people, around 10 million persons, are refugees.

All refugees enjoy internationally-recognized rights to return to areas from which they have fled or were forced out, to receive compensation for damages, and to either regain their properties or receive compensation and support for voluntary resettlement. This right has been explicitly acknowledged in recent peace agreements in Cambodia, Rwanda, Croatia, Bosnia-Herzegovina, Guatemala, Northern Ireland, Kosovo, Sierra Leone, Burundi, and Darfur. This right was affirmed for the Palestinians by the United Nations Resolution 194 of 1948. Israel, however, does not allow Palestinian refugees to return, although a Jew from anywhere in the world can settle in Israel.

An overwhelming majority of Palestinians believes that refugee rights must be fulfilled for peace between Palestinians and Israelis to endure. And according to an August 2007 poll by the Jerusalem Media and Communications Center, nearly 70 percent believe that refugees should be allowed to return to "their original land".

10. The Nakba has implications for Americans.

Israel's ongoing denial of Palestinian rights - and unconditional U.S. financial and diplomatic support for Israel - fuels anti-American sentiment abroad. A 2002 Zogby poll, conducted in eight Arab countries showed that "the negative perception of the United States is based on American policies, not a dislike of the West." The same poll showed that "the Palestinian issue was listed by many Arabs among the political issues that affect them most personally." Resolution of the Palestinian refugee issue would undoubtedly improve America's international image, by proving that the U.S. government supports the consistent application of international law.