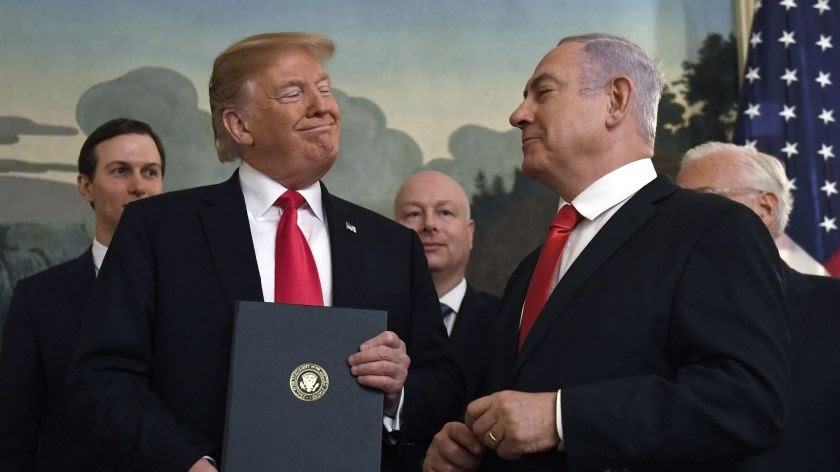 1. Broke with seven decades of US policy and the international community by recognizing Israeli sovereignty over Jerusalem, including the occupied Palestinian eastern portion of city, and moving the US embassy there, denying Palestinian rights to the city.

2. Declared that Israeli settlements built on occupied Palestinian land in flagrant violation of international law are not illegal.

3. Supported Israel’s killing of hundreds of unarmed Palestinians in occupied and besieged Gaza as they protested for their freedom and rights.

4. Reneged on US aid commitments, cutting virtually all humanitarian aid to Palestinians, including funding for hospitals and the UN agency helping Palestinian refugees survive.

6. Brokered "normalizing" deals between Israel and other authoritarian regimes in the region promoting a charade of "peace" as cover for Israel's ongoing oppression of Palestinians, part of an effort to give Israelis the benefits of peace without them granting Palestinians their freedom or rights.

7. Issued an executive order smearing Palestinian-American student activists and their allies in an effort to suppress their work supporting Palestinian human rights.

8. Attacked and smeared the grassroots boycott, divestment, and sanctions campaign for Palestinian rights, threatening US funding for groups, including human rights organizations, that support it.

9. Closed the de facto Palestinian embassy to the US.

10. Closed the US consulate in occupied East Jerusalem, the de facto US embassy in occupied Palestine.