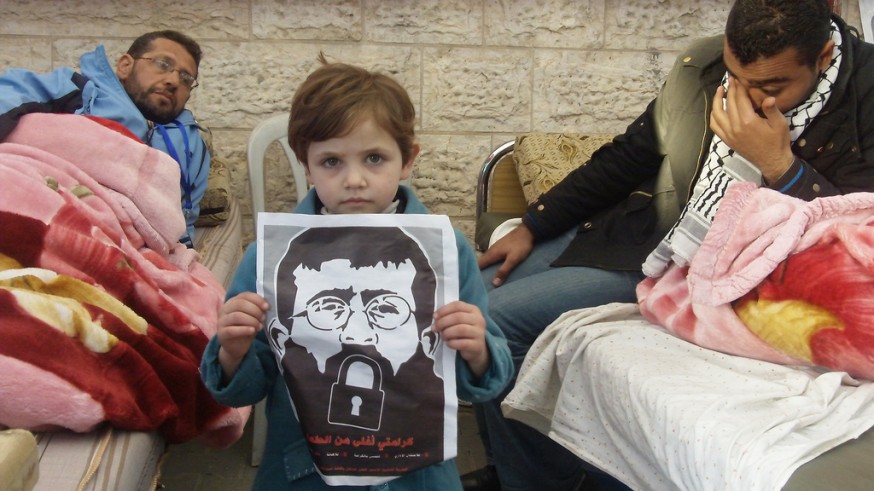 On December 17, 2011, Israeli soldiers arrested 33-year-old Khader Adnan, a baker and master's candidate in economics at Birzeit University, in the middle of the night at his home in the town of Arraba, near Jenin, in the occupied West Bank. ***image2***Although Israeli authorities have accused the husband and father of two young children of being a member of the militant group Islamic Jihad, they have refused to charge him with a crime or share the secret evidence they claim to have against him. Instead, he's being held in "administrative detention," which allows for the indefinite imprisonment of suspects without charge or trial, a procedure that has been roundly condemned by Israeli and international human rights organizations. To protest the conditions under which he and other Palestinian detainees and prisoners are being held, Adnan has been on a hunger strike since he was first detained, now totaling 58 days as of February 13. Adnan, who is believed to be the longest hunger-striking Palestinian detainee, is refusing all food and liquids except water. As is commonly the case for Palestinian detainees and prisoners in Israeli jails, he has been subjected to prolonged periods of interrogation and isolation, as well as physical abuse and unsanitary conditions. Numerous international and human rights bodies have denounced Israel's treatment of Khader Adnan and its practice of administrative detention, including Amnesty International, Human Rights Watch, the UN Special Coordinator for the Middle East peace process, and the eleven organizations comprising the Palestinian Council of Human Rights Organizations. Since his hunger strike started, Adnan has lost 42 kilos (92.4 pounds). A recent examination by Physicians for Human Rights - Israel assessed his life to be at risk. Adnan has refused health examinations by prison officials, and Israel has denied him further access to independent medical personnel. Shackled to a bed in Ziv Hospital inside of Israel, Adnan's two young daughters and pregnant wife have only been permitted to visit him twice. On February 2, Palestinian prisoners in three different Israeli jails began hunger striking in solidarity with Adnan, while his father began a hunger strike on February 6. Palestinian Prisoners in Israel: