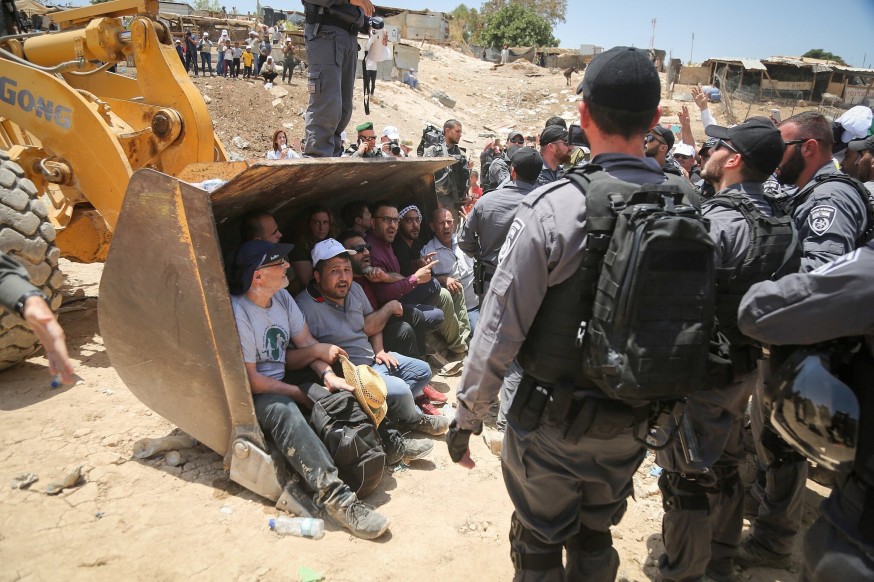 Why is E1 so controversial?

“[The E1 area currently] provides a vital passage between the northern and southern West Bank. Should Israeli construction take place on this land, a continuous Israeli settler presence will be established from occupied East Jerusalem to the Jordan Valley, effectively cutting the West Bank in half and severing East Jerusalem from the remainder of the occupied West Bank.”

How does Israeli policy in E1 impact Palestinians on the ground?

“These communities have been living in the region for decades in what are termed ‘unrecognized’ villages. Demolition orders have been issued over the years for most of the buildings in these communities. None of the communities are linked to the power grid and only about half are connected to running water. They receive no basic services such as health care or education. The residents pursue a traditional way of life based on shepherding, even though their access to pastures and markets is limited.”

“Many homes in the Jahalin communities have been destroyed by the Israeli military, and most others, as well as two primary schools, have demolition orders. The communities also suffer from recurring Israeli settler attacks on residents, including children, as well as on homes and water supplies. Those who commit these acts benefit from near-total impunity.”

Who has condemned Israel’s plans for E1?

“The very raison d’être of the Israeli settlements in occupied territory – the creation of demographic facts on the ground to solidify a permanent presence, a consolidation of alien political control and an unlawful claim of sovereignty – tramples upon the fundamental precepts of humanitarian and human rights law.”

“The Israeli settlements are the engine of the occupation… They are responsible for a wide range of human rights violations against the Palestinians, including land confiscation, resource alienation, severe restrictions on freedom of movement, mounting settler violence, and racial and ethnic discrimination.

“Most seriously, the purpose of settler implantation – rupturing the relationship between a native people and its territory – is the denial of the right to self-determination, which is at the very core of modern human rights law.”