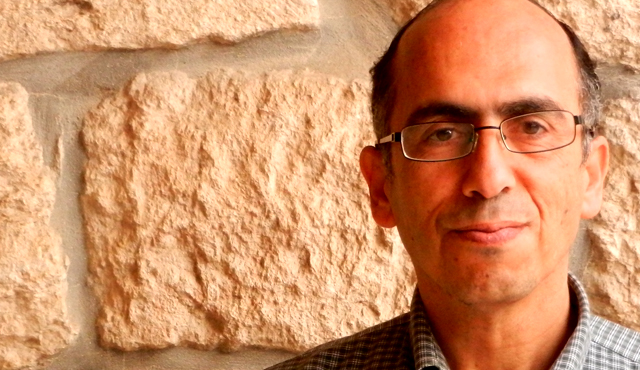 Accomplished scientist and author Mazin Qumsiyeh nurtured a childhood fascination with nature into a successful career in medical genetics and an active lifelong commitment to human rights. "My care for the environment, for all creatures on earth," he says, "translated into my interest in human welfare."

This care led him to a PhD in Biology at Texas Tech University and associate professorships in genetics at Duke and Yale universities before moving on to medical consulting in New York and New Jersey. It also thrust him directly into organizing and educating for Palestinian rights in communities around the country.

One of the accomplishments Mazin Qumsiyeh takes most pride in is his role in organizing the Wheels of Justice tour - a biodiesel bus that transports speakers to give talks at venues around the country. In recent years there have been thousands of educational engagements by the tour to address war and occupation in Iraq and Palestine. Qumsiyeh reports that in the past seven years, "I gave over 800 talks -- in places from grade schools to universities to churches, mosques and synagogues."

In 2006 at the World Economic Forum, Qumsiyeh's paper on non-violent resistance to Israel, "Boycott Israel," published in the forum's official magazine generated considerable controversy and was eventually censored. "They literally denounced it at a press conference and pulled out all remaining printed versions from the magazine." He notes, however, that the paper accomplished its purpose as it generated discussion about non-violent resistance to Israel's occupation.

Not all his work is censored. "Sharing the Land of Canaan" and more than 120 scientific papers in fields ranging from natural history to evolutionary biology and medical genetics have made it into print.

Qumsiyeh is currently assisting with the August 2008 Popular Palestinian Conference on the Nakba. Born in Beit Sahour in 1957, just nine years after the Nakba, which he terms the "catastrophic ethnic cleansing of Palestine," he and his family now have difficulty returning home. A holder of the "so-called residency identity card issued by Israel," he chafes at the injustice of being limited only to the areas permitted Bethlehem residents and at being denied entry on his U.S. passport.

Teamwork and the rewards of outreach to other Americans inspire Qumsiyeh to persevere. He takes heart from Archbishop Desmond Tutu when asked for his feelings on Palestine-related work. As Tutu said, this is not "work for a little while, but rather for a lifetime - and for more than a lifetime."